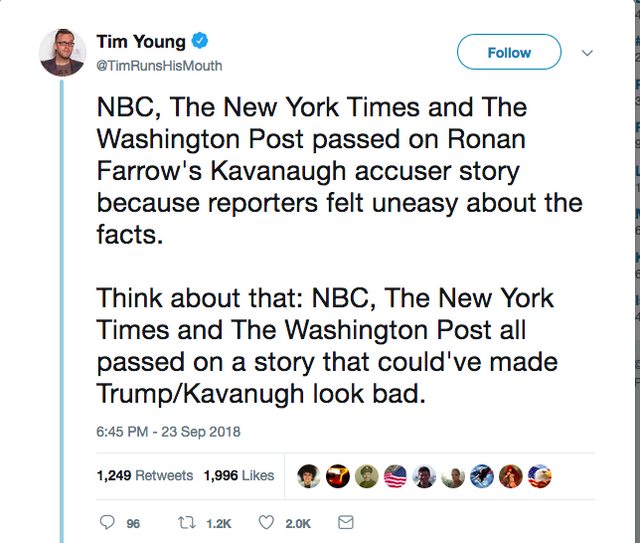 Think about that: NBC, The New York Times and The Washington Post all passed on a story that could’ve made Trump/Kavanugh look bad.

The New Yorker hit piece on Brett Kavanaugh published Sunday night accusing Supreme Court nominee Judge Brett Kavanaugh, without corroboration, of exposing himself to a female Yale classmate at a drunken dorm party in the 1980s was met with skepticism by the New York Times and ABC News.

See also  New York Times Gets More and More Retarded. Op-Ed Literally Argues You Don’t Have to be a Citizen to Vote

The Times reported, but buried, that it had spent a week investing the accusation by Deborah Ramirez but was unable to find an eyewitness and that Ramirez had recently told several of her classmates she wasn’t sure it was Kavanaugh.

ABC News’ George Stephanopoulos repeatedly challenged Ronan Farrow, who co-authored the New Yorker article with Jane Mayer, in an interview Monday on Good Morning America. Farrow was forced to admit he had no eyewitnesses but he insisted that people who knew Kavanaugh at Yale said it was “possible.” Farrow closed the interview by claiming accuser Ramirez insisted she wants to be “fair” to Ramirez.

See also  Tyranny happens quickly if you don’t stay alert and defend your freedom at all times.

Brett Kavanaugh must also be asked about this entry in his yearbook: "FFFFFFFourth of July." We believe that this stands for: Find them, French them, Feel them, Finger them, F*ck them, Forget them. As well as the term "Devil's Triangle." Perhaps Sen. Grassley can ask him. #Basta