The Australian Ambassador sent this letter to AG Barr *in May* offering to help investigate the collusion hoax:

RT so the @nytimes is forced to RETRACT FAKE NEWS: pic.twitter.com/kri5h19AYa

Democrats, Media Wet Themselves Over a New Trump “Scandal” Involving the Australians. …Keep in mind that this interaction with the Australians is yet another illegal leak as well

Just when you thought things couldn’t get dumber, Democrats and the media hand their beer off and go headfirst into another wall.

The background is of course the phone call between Trump and Zelensky, the Ukrainian President. On the call, Trump, after Zelensky brings up Giuliani’s work (which centered on Biden), simply asked if it could be looked into. He doesn’t ask for dirt to be manufactured, he doesn’t mention the 2020 election, and he applies no pressure or quid pro quo to the situation. Yet, we are assured this is an impeachable offense.

Naturally, because the narrative must be formed and solidified, now any foreign interaction involving any request about an investigation is being spun as scandalous.

The latest involves the Australians, who were at the center of the start up of Crossfire Hurricane, the Trump-Russia investigation. In reality, the Steele dossier clearly played a more significant role, but the claims about George Papadopoulos and an Aussie diplomat at a bar have become the go to excuse for why Democrats spent 2016 and beyond investigating a political enemy based on no evidence.

Trump, being the primary target, wants to get to the bottom of this and asked the Australians to cooperate with AG Bill Barr’s ongoing, official investigation into the matter. This set hair on fire across the left because apparently the president can’t even request cooperation in investigations anymore. 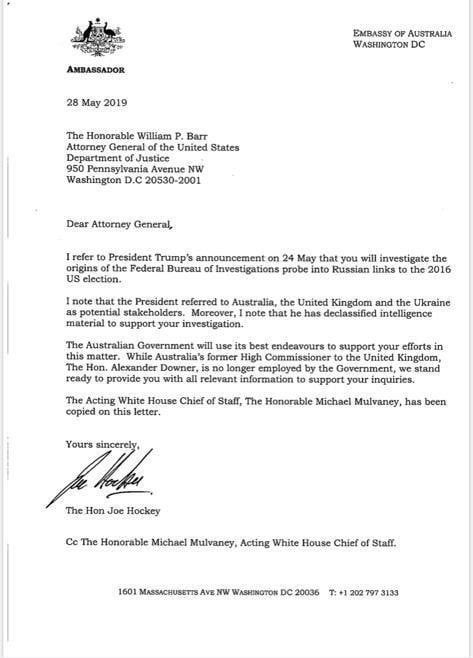