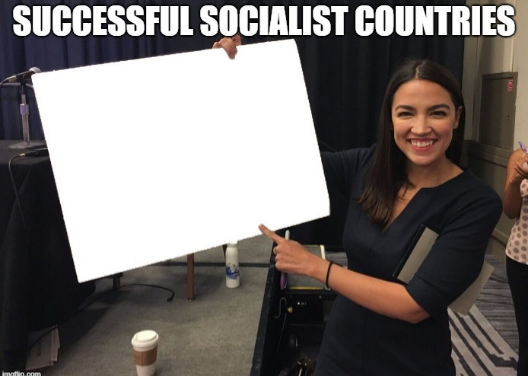 Alexandria Ocasio-Cortez has taken the Democratic party by storm. Although she has only won the primary election in her New York district, she is quickly becoming the face of a new wave of left-wing politicians. These new left-wingers are undoubtedly socialists, so highly baffling views on economics are to be expected. One may think a college degree in economics, which Ocasio-Cortez has, may steer an individual toward rational views on the economy. But as I will show you below, that has almost never been the case.

People with more advanced economics degrees than Ocasio-Cortez have participated in some of the US’s darkest moments. Irving Fisher, a PhD in economics and very influential economist, infamously said that we had reached a “permanently high plateau” in the stock market. Less than a month later, the market began its descent in what would become the most severe stock market crash in history: the stock market crash of 1929.

Modern economists have proven to be just as bad. Ben Bernanke and Alan Greenspan, both with PhDs in economics, infamously told the public that there was no bubble in the US housing market. Of course, this was shortly before the US housing market collapsed, which led to the second worst financial downturn in modern history. These types of gaffes may be stupidity or a way to intentionally mislead the public. Either way, these highly trained economists provide little value to society.

There are bad calls near the top of a bubble and there is just downright buffoonery. Let me introduce you to Paul Krugman. Krugman wasn’t exactly wrong about the housing bubble, but he urged the Fed to replace the tech bubble with the housing bubble. He praised the EU just weeks before their financial crisis broke out. And maybe my favorite of all:

As bad as these economists are, Ocasio-Cortez appears to be worse. She is a socialist after all. In a tweet, she bragged about having an economics degree and then attempted to show off her knowledge by mentioning the Gini Coefficient. The Gini Coefficient is a measure of a nation’s wealth and income inequality (higher = higher inequality, lower = lower inequality). Being a socialist, she wanted to show how unequal the US is. But the GC is terrible at showing overall prosperity. For example, nations with a lower GC than the US include South Sudan, Nigeria, Iran, Kenya, Uganda, Venezuela and many other countries where you would not like to be.

The more she speaks the more she reveals how little she understands the economy. Just look at this clip to see her comprehension of the unemployment rate:

There are many reasons to criticize the official unemployment rate, but Ocasio-Cortez didn’t even come close to explaining them. She also mentions that “capitalism hasn’t always existed in the world and will not always exist in the world.” She may be right about that, but she doesn’t understand that living standards have improved exponentially under capitalism.

See also  Socialist Rep. Alexandria Ocasio-Cortez AOC = We Need More Immigration Because Young People Not Having Kids Due to ‘Burdens of Capitalism’

Overall, Alexandria Ocasio-Cortez is simply one more example, in a long list of examples, of why economics degrees are typically worthless. The problem is that economists are usually not incentivized to come up with any valuable solutions to the world’s problems. When it comes to the economy, I would trust the opinion of someone with a small investment account over the opinion of an economist. The investor has a great incentive to be correct. When they are wrong they lose money. No such incentive exists for economists. Economists and politicians with economics degrees have no skin in the game.