Hedging is a popular trading strategy frequently used by oil and gas producers, airlines, and other heavy consumers of energy commodities to protect themselves against market fluctuations. During times of falling crude prices, oil producers normally use a short hedge to lock in oil prices if they believe prices are likely to go even lower in the future.  However, hedging is far from being a silver bullet that is guaranteed to protect oil producers from volatile markets, something U.S. shale producers understand only too well.

Indeed, many are now unwilling to use this insurance after being slapped with hefty premiums thanks to hedging strategies that recently went awry.

Unfortunately, this also leaves them fully exposed to the risk of ultra-low prices in the future.

Bloomberg has reported that only 50% of shale producers have hedged 2021 production compared to 60% that had done so at a comparable point last year.

Many producers are finding themselves trapped in a Catch 22 situation.

The current WTI price of $32/barrel is still way off the ~$50/barrel that many shale producers require to turn a profit. Hedging at this point would effectively mean foregoing any future price gains and guaranteeing yourself a loss. With production cuts so far working nicely, the recent storage crunch now in the back mirror and economies gradually emerging from lockdown, that appears like a rushed decision.

On the other hand, this oil price rally appears to be running on fumes, and failing to hedge means risking even lower prices in the future. For instance, whereas the WTI June contract has rallied some 75% this month, WTI swap for 2021 has only climbed 10%. This essentially means that traders are very unsure whether the gains being made in the crude markets are here to stay.

The fact that half of U.S. shale producers have actually hedged 2021 production means that they consider there’s a high likelihood of prices sliding lower than current levels. However, they really don’t have much of a choice given that hedging is largely systemic in a bid to satisfy bank requirements coupled with their already high debt levels.

That said, U.S. shale producers are partly to blame for their love for an overly ambitious hedging strategy.

At the heart of the quagmire is a hedging strategy favored by U.S. producers known as three-way collars. These options tend to be a relatively cheap way to hedge against price fluctuations as long as prices remain range-bound. Indeed, collars are essentially costless, a big consideration at a time when expenses are being cut to the bone in a bid to survive.

In theory, hedging allows producers to lock-in a certain price for their oil. The simplest way to do this is by buying a floor on the price using a put option then offsetting this cost by selling a ceiling using a call option. To trim costs even further, producers can sell what is commonly referred to as a subfloor, which is essentially a put option much lower than current oil prices. This is the three-way collar hedging strategy. 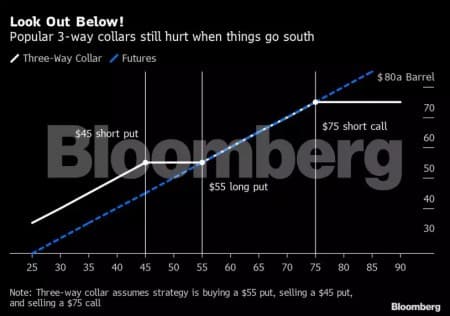 Three-way collars tend to work well when oil prices are moving sideways; however, they can leave traders exposed when prices fall too much as they recently did. Indeed, this strategy fell out of favor during the last oil crash of 2014 when prices fell too low, leaving shale producers counting heavy losses. Most producers turned back to the relatively safe fixed-price swaps but have increasingly been returning to three-way collars.

Pioneer Natural Resources Co. (NYSE:PXD) is one such company. The company converted 85% of its crude derivatives into fixed-price swaps in the aftermath of the 2014 crash but started loading up on three-ways again in 2019.

Over the last two years, Texas-based Denbury Resources Inc.(NYSE:DNR) has also been easing its swap positions in favor of three-way collars. Others that favor this strategy are Parsley Energy Inc. (NYSE:PE) and Occidental Corp. (NYSE:OXY).

Three-ways are a calculated bet that oil will only fall so low but not any further. The last tranche of three-ways mostly employed $45 a barrel was a popular strike level, below which producers became fully exposed.

Obviously, this level was breached months ago.

As Michael Tran, director of global energy strategy at RBC Capital Market, warned back in March, via Bloomberg:

“When you look at three-way collars, given the volatile nature of this market, being knocked out of the market is always a viable threat depending on how quickly prices move. This is an insurance policy that isn’t always guaranteed.”

Even more worrying is the fact that 2021 hedges are likely to reflect current market conditions, meaning producers will be lucky to get anywhere near $45/barrel. This means the vast majority of shale producers could start to feel a really huge liquidity squeeze in the coming year unless oil prices stage a strong recovery this year.