While the news headlines seem uniform in their championing of the employment market we have another stat that shows an interesting story.  There are now a record 95.5 million Americans that are not in the labor force.  These are people that for all intents and purposes, are no longer considered part of the employment market.  Now in many cases we have older Americans retiring but there is something bigger going on.  Since 2009 alone we have seen the number of those not in the labor force increase from 80 million to 95.5 million (this is an increase of 19.37 percent).  At the same time, the U.S. population has only increased by 6 percent.  In other words, those not in the labor force are increasing at a much faster rate than your general growth in the population.  We need to look into this a bit further.

Not in the labor force

It is probably important to first breakdown how labor statistics are calculated: 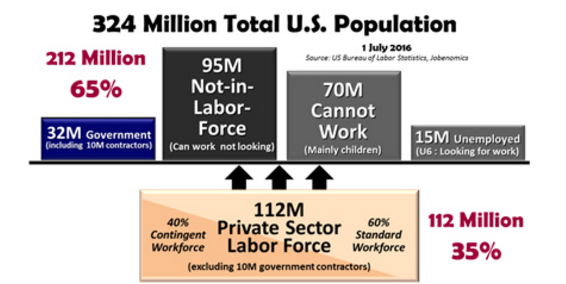 The above chart is older but it is useful in looking at the various buckets.  What you have is 125 million private sector workers supporting the rest of the country (this is the latest figure of those employed).  One critique that I get when I post an article on the topic is usually regarding children.  Well as you can see above, kids are not counted in the figures.  The 95.5 million is actual U.S. adults.

So look at the latest data:

If the economy is doing so great, how is it that we have a record 95.5 million Americans not in the labor force?  That is an incredibly large number.  And as we first brought up, this is not simply because of baby boomers retiring (as you now know the new retirement model is working until you die since most have very little to no money saved for retirement).

It is important to note that many of these added jobs are also lower paying jobs:

“(Jobenomics.com) According to the Kauffman Foundation, these fleet-footed startups account for 50% of all new jobs created.  Uber, Lyft, Airbnb, SpaceX, WeWork, and Pinterest are recent examples of unicorns—a startup company that rapidly achieves a stock market valuation of $1 billion or more. A gazelle is a high-growth company that increases revenues by over 20% per year for four-plus years. The top-10 U.S. gazelles include Natural Health Trends, Paycom Software, Lending Tree, ABIOMED, MiMedx Group, Facebook, NetEase, Ellie Mae, Amazon.com and Arista Networks, according to Fortune magazine.”

This is an interesting trend for our workforce.  You have unicorn companies that create a small group of uber elite winners and a large army of gig economy workers (i.e., Uber, Lyft, Airbnb, etc).  It is telling that we have nearly 100 million people not in the labor force (about one-third of our country).  And this isn’t coming from some biased source:  this is coming from the BLS and other government sources that we’ve used over multiple decades and Democratic and Republican administrations.