by Jesse
Apparently the Banks have been lobbying heavily, and expending significant amounts of money again, leaning on their Congressmen and pressuring regulators, saying that their capital standards need to be relaxed so that they can make more loans to stimulate economic growth.
But that, according to the FDIC Vice-Chairman, is utter nonsense.

“Hoenig, who was a high-ranking Federal Reserve official during the crisis, cautioned Senate Banking Committee Chairman Mike Crapo and the committee’s senior Democrat, Sherrod Brown, “against relaxing current capital requirements and allowing the largest banks to increase their already highly leveraged positions.”
Using public data to analyze the 10 largest bank holding companies, Hoenig found they will distribute more than 100 percent of the current year’s earnings to investors, which could have supported to $537 billion in new loans.
On an annualized basis they will distribute 99 percent of net income, he added.
He added that if banks kept their share buybacks, totaling $83 billion, then under current capital rules they could boost commercial and consumer loans by $741.5 billion.
‘While distributing all of today’s income to shareholders may be received well in the short run, it can undermine their future returns and weaken the growth outlook for the larger economy,’ he wrote.”
Reuters, Payouts, not capital requirements, to blame for fewer bank loans: FDIC vice chairman

The Banks are spending a substantial amount of their current income on dividends to shareholders and very large stock buyback programs designed to increase their share prices.
The chart below shows in the first column the almost shocking Payout Ratios being maintained by some of the Banks.
In the second column there is an estimate of how many more loans the Banks could have made at current capital requirements if they had not spent their cash buying back their own shares.
Since Bank managers are personally heavily rewarded on the share price of the Banks through bonuses and share options, the cause of this is clear.
There has been insufficient reform in the Banks.  Lending and basic banking would better function like a utility, with much more efficient and effective levels of risk management.
Basic banking including loans and deposits ought not to be an adjunct or cover for the kinds of speculation and gambling with other people’s money that led to the last financial crisis that brought the global economy to its knees.
This problem was addressed by Glass-Steagall and functioned very well, keeping the banking system essentially sound for almost seventy years, until it was repealed under the Clinton Administration in conjunction with a Congress all too willing to sacrifice the interests of their voters to Big Money.
And that is why Hillary lost the presidential election, and why the Democrats are in a steady decline as a political party despite the ability to raise huge sums of money from their wealthy patrons. 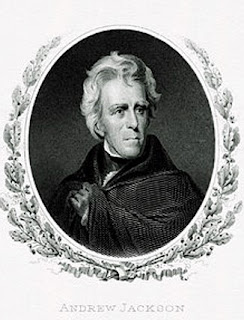 “If at times his [Andrew Jackson’s] passionate devotion to this cause of the average citizen lent an amazing zeal to his thoughts, to his speech and to his actions, the people loved him for it the more. They realized the intensity of the attacks made by his enemies, by those who, thrust from power and position, pursued him with relentless hatred. The beneficiaries of the abuses to which he put an end pursued him with all the violence that political passions can generate. But the people of his day were not deceived. They loved him for the enemies he had made.
Backed not only by his party but by thousands who had belonged to other parties or belonged to no party at all, Andrew Jackson was compelled to fight every inch of the way for the ideals and the policies of the Democratic Republic which was his ideal.
An overwhelming proportion of the material power of the Nation was arrayed against him. The great media for the dissemination of information and the molding of public opinion fought him. Haughty and sterile intellectualism opposed him. Musty reaction disapproved him. Hollow and outworn traditionalism shook a trembling finger at him. It seemed sometimes that all were against him—all but the people of the United States.
Because history so often repeats itself, let me analyze further. Andrew Jackson stands out in the century and a half of our independent history not merely because he was two-fisted, not merely because he fought for the people’s rights, but because, through his career, he did as much as any man in our history to increase, on the part of the voters, knowledge of public problems and an interest in their solution. Following the fundamentals of Jefferson, he adhered to the broad philosophy that decisions made by the average of the voters would be more greatly enduring for, and helpful to, the Nation than decisions made by small segments of the electorate representing small or special classes endowed with great advantages of social or economic power.
He, like Jefferson, faced with the grave difficulty of disseminating facts to the electorate, to the voters as a whole, was compelled to combat epithets, generalities, misrepresentation and the suppression of facts by the process of asking his supporters, and indeed all citizens, to constitute themselves informal committees for the purpose of obtaining the facts and of spreading them abroad among their friends, their associates and their fellow workers.”
Franklin D. Roosevelt, Jackson Day Dinner Address, Washington, D.C.
January 8, 1936

It is telling that the current crop of Democratic Party plutocrats want nothing to do with the policies of Jackson or Roosevelt.  I would like to think that they are merely mistaken.   But it is clear that they are serving the corporate masters of Big Money that they love the most. As for the Republicans, they have long ago betrayed their roots, and seem to be beyond all hope of reform.

READ  US consumer prices jump by most in nearly 9 years; gas and food costs continue to rise
1,033 views