Many articles have been written this past year about the impending demise of OPEC. Shale oil, it has been argued, has ended the cartel’s stranglehold on oil prices.

There’s some truth to that argument, but it also understates OPEC’s dominant position in the oil market.

I often try to imagine the decisions I would make, given OPEC’s situation and the unexpected emergence of U.S. shale oil production. For decades, OPEC has had the luxury of looking at the global supply and demand outlook, and raising or cutting production as they saw fit.

But then the U.S. unexpectedly became the world’s fastest-growing supplier of new oil production. 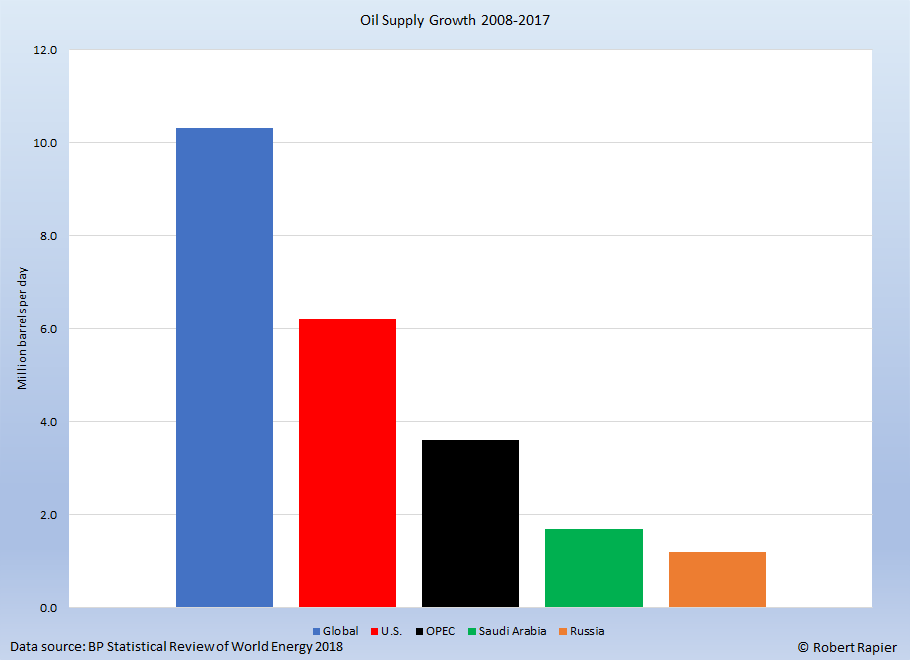 Five weeks after that Thanksgiving 2014 announcement, oil prices had dropped into the $40s (after already sliding from ~$100/bbl to the upper $70s over the prior four months). Indeed, OPEC realized its dilemma, and in 2016 the cartel made an agreement with several non-OPEC countries (most importantly, Russia) to cut oil production by 1.8 million BPD.

That was a significant cut, and oil prices ultimately recovered back to the $70-$80/bbl range. But as I noted in an article last year, U.S. production growth could potentially offset those production cuts in a little over a year.

They did. In the past 12 months, U.S. oil production has grown by 1.95 million BPD. This continued growth again puts OPEC in the position of either cutting production to balance the markets, or in potentially letting the price crash. The latter approach had some limited success in 2016, as U.S. production did dip in response to the price war. But as soon as prices recovered, so did U.S. production.

Total production from OPEC and Russia is more than 50 million BPD. In theory, they should have substantial pricing power, but the rapid growth of U.S. shale oil production continues to give them headaches.

See also  US Workers Made Only 8 Cents More Per Hour, Inflation-Adjusted, Than In January 1973 (While Real Home Prices Soar)

Related: Oil Rises On Hopes Of A U.S.-China Trade Deal

It is certain that the U.S. oil production surge broke OPEC’s stranglehold on global oil prices. If the shale oil boom in the U.S. hadn’t happened, OPEC and Russia would have enjoyed the fruits of $100/bbl oil for the past decade. The U.S. trade deficit would have ballooned.

So now OPEC has to look at the supply/demand picture and try to estimate just how much further U.S. production can expand. If we are reaching the limits of shale production growth, then OPEC can go through a couple of cycles of production cuts, and they will be back in the driver’s seat.

But if U.S. production can expand for another decade, OPEC will have lost complete control over oil prices. In that case, U.S. production will likely only slow when electric vehicles are starting to take a serious bite out of global oil demand.

Speaking of which, oil demand continues to grow at more than 1 million BPD every year. That helps mitigate the impact of U.S. production growth. But as long as U.S. production grows annually at a faster pace than global demand — which it has several times in recent years — OPEC is going to have to live with either production cuts (which also help prop up marginal U.S. producers) or lower prices.