The demographic situation the world faces is unprecedented and unparalleled in modern history.  All the deaths of the past few centuries warfare were blips on the radar compared to what is taking place now.  Given the infinite growth economic model, the situation is beyond repair and no repair will be attempted.  The only goal is extension of the current model with its clear winners and losers.
To make my point, I roughly split the global population into equal halves.  The half of the world inhabiting consumer nations versus the other half in non-consumer nations (previously detailed HERE).  Consumer nations have per capita gross national incomes above $4,000 annually or an average of $16,000.  Non-consumer nations have gross national incomes below $4,000 annually or average incomes of $1,600 per capita.  Given the groups are 3.9 billion (consumers) and 3.8 billion (non-consumers) and the poor have incomes 1/10th that of consumer nations…the fact that the consumer nations consume 85% to 90% of global energy and exports shouldn’t be a surprise.  Consumer nations have nearly all the income, savings, and access to credit.  From an economic standpoint, the non-consumer nations dominate and the non-consumer nations may as well be on Mars.
Two quick charts and then some themes…
Chart below are consumer nations annual change in 0 to 65 year-olds versus annual change in 65+ year-olds, plus the Federal Funds Rate.  Under 65 year-old population growth will cease by 2023 (if not sooner) and turn to large declines indefinitely thereafter.  The annual growth of 65+ year-olds has has been accelerating since 2008 and won’t hit peak growth until around 2035. 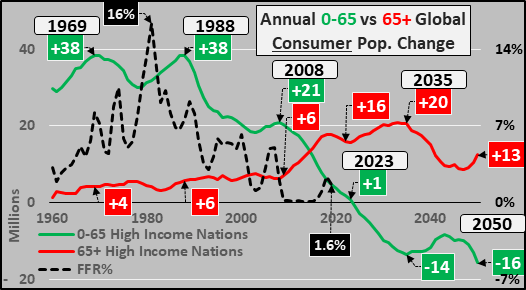 Chart below are non-consumer nations annual change in under 65 versus 65+, and Federal Funds Rate.  Under 65 year-old annual population growth has ceased increasing and is in the process of rolling over to growth of “just” 35 million by 2050.  Non-consumer 65+ year-old population growth is rising and estimated to continue accelerating through 2050. 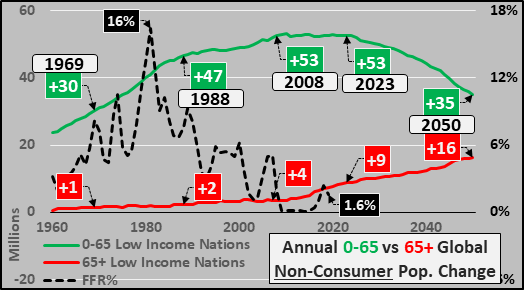 What is the point(s) –
Under 65 year-olds in consumer nations have a high rate of credit consumption.  65+ year-olds are relatively credit averse and more likely to pay down or pay off existing loans than to undertake new loans.  Those elderly that do undertake new debt do so at relatively low levels.  Simply put, in our fractional reserve banking system, the bulk of “money” in the economy is lent into existence by a rising quantity of loans.  But the data is clear that those who undertake new loans (create new money) will be in indefinite decline, while roughly equally and oppositely, those that pay down or pay off existing loans (destroy existing money) will take their place.
During the current cycle, corporate debt, student loans, and vehicle loans have done much of the heavy lifting in new debt creation.  However, all three sources of new debt are already “over-utilized” and only new vehicles (plus credit card debt) is likely to grow among the elderly.  Where will further debt (“money supply” growth) come from as that the quantity of potential working age persons to undertake new credit, and thus organically grow the “money supply” (let alone consumption), has decelerated by over 90% and is set to begin declining very soon?

Thus, there are two options to continue growing debt (aka, “money”).  Either encourage the continually fewer working age persons among consumer nations to take out ever more debt (via perversely paying borrowers with NIRP or similar to undertake new loans) and/or central banks ZIRP, NIRP, QE, and acronyms yet to be invented will all have the express purpose to destroy assets (purchasing bonds, stocks, etc. that are never to return to the market) and replace them with newly printed “money” which will chase the remaining assets higher.  This monetization is to avoid a free-market from pricing assets based upon a declining quantity of buyers and fast increasing quantity of sellers.

It is the progressive and degenerative fundamental weakness that is the basis of the observed economic and financial market “strength”.  Of course, the policy of centrally directing asset appreciation has clear winners (a declining quantity of institutions, asset holders, federal governments) and losers (a fast growing quantity of young, poor, working class, and those with few or no assets).