Here we go again. Yet another mini-scare that the Bank of Japan will take their foot off the accelerator. From Bloomberg:

A dramatic day for Japan’s debt market saw yields surge on media reports of possible changes to the nation’s ultra-loose monetary policy, spurring the central bank to offer to buy an unlimited amount of bonds.

The yield on 10-year government securities soared as much as six basis points to 0.09 percent, its biggest increase in almost two years, pulling the yen higher and weighing on stocks. While the yield came down after the purchase offer by the Bank of Japan, it then bounced back to just one basis point below the day’s high.

Any change to BOJ’s stimulus would be the first since 2016 when it introduced control of the yield curve in a bid to manage the impact of its bond purchases and negative interest rates. 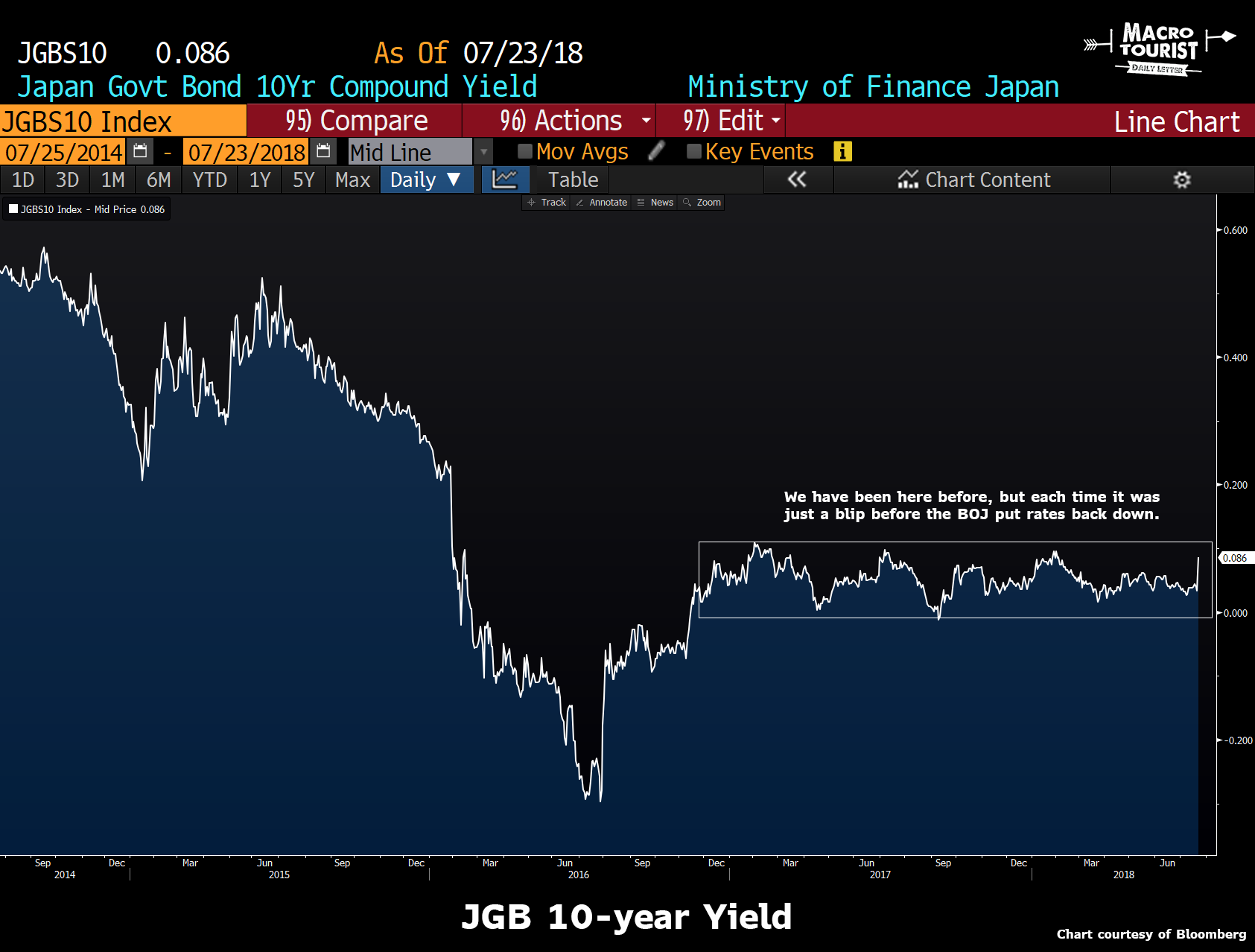 I understand all the reasons why traders might think the BOJ would be eager to let their yield-curve-control policy expire. The flat yield curve is making it tough on Japanese banks. It hampers any price discovery for the long end of the JGB market. In fact, the policy makes a mockery of Japanese bond markets.

Well, guess what? The Japanese don’t have a bond market anymore. According to Japan Macro Advisors, the BoJ hold almost 50% of the outstanding JGBs: 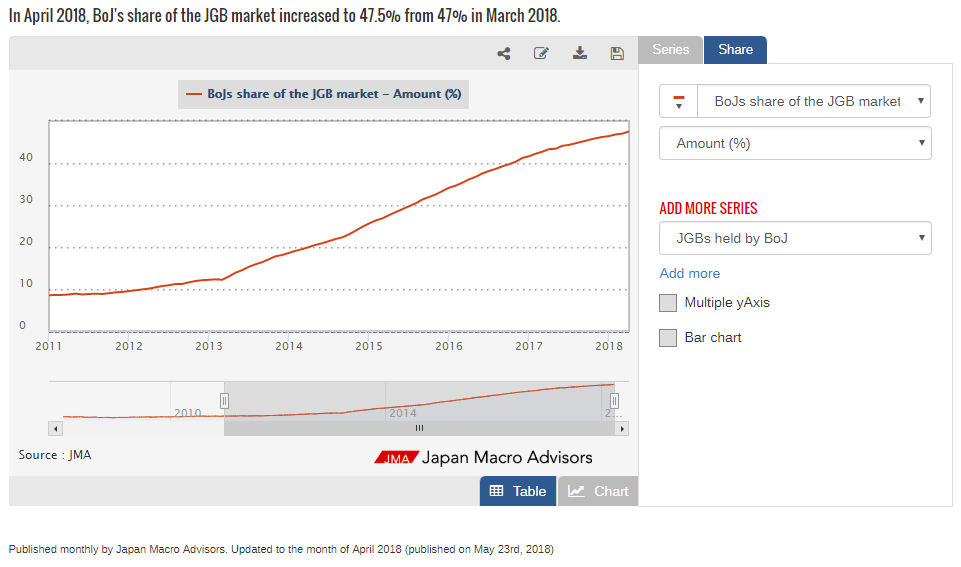 When you add in the amount held by pensions and other retirement funds, it becomes obvious the Japanese bond market is a market in name only. The price is completely set by the BOJ. And yeah, while it is tempting to believe the Bank of Japan would like to see the bond market relieved of their manipulations, that’s a pipe dream.

Since the introduction of Abeconomics, the Bank of Japan has ballooned their balance sheet from 25% of GDP to almost 100%. 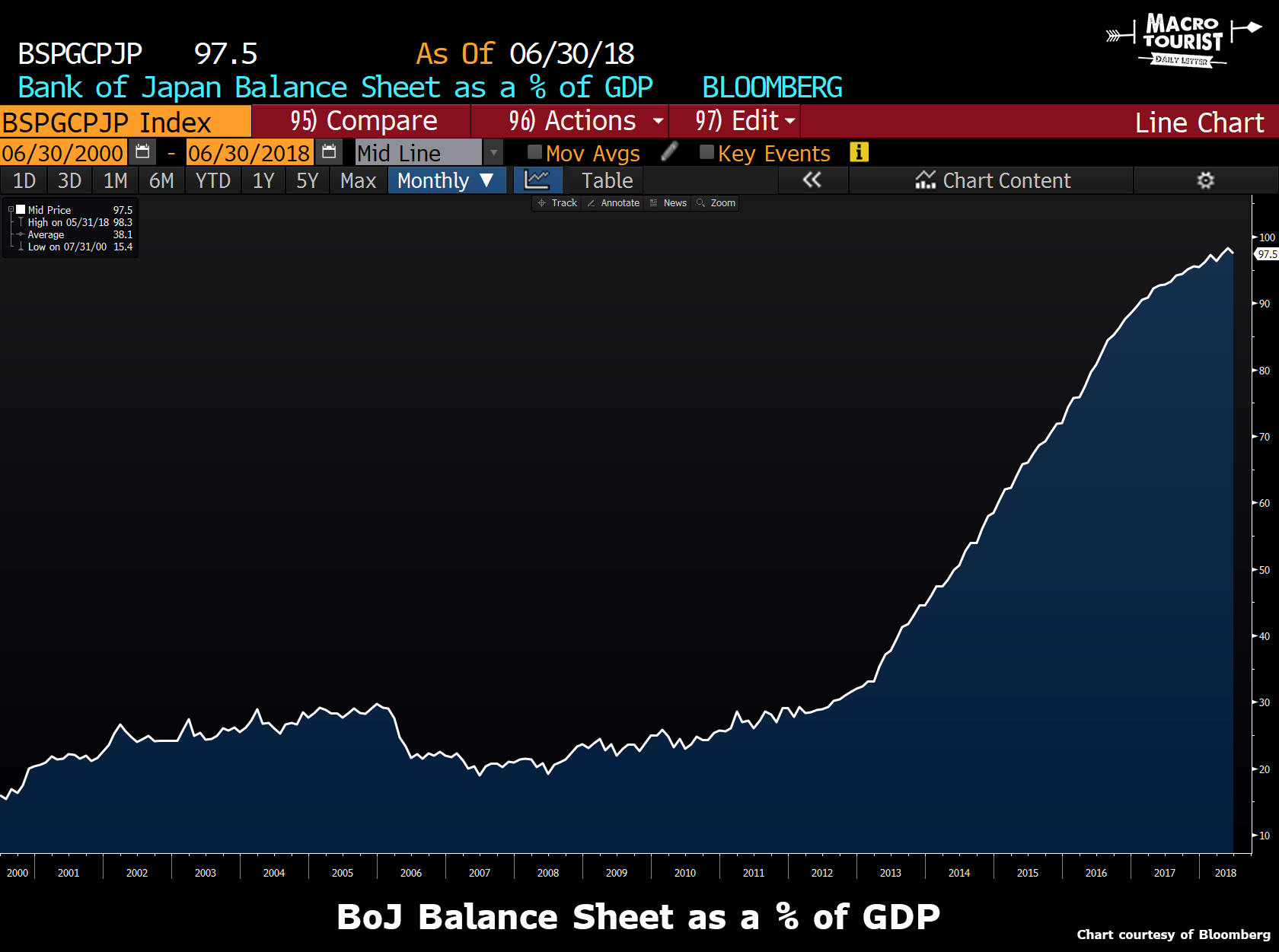 To think the Bank of Japan will suddenly get cold feet and abandon their policy is lunacy. They’re all in.

Don’t forget that Japan has been struggling with disinflation (and even deflation) for the better part of two decades. Prime Minister Abe was elected in the aftermath of the Tsunami tragedy which caused a devastating deflationary feedback loop that sent the Yen to record highs. It took a terrible disaster, but that was the final straw. The Japanese people finally had enough. They took to balance sheet expansion and currency devaluation in a way that hadn’t been seen in almost a hundred years.

The timing for pausing is all wrong

Do you really think it probable the Bank of Japan abandons this policy at the very moment when the Chinese are actively devaluing their currency due to the ongoing Trump trade-war (skirmish)? 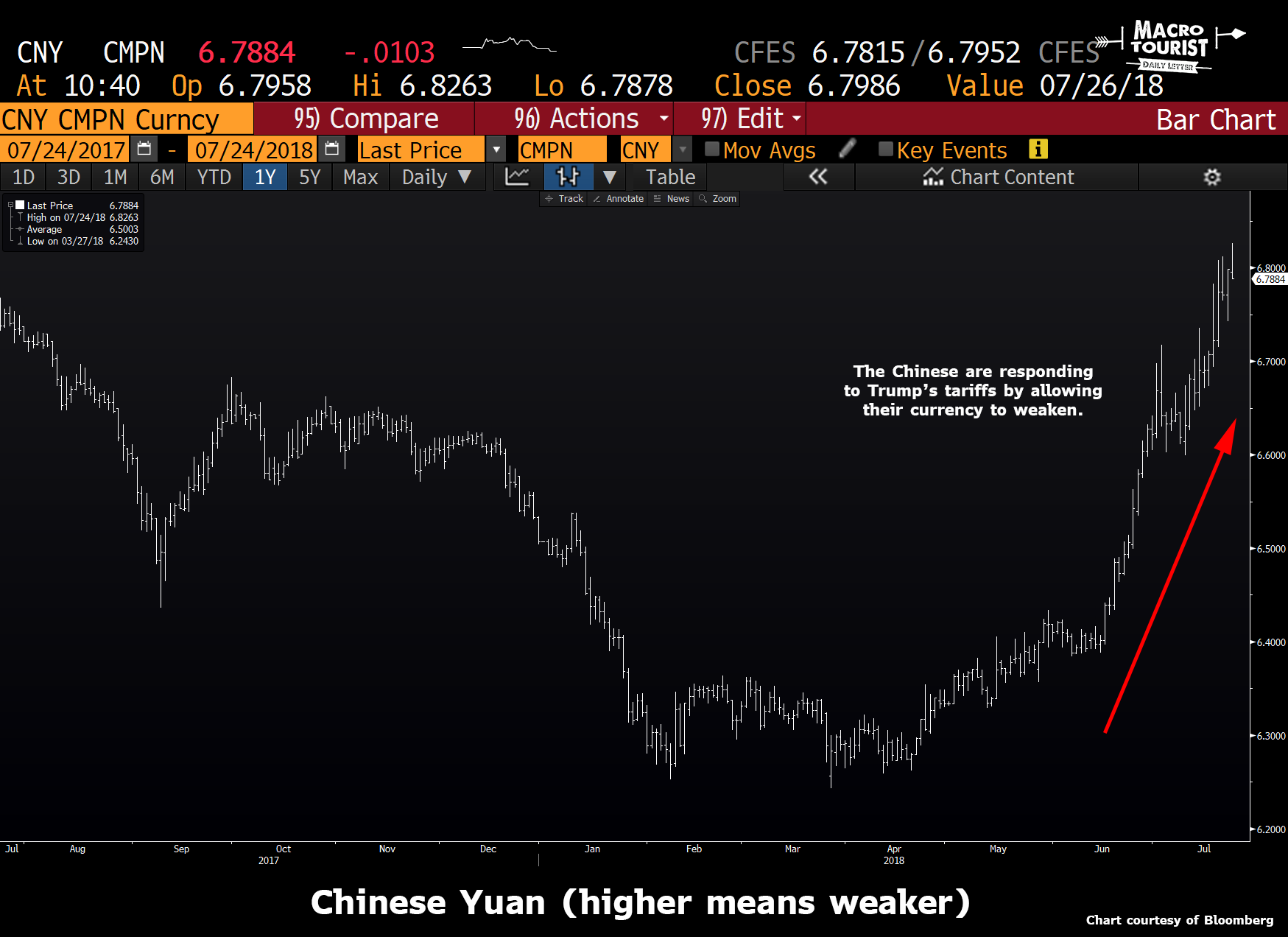 China is responding to Trump’s tariffs by allowing their currency to weaken. To some extent, the same thing happened when Trump aggressively went after Mexico. All the supposed gains for American companies were offset by a Peso which depreciated materially in the wake of the increased Trump trade-war rhetoric.

It would be economic suicide for Japan to attempt a throttling back of their monetary stimulus in this environment. The Yen would skyrocket and undo years of gains.

Nope. It ain’t going to happen.

If the BOJ decides to allow the long end of the yield curve to rise because of concerns for their banking system’s health, they will institute another policy at the same time that more than offsets any tightening. That might mean buying more ETFs or some other previously unheard of Central Bank scheme, but there is little chance the BoJ will choose this moment to wind back stimulus.

The market wants the Bank of Japan to stop their yield-curve-control. Market participants desperately desire markets to return to their old roles as price discovery mechanisms. That’s like pining away for an old flame to change their mind and come running back. It only happens in the movies. In real life, they marry someone better, end up having the perfect family and a terrific career while you stare uselessly at your social media feed wishing it was like the old days. So stop trying to time the end of the Bank of Japan’s stimulus program. It’s going to keep going until something really bad happens that the Central Banks cannot control. Until then, more cowbell!!!