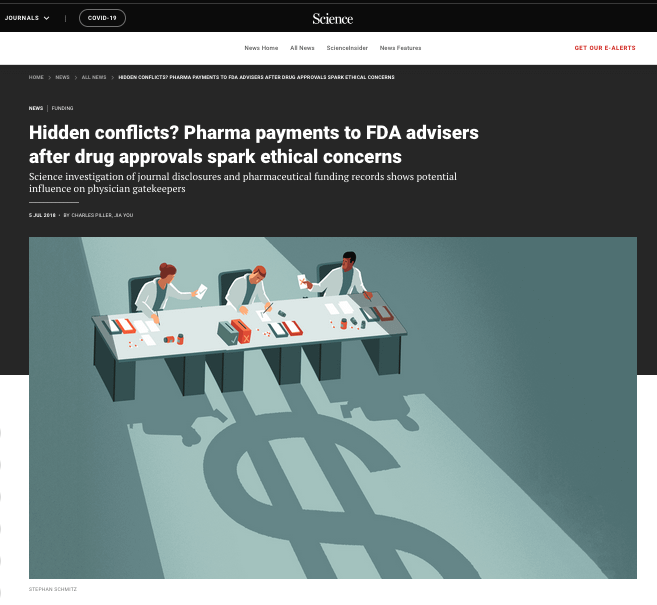 Kickbacks/pay-offs happening years later go largely unnoticed and entirely unregulated. This Science.org study reveals what is probably just the tip of the iceberg in Pharma/FDA corruption.

“I fully realize that when I’m paid by somebody, like every other human being, that may affect the way that I think about things. So I’m not naïve,” Granger says. But the expectation of future support from the makers of antipsychotics, he adds, did not influence his assessments of Seroquel or similar drugs. Granger says he recommended the drug’s conditional approval after becoming convinced—as were nearly all others on his panel—that Seroquel’s value outweighed its risks for some people with severe psychiatric disabilities.

The next year, in 2010, AstraZeneca paid the government $520 million to settle lawsuits involving alleged improprieties in the company’s clinical trials and improper marketing of Seroquel for unapproved conditions. The company, which denied wrongdoing, pulled in more than $5 billion in revenues from the drug that year. In 2011, after mounting evidence of sudden cardiac deaths, FDA forced AstraZeneca to add a warning to Seroquel’s label that the drug posed risks of fatal cardiac events when combined with certain other drugs. Sitko died 3 weeks later.