Hello, so I follow the Kelly Criterion, meaning that I yolo most of my money on plays that I have high conviction on. Since 90%+ of my portfolio is tied up in another play, I didn’t plan on posting anything until after. However, some SKIN calls recently paid off and now I have money for a pretty large side bet. So I’m going to introduce a stock that caught my eye. But, before I begin I want you all to watch this educational video on how Hedge’s take your money:

The Barclays Trading Strategy that Outperforms the Market

Since I didn’t release anything on NEGG until the last second, and didn’t have the time to write up a DD on SKIN before the moon, I wanted to change it up and inject some new blood into the pool. I have a theory that a lot of stocks on this sub are built on the backs of bagholders, so anytime I post a DD I want to make sure the setup is especially juicy and the calls cheap. Loss porn is cool and all, but it’s depressing – I’m looking at you UPST bro, I warned your ass to chill.

This isn’t RIDE, WKHS, WISH, CLNE — this is PAYA a stock with juicy profit margins, crazy revenue growth, and an asymmetric gain opportunity in the short term because calls are cheap, with whales already jumping in slapping big dick energy down on OTM calls.

Eerily, this stock has not been mentioned on reddit or any of the regular places I check for mentions, even though they 1) murked earnings and raised guidance, 2) analysts keep upgrading their PTs, 3) announced on Friday a cashless redemption catalyst on Sep 10, and 4) institutions are loaded to the tits with shares (118%+)

This institutional share anomaly will be deep dived later – but surprise surprise, since the institutions who own all the shares are investment management firms who generally buy and hold, the float is illiquid; since, without an actively traded float there is essentially no float. Lastly as always there is a short angle for extra salt.

When you read this DD remember the video I posted; people are watching 👀, so take profits this time and cut your losses if you FOMO in at the last second. I wouldn’t be posting or throwing money down on calls unless I had a good amount of conviction that this pays out.

Here’s the tldr summary for what’s up

PAYA is a payment processor that has done close to $35bn in payments in 2020, projected $40bn in 2021 and is growing at a fast pace. They work through vendors, resellers, independent sales organizations, developers, etc, etc, etc., and have a bunch of different offerings depending on the sector of business, while their projected upward revenue is intense.

There’s a lot to deep dive into, but it’s solid company. So solid that institutions are picking up as many shares of PAYA as possible. Their recent Q2 ER presentation showed off their stellar earnings growth. It’s hard to name other companies with permanent relevancy that have over a 50% gross profit margin. 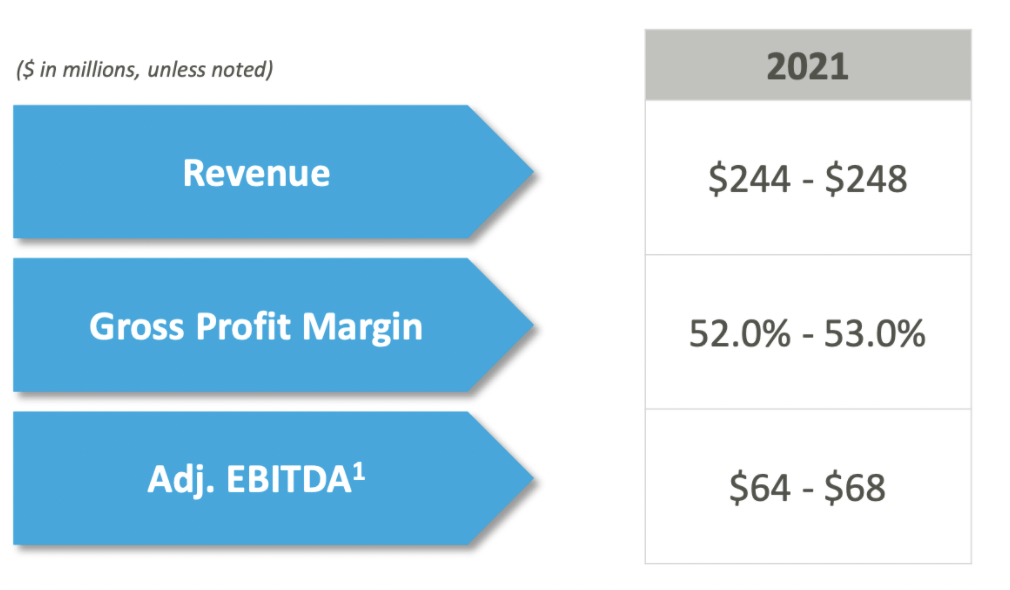 Since the economy has reopened, PAYA’s profit margins have only been growing. Unlike most tech companies, they are not a one-and-done situation but will have permanent relevancy in the post-Covid world. In fact, they are a top-20 payment provider in the US.

BTIG, Truist, Cannacord, and Credit Suisse have all given PAYA bullish targets with an average 56% upside. Meanwhile, institutions have just been pouring into this stock and buying more while increasing price targets.

Okay, so this is getting good. So institutions obviously can’t hold more than 100% of shares – this is probably a small error in delayed reporting and maybe some brokers miscounting a handful of tranche locked up shares.

However it is very likely that institutions hold near-100% of all shares. The entire volume over the last 6 weeks since Q2 reporting was only 28 million shares. The largest holder, GTCR didn’t sell a share, Blackrock bought 150% more, and every single other major institution holder that reported for Q2 so far increased their positions. 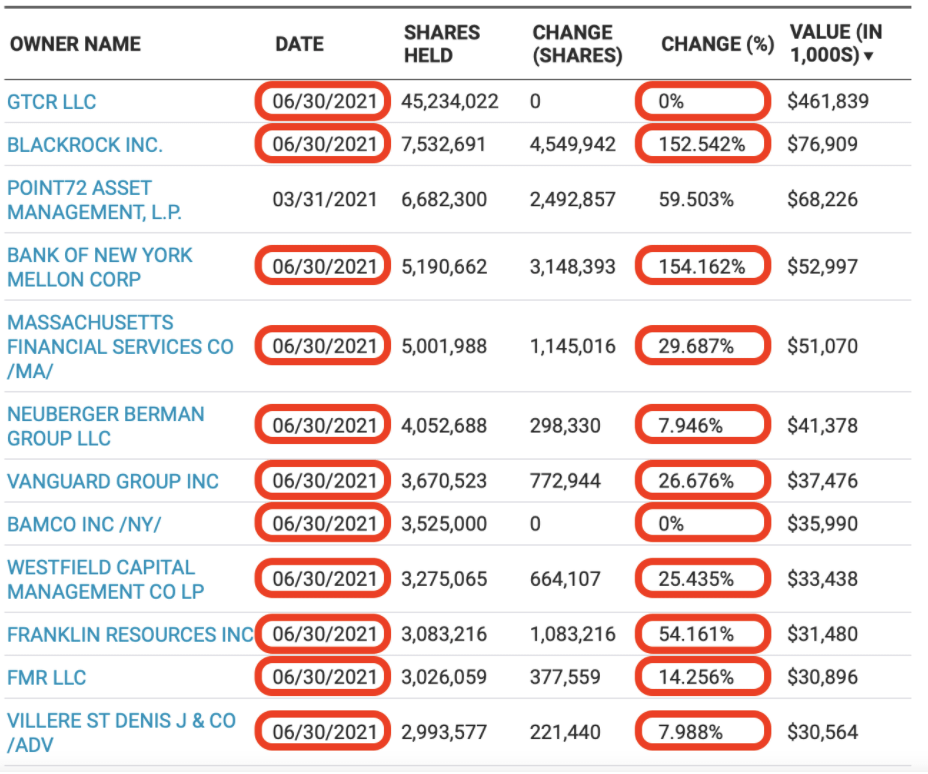 Figuring out just how small the float is relevant to figuring out what kind of corner shorts have put themselves in. Luckily we have some good pieces of info to guide us-

If nearly all shares are held by institutions, then obviously the float is highly restricted. Since we know the exact number of shorts via FINRA, we can figure out real short interest in relation to the float at different institutional holding levels.

After all my time in highly illiquid stocks like NEGG and others that can’t be named, it’s obvious PAYA’s float is super tight, and it seems pretty plausible institutional holdings are likely around the 90% range, if not higher. This would correlate to a 60%-118% short percentage of the effective float.

Additionally, from the FTD viewpoint you see a spike in FTDs with the price bleeding up. To me this indicates tight short constraints, and combining with what we already know leads me to the belief that there may be a supply issue. SI doesn’t have to be balls to the wall for it to matter, sometimes supply-side issues are there but not reflected in the raw SI data (e.g. NEGG, AMC). I believe that this is why it is labeled as “Hard-to-Borrow” on TdAmeritrade and Charles Schwab rn.

I guarantee these shorts don’t realize that their positions are ticking time bombs due to the illiquid nature of the stock. They probably don’t even have a fundamentally negative view of the company and are just actively trading in and out of the stock. Spoiler: it won’t end well

A lot of negative price sentiment came from market pricing in an 18mil eventual share dilution via warrant exercises. This would have been a –15% share dilution of current shareholders.

Turns out PAYA is doing well enough that they are forgoing $200 million to protect share value by buying back their warrants. This is pending a vote due on Sep 10 where they already have 63.5% of “yes” votes.

For those unfamiliar with the process here, I’ll explain. Since PAYA was originally a SPAC, it has warrants. A warrant is basically a call option with a strike price of $11.50 and a 5 year term. As stated in their S1, PAYA originally issued 17.7mil warrants (which would eventually dilute into the stock), however last week they dropped the news that they would be calling for a “cashless redemption” of the warrants at a ratio of .26 shares per warrant, and changing the dilution from the long established 17.7mil to 4.6mil.

This is bullish because 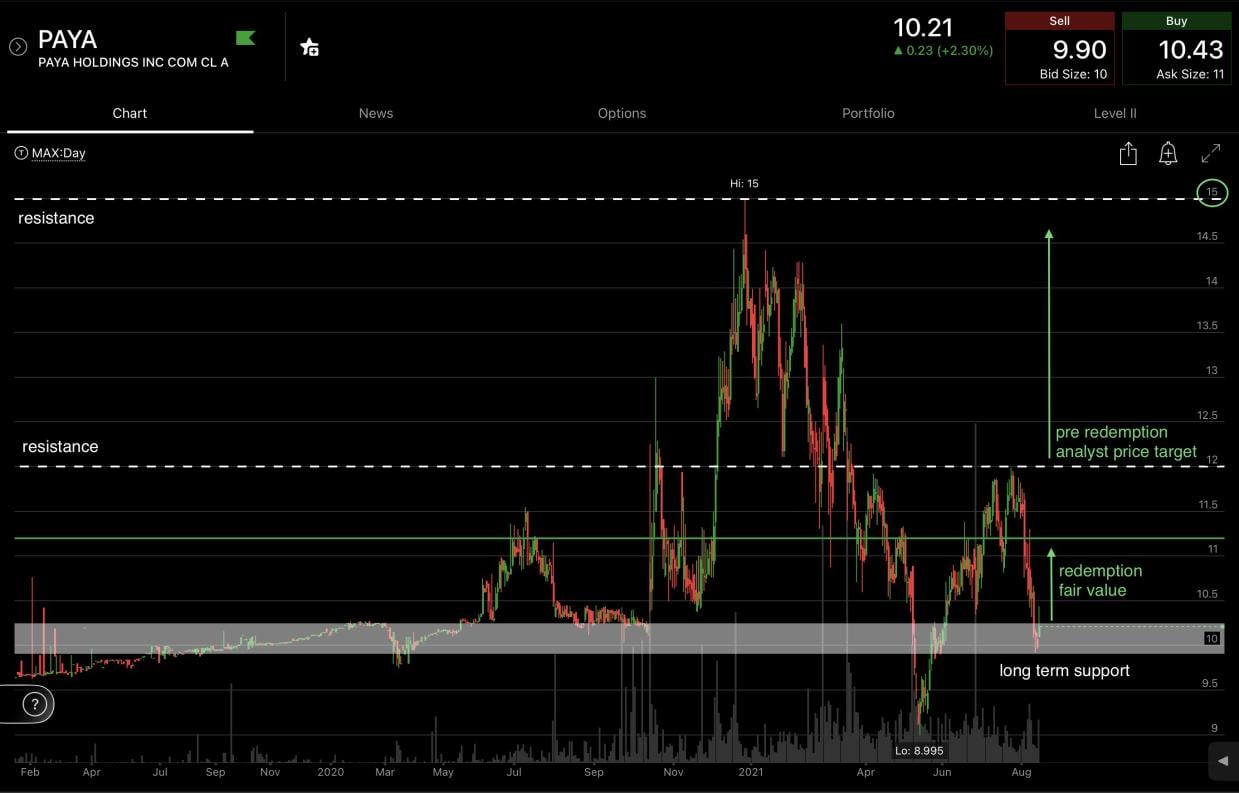 Part 4: The Short and Long Play

Fair value is at least $16.65 based on analyst coverage, warrant cashless redemption, and fundamental growth profit margins growing at 42% YoY. They provide services that are growing exponentially and will remain in high demand for decades + their stock has received a ridiculous number of valuations all 46% higher than current valuation before the warrant redemption news hit.

There is still an immediate need for the market to react to the warrant redemption. Upside is at least 11% – from current $10.21 to $11.33 just on the news Friday alone (PSA – the options market has not priced this in at all yet) not even factoring in their massive revenue guidance, short coverings, or other catalysts they have lined up.

The arrows are a RSI oversold indicator, and it looks like earnings FUD is over — repeating the pattern of a rebound it showed in the last earnings. Actually, if you expand to the March 8th earnings you will see the same pattern.

Below is a graphic from an external site that summarizes option flow. It’s filtered on the last 50k orders with premium greater than or equal to 1k. Just based on the flow and ignoring everything else we have extremely bullish premiums, the ask side is outperforming the bid side, with the stock showing an overall bullish sentiment going forward.

I also looked back in time at historical option flow to see when 10k OI for the Aug 10p was opened; someone pointed it out to me that this OI looked suspect af. So, i found that the Aug 10p were opened on March 8th and 9th, and they were met with 10k calls for the Aug 15c at the same time. It seems this action corresponds to a spread trade that was opened after PAYA’s March 8th earnings.

There were also 1k Nov 12.5c calls bought on Friday at the ask (not by me) at a price of 0.45. This explains my position, I just followed the dude/dude’et into the November’s after seeing the price was in a tight consolidation intra-day.

Looking back in history:

These large purchases typically account for most of the option volume for the entire day across all strikes and maturities, and you can see that a good chunk of OI was opened up in the most recent weeks. So, unless it one of you fucks, I’m thinking someone is playing on some inside information or is simply a degenerate (like me). Hence, big dick energy.

Edit: Here is a summary of the flow today

Now will you please bow your heads and join me and my coked out brethen above in a prayer for $PAYA. Dear tendie gods, if you’re listening, we ask that you protect and show favor to the brave WSB warriors who are battling on the front-lines. We ask that you vanquish the demons who’ve been betting against Papaya. And all powerful tendie god, if you grant us victory in this campaign, we vow to enthusiastically share our spoils with various luxury car dealerships, island resorts and yacht rental services around the world. Thank you for the time and consideration. In your name we pray. Amen CoC 🙏