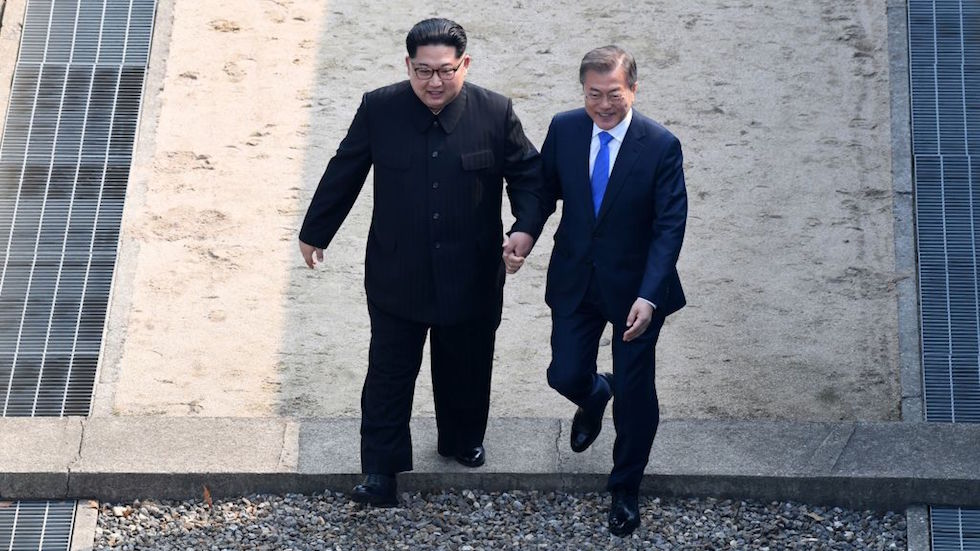 Leaders of North and South Korea met at the end of last week at Panmunjom in the Demilitarized Zone in what the Korean Central News Agency declared a “fresh start” in relations between the two nations, deciding to finally end the 68 year-long Korean War. The meeting included both leaders stepping onto the other side of the border and were seen holding hands and smiling before a candid exchange on matters of peace on the Korean Peninsula.

The world is filled with hope after this pivotal event that could bring much needed calm to one of the hottest areas of conflict. Though many remain skeptical, there remains an undeniable feeling of peace and possibly unification coming between North and South Korea. It remains to be seen if Kim Jong-Un would give up his nuclear arsenal, but recent signs are more than encouraging. President Trump said only time will tell, but went on to say he did not think Kim was “playing.”

Kim recently stated that North Korea will shut down an underground nuclear test site next month and invite experts and journalists to confirm, so said South Korea’s presidential office on Sunday. President Trump is set to meet with Kim within “three to four weeks.” Kim told Moon, the South Korean president, that he had no intention to target either South Korea or the U.S. with nuclear weapons. He has built up his nuclear capabilities merely as an act of self-defense. The recent actions and rhetoric by the leader of the Hermit Kingdom are starkly different from just a few months ago when he was testing missiles regularly and declaring that he had the capacity to strike the mainland of the United States, trading escalating barbs with President Trump.

Furthermore, Kim told President Moon that he would do away with his nuclear arsenal if the U.S. agreed to formally end the Korean War and promise to never invade his country. The Trump administration proceeded cautiously to this recent chain of events, remaining optimistic but realistic about reaching a deal with North Korea over denuclearization.

We’ve been down this road before.

Skeptics continue to warn us that North Korea has made similar promises to denuclearize with no intention of actually doing so in the past. They say Mr. Kim could be stalling for time in order to ease the stifling economic sanctions leveled against his country. But there’s a new sheriff in town that seems to have dramatically changed the dynamics on the peninsula.

“I know the Americans are inherently disposed against us, but when they talk with us, they will see that I am not the kind of person who would shoot nuclear weapons to the south, over the Pacific or at the United States,” Kim told Moon.

In Panmunjom, a glimmer of hope has emerged out of a desolate situation. The circumstances appear to be completely different this time with Trump as president of the United States. In addition, South Korea’s Moon has been a strong advocate for peace with North Korea. And North Korea’s Kim maintains leverage with a capable nuclear arsenal despite the crippling sanctions he is experiencing. Trump called Kim “little rocket man” not too long ago but has since then called him an “honorable man.”

Still, despite this hope, lasting peace cannot become a reality unless the U.S. and China agree to it. The Korean War was a war between today’s two top superpowers. China wants peace along its border. However, the U.S. wants a denuclearized North Korea. And amazingly, Kim has appeared open to that possibility if he can receive assurance that he will not be invaded by the nearly 30,000 American troops stationed in South Korea. Let us pray that Trump’s foreign policy does not become hijacked by the neoconservative Deep State that wants nothing but perpetual war in Korea and around the world.

As soon as next month, we will see just how finely tuned President Trump’s negotiating talents really are. He has taken his aggressive dealmaking style on the world stage and other world leaders are adjusting accordingly. I do not doubt that North Korea would not be coming to the table without Mr. Trump in the White House.

“History — and in particular, the American voter — has a way of calling forth the right person to lead at the right time. Trump is a flawed man — self-indulgent, megalomaniacal, a bit paranoid, driven by self-interest and implacably domineering. But these ‘flaws’ also make him a big character, and as he prepares to confront Kim and the other great tyrants of the age, Americans can feel assured that they have chosen the right man for the moment,” Koffler concluded.

While many claim that we cannot have such an unstable and politically inept individual with his finger on the red button, simply look objectively at what he has achieved so far. He has, through his authentic and increasingly effective “Twitter diplomacy,” done what no other president over the last 60+ years could do: bringing peace to the Korean Peninsula, meeting with the North Korean leader, getting North and South Korea to end the hostilities, and making the peninsula nuclear weapons-free. That’s not to say Trump is solely responsible, but he has played an undeniable role in bringing this all about.

Koffler went on to write, “with realpolitik and raw ambition supreme, Trump is the man for this current age of crisis.” Is there any denying this? Can the Left give the president some credit for this hope for peace? If this were done during a Hillary Clinton presidency or if Barack Obama managed to get this far, there would surely be a tidal wave of positive news coverage claiming them as the greatest peacemaker of all time. But of course, the liberal mainstream media has barely given President Trump any credit for helping get us to where we are today.

An article in the South China Morning Post stated that Trump getting credit for this shift in diplomacy is “arguably justified, given that his belligerent approach – including an open threat last year to unleash ‘fire and fury like the world has never seen’ upon the most isolated country on the planet – may well have persuaded Kim to be more pragmatic.” Kim seems to be coming around to making a deal that keeps him in power, brings peace to Korea, and gets the U.S. off his back. Doing so will require concessions on both sides and we shall see who is willing to give up what. But Trump’s direct rhetorical attacks and military posturing seem to have had a significant effect on the Kim regime.

Perhaps we can even see a Trump-Kim bromance similar to what we saw last week with Trump and French President Emmanuel Macron? Why not? We are living in unprecedented times in many respects. Trump has heaped some praise on the North Korean leader in anticipation for their meeting next month, calling him “very open” and saying he appears to be serious in moving forward and making moves toward denuclearization.

Anne Gearan’s piece in the Washington Post dug into how diplomatic norms are shifting under Trump’s openly brash style. “The dramatic turn of events on the Korean Peninsula was the capstone to a week that crystallized the ways Trump has established his foreign policy approach as one that rests largely on the pride he takes in busting the old conventions of diplomatic negotiations and remaking them in his image,” Gearan wrote. He is different. He is blowing up the old way of doing things. This is why he was elected and this is why he is so effective. The “tried-and-true” ways of diplomacy with North Korea have resulted in the regime having nuclear weapons that can strike anywhere from Seattle to New York City. What Trump does will rub many elites and deranged liberals the wrong way, but one cannot claim that he has not been effective on the world’s stage so far. “The world is adjusting.”

History is being made in the Peace House of Korea. Tremendous first steps toward peace in Korea. Let's not allow the naysayers and Washington/Seoul warmongers to derail the momentum. #KoreaSummit #KimJongUn #MoonJaeIn t.co/cxV27YvUi4

Gone are the days of working through slogging negotiations through secretaries lower down on the totem pole. Trump agreed on the spot to direct talks with Kim Jong-Un. He relishes this one-on-one negotiation. He is putting America first by refusing to be played. In the Reagan-esque “trust but verify” fashion, he is heading into his meeting with Kim with eyes wide open, ready to walk away if necessary but also leaving the door open for a favorable deal to be struck.

Even Senator Lindsey Graham praised Trump on his recent foreign policy successes. The trigger-happy Republican senator from South Carolina was excited about the developments on the Korean Peninsula after decrying Trump’s unorthodox “Twitter diplomacy.”

“We’re not there yet, but if this happens, President Trump deserves the Nobel Peace Prize,” Graham said Friday. If President Obama can win a Nobel Peace Prize for simply being president and promising “hope and change” after being in office for less than a year and accomplishing nothing on matters of international security, surely Trump is a shoe-in if we continue down this encouraging path of peace.

Love him or hate him, President Trump has been instrumental in changing Kim’s strategy to continue down the path to war with South Korea, Japan, and the U.S. He realizes that the situation he is in is quite precarious, even with China’s supposed backing. Pressure from the Trump administration, in tandem with its South Korean and Japanese allies has brought us to this point in time by applying necessary pressure on the North Korean regime while remaining open to negotiating with Kim for a lasting solution to this conundrum.