She’s something, Ocasio-Cortez. At 29 years old, she perfectly embodies her generation’s uniquely irritating combo of self-righteousness and cluelessness. Passionate and charming at first blush, her appeal quickly wears off. In a March Quinnipiac poll her favorability was underwater by 13 points.

What Ocasio-Cortez understands is that, in the culture of social media celebrity, the worst possible thing to do is back down. So, when Pelosi stated the obvious to Maureen Dowd—that for all the attention The Squad receives from the media it is, in the end, four votes—Ocasio-Cortez insinuated the speaker is a racist. And they say liberals oppose nuclear war.

If Pelosi’s racist, then America is in serious trouble. The absurdity of the claim was best expressed by Congressman Lacy-Clay, who is black. “You’re getting push back so you resort to using the race card?” he asked. “Unbelievable.”

Wait, you spelled “entirely predictable” wrong. Identity politics has driven the left for decades — including Pelosi herself:

Throughout her career, Pelosi has made it a point to bring her San Francisco, west-coast elitist politics to the mainstream, and it would be wrong to say that she hasn’t had something of a successful run of it. She’s always pushed the proverbial Overton window further and further to the left, making positions considered extreme seem perfectly acceptable to Democrats and Democrat voters.

Pelosi is the same person who once called illegal immigrants her “constituency” and applauded the idea of illegal immigrants bringing their children into the United States, and pushed hard for amnesty. She pushed for socialized healthcare with the media and activist groups cheering her on and successfully got Obamacare passed. She pushes for higher taxes and sensationalizes everything Republicans do to the point where any victory they have is a precursor to mass amounts of death.

The members of the Congressional Black Caucus (the name itself is another facet of the left’s identity politics) were happy to go along with Pelosi’s racialism when it involved attacking Republicans. They’re simply angry that like Pelosi before here, AOC is now attacking someone to her right — who happens to have a (D) after her name.

And it gets better: “Apparently, an unnamed senior Dem aide is texting around a photo of a Goomba puppet from the video game Mario Bros. to slam Rep. Alexandria Ocasio-Cortez as a ‘puppet’ of ‘elitist white liberals:’”

Not surprisingly, Trump has joined in the fun as well: “Trump: Pelosi’s not a racist and AOC is being ‘very disrespectful’ to her.” “Good luck to House Dems in trying to figure out whom they should side with now that the most hated Republican in the country has joined Team Nancy.”

House Democrats Nuke AOC’s Chief-Of-Staff On Twitter, Meltdown Ensues. Saikat Chakrabarti, “who seems to have a soft spot for followers of Adolf Hitler, has been under intense fire from Democrats in recent days as a senior Democratic aide recently told The Washington Post that top Democratic lawmakers want him fired. Chakrabarti admitted in a recent interview to The Washington Post that Ocasio-Cortez’s far-left $93 trillion “Green New Deal” was about implementing socialism in the United States.” 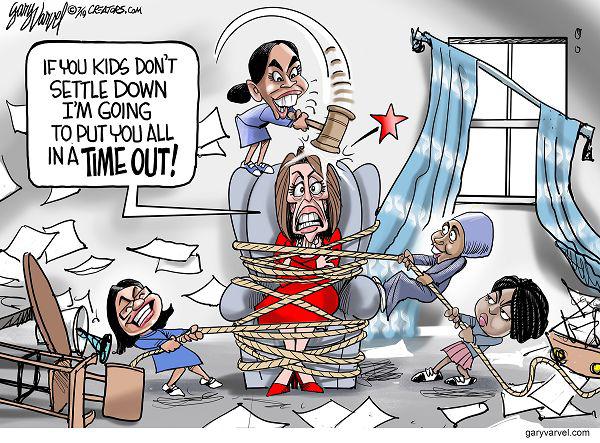 Homan noted that, while he did not write the policy, he had made “numerous recommendations” to Homeland Security, including implementing a “zero tolerance” policy for illegal border crossers.

“The same as it is with every U.S. citizen,” Homan shot back. “Parent [who] gets arrested with a child.”

After a brief pause, a seemingly rattled Ocasio-Cortez said, “Zero tolerance was interpreted as the policy that separated the children from their parents.”

“If I get arrested for DUI and I have a young child in the car I’m gonna be separated,” Homan said. “When I was a police officer in New York and I arrested a father for domestic violence, I separated that father from his family.”

“Mr. Homan, with all due respect, legal asylees are not charged with any crime,” said the congresswoman.

But Homan was ready, with a specific U.S. code no less: “When you’re in this country illegally, it’s violation 8, United States Code 1325.”

Related: Fireworks: Everyone needs to watch this clip of Homan unloading on Dem Rep. García.