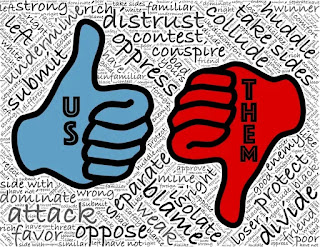 Much has been written about President Joe Biden’s new Domestic Terror law, but nothing I have seen until now shows just how horrifying it is.

To say that the White House uses the Department of Homeland Security (DHS) like political puppets to push their own agenda would be an understatement. The New Yorker chronicled four DHS secretary’s who were forced to resign by October 2019,  and a fifth who resigned this January .

So when I heard about DHS counterterrorism chief John Cohen having a hard time containing his enthusiasm over Biden’s new domestic terrorism law in a GW Program on Extremism webinar I knew it couldn’t be good.

Garcia does a great job of framing the Feds justification for creating a new War On Terror by targeting American citizens.

As America closes in on the 11th anniversary of 9/11, the Feds want the public to believe that unknown terrorist organizations are recruiting your neighbor[s] to become a domestic extremist. But it is not just any neighbor, this time it is far-right “extremists” or White supremacists and Trump supporters who they want to recruit.

For years DHS officials have warned Americans of the dangers that lurk just outside their front doors or worse in the far-flung Middle East where extremists are plotting to bomb us, shoot us, or poison our water systems. The only difference to the terrors that await Americans is that now they are allegedly targeting a person’s ideological beliefs.

What does this mean for Americans?

It means that the Feds can target individual’s for expressing anti-government sentiments.

“In many respects, this is a much more individualized threat, and what I mean by that is if you look at the lethal attacks that have occurred in the U.S. over the last several years, they have been conducted by individuals who spend incredible amounts of time online viewing extremist content, content about past violent attacks, they tend to be individuals who have shared behavioral health or environmental characteristics,” Cohen said.

Targeting people for their ideological beliefs is horrifying in and of itself. Biden’s new domestic terror law will also give law enforcement the right to target people based on their behaviors.

“What we mean by that, yes, the motive and ideological beliefs are important as part of the analytic process, but the threat tends to come from individuals who have a very superficial understanding of the ideological belief system they use as the validation for an act of violence, but they do have shared behavioral characteristics,” Cohen said.

See also  Steve Bannon: "50% Of Americans Don't Have $500 In The Bank... How Many Generations Have Your Family Been Here?"

As a recent Brietbart article pointed out, there is no “official Pentagon definition of extremism.” So how can our government give more powers to law enforcement to surveil and arrest suspected “domestic extremists”?

Mike Berry, the general counsel for First Liberty Institute, said he asked the Counter-Extremism Working Group (CEWG) how it intended to define “extremism” and the answer he got was something to the effect of: “We’re still working on that, we’ll probably take the existing definition and expand it.” Berry said that response was “problematic.”

When an organization that backed President Trump warns people about Biden’s new domestic terror law, it is time for all of us to take notice.

Berry warned, “I just don’t know how you can reconcile the Constitution with trying to criminalize someone’s thoughts and beliefs.” And that is the crux of the problem.

When DHS counterterrorism chief Cohen goes on record saying, “There have been several cases where individuals have not met the threshold for domestic terror yet they eventually go out and commit an act of violence”, they are admitting that this is another scam that the mass media is only too happy to perpetuate.

When the Feds and the mass media started asking American’s to “enhance domestic terrorism reporting” by reporting family members and co-workers, you know law enforcement has become a mirror image of other authoritarian regimes.

“Our goal is to enhance domestic terrorism analysis and improve information sharing throughout law enforcement at the federal, state, local, Tribal, and territorial level, and where appropriate with private sector partners.”

“This involves creating contexts in which those who are family members or friends or co-workers know that there are pathways and avenues to raise concerns and seek help for those who they have perceived to be radicalizing and potentially radicalizing towards violence,” the White House official said.

Imagine if I used the same logic that the Feds and law enforcement use. It could go something like this:

See also  BIDENFLATION: Americans are “feeling the pinch” as prices skyrocket and families are forced to cut back: Eggs up 40%, Milk up 17%, Bread up 16%

One day, I looked outside my window and saw my neighbor talking to a Black man and then I saw them talking to what appeared to be a Muslim but I couldn’t see the person’s face because it was covered with a hijab. Then I saw my neighbor putting anti-government and Black Lives Matter signs in their front yard; they even put up a Pride flag.  The next day, my neighbor knocked on my front door asking me to sign a police reform petition. Little did I know that my wife and kids had already signed the petition.

The next day when I went to work, I overheard my co-workers saying that they planned to march in a Black Lives Matter protest and asked me to sign a police brutality petition.

So when I got off work I immediately called DHS’s new, “Be On The Lookout For Domestic Terrorists” hotline and filed  reports on my neighbors, my family and co-workers, I even called my local police department and filed reports with the local Fusion Center. I did this to protect my Homeland, because you never really know about a person’s ideological beliefs and behaviors. (FYI, there is no domestic terrorists hotline, yet.)

When did freedom of expression become a tool for law enforcement to use to identify family members, friends, neighbors and co-workers as potential extremists?

Giving law enforcement more powers to target people based on made-up or junk science and unsound definitions of domestic terrorism has all the earmarks of an ever-expanding police state that began 11 years ago.