That economic, social and political conflict is accelerating is self-evident.What’s open to debate are the core drivers of conflict / disorder /unraveling.

Here’s the core self-reinforcing dynamic in my view:

1. The status quo elites can no longer mask soaring costs of essentials nor soaring wealth / income inequality between the top .01% (Oligarchs), the top 9.99% who enrich the Oligarchs with their discretionary spending and technocratic/managerial labor, and the bottom 90% who are rapidly losing ground on all fronts: economic, social and political.

2. The elites’ “fixes” to the social / political conflicts unleashed by the rigged financial system and winner take most economic order are politically expedient, meaning they don’t actually address the sources of conflict, they merely paper them over with PR as a means of preserving the elites’ wealth and power.

3. The elites’ fundamental financial “fix” is to create trillions in newly issued currency and distribute it to the banks, financiers, super-wealthy families and global corporations– the top .01% Oligarchs.

4. This “fix” accelerates the asymmetric distribution of wealth by enabling the already-wealthy to buy more productive assets, fund stock buybacks, etc., while forcing the bottom 90% to borrow money from the Oligarchs to make ends meet: the rich get richer, the poor get more indebted.

5. The only possible output of these inputs (political expediency to preserve the elites’ wealth and power, the creation and distribution to the Oligarch class of trillions in new currency) is the acceleration of the very erosion that fueled social / political conflicts in the first place. In effect, the elites’ “fixes” are accelerating the conflicts that will ultimately lead to their downfall.

This is why the unraveling cannot be reversed or stopped: all the enormous efforts being expended by the elites to maintain the status quo exactly as it is now, with the vast majority of wealth and power in their hands, preclude the structural changes needed to re-set the status quo onto a more sustainable (i.e. more transparent, productive, efficient and decentralized) and less rigged-to-benefit-the-few path.

All the status quo “fixes” only hasten the collapse of the status quo. My longtime colleague Gordon T. Long has laid out the stages of this inevitable descent into conflict and collapse in a series of charts which we discuss in our latest video conversation Coming Era of Political & Social Conflict (29:13).

These stages are predictable because human nature is predictable. That elites will follow a pathway of expediency to preserve their wealth and power is predictable, and this pathway includes the debauchment of currency (printing ever greater sums to add to their wealth and placate the masses), the substitution of credit for capital, the political disenfranchisement of the masses, increasingly oppressive financial repression and social / political conflicts that spiral out of control as the inherently unstable financial house of cards collapses. 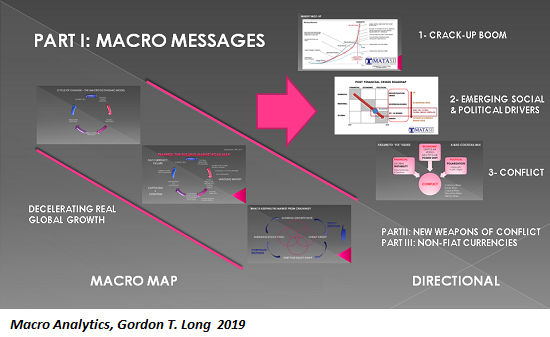 Since the elites won’t allow an orderly re-set that reduces their wealth and power, the re-set will result from spiraling conflicts and the collapse of all that is viewed as permanent, i.e. the financial and political status quo.

Don’t think it won’t happen just because it hasn’t happened yet.