We all have genetic variations.  In particular, different enzymes and proteins in our bodies have slightly varying configurations and many of these are more heavily or lightly expressed depending on your race.

These variants can be quite useful for predicting certain disease outcomes, or tracing genetic routes.  In fact, when you do a “23andme” test that comes back and says you are 13% Irish (or something) this is exactly what they are testing for; known unique genetic variations that have clustered within a region or race or both.

In this case, we’re looking at a table of populations listed by the amount of ACE2 expressing cells (across the six genetic variants listed): 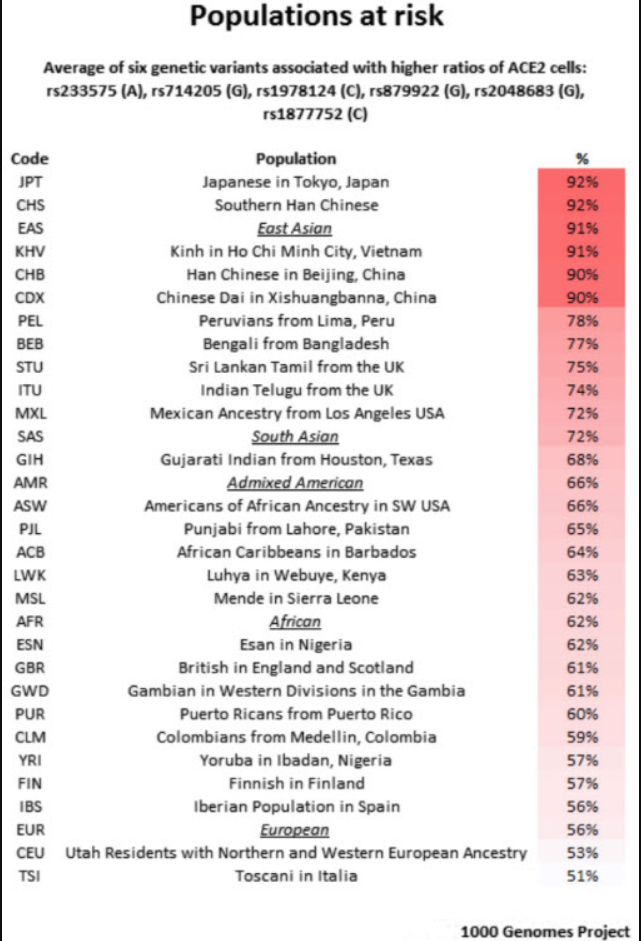 In the study I referenced in one of the earliest videos on all this a while back, they experimentally determined this: (from a relatively small set of samples, mind you):

We also noticed that the only Asian donor (male) has a much higher ACE2-expressing cell ratio than white and African American donors (2.50% vs. 0.47% of all cells). This might explain the observation that the new Coronavirus pandemic and previous SARS-Cov pandemic are concentrated in the Asian area.

At any rate, note that the highest concentration is in Japanese … presumably Japanese males.  Consider also that Japan is a very aged population.

That suddenly makes me wonder about this particular suicide:

Saitama, Japan -A government official involved in work to look after isolated returnees from Wuhan at a lodging facility near Tokyo was found dead on Saturday and police are investigating his death as a possible suicide.

The 37-year-old man dispatched from the Metropolitan Police Department to the Cabinet Secretariat was found collapsed around 10 a.m. near the dormitory building of the National Institute of Public Health in Saitama Prefecture where some of the people brought back from the central Chinese city are currently staying.

This caught my attention when it came out, but I didn’t quite know what to make of it.  But what if this poor person was in charge of overseeing a R0 4.1 virus that attacks his race particularly hard?

I cannot imagine anything more devastating the potentially feeling somehow responsible for allowing such a  thing to escape into my country.  If that’s what happened.  Just speculating, but it’s one of those odd news stories that bears noticing.