The pound plunged against the euro, the dollar, gold and all leading currencies today as Theresa May’s UK government appeared vulnerable to collapsing and political turmoil risked creating a hard Brexit. 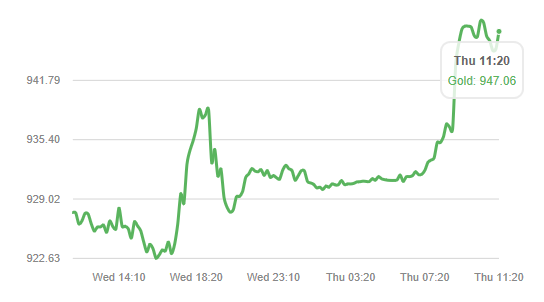 The pound has fallen 2.6% against gold in less than twenty four hours seeing gold rise from £923 to £947 per ounce in sterling terms.

The pound slumped the most in more than 17 months as several U.K. ministers resigned less than 24 hours after Prime Minister Theresa May said she had won cabinet approval for a deal with the European Union.

Brexit Secretary Dominic Raab handed in his resignation to Theresa May over the controversial Brexit proposal.

Mr Raab said he could not support the Prime Minister’s withdrawal agreement from the European Union. He wrote: “It has been an honour to serve in your government as Justice Minister, Housing Minister and Brexit Secretary. I regret to say that following the Cabinet meeting yesterday on the Brexit deal I must resign.”

Financial analysts are concerned about the more ‘extreme’ outcomes to Brexit talks and that potential worst case Brexit risks may now come about.

See also  The Great Reset is Here: Federal Government at War With Farmers

This makes the pound vulnerable to further falls into year end and in 2019. Longer term, the pound is likely to weaken further as Brexit uncertainty and fallout impacts the slowing UK high street, prperty market and wider economy.

Gold’s record nominal high in sterling terms over £1,120 per ounce looks like being surpassed in 2019 with gold prices just 20% below that now.