Last December, the Ukraine power grid was attacked, and Russia is the suspect. A quarter of a million people lost power in the Ivano-Frankivsk region of Ukraine.

Vasyl Pemchuk is the electric control center manager.  Remembering the nightmare when hackers took over their computers, he said all his workers could do was film it with their cell phones.

“It was illogical and chaotic,” he said. “It seemed like something in a Hollywood movie.”

This is, also, my fear, and as Hurricane Florence makes its way into the Carolinas my mind is fixated on weeks without power.  But the truth is we do not have to wait for a hurricane for this to occur, an foreign Country will most likely do that for us in the near future.

How easy an operation was it for allegedly Russia to put parts of Ukraine in the dark?  It was as easy as a click.

The alleged hackers sent emails with infected attachments to power company employees and went on to use their login credentials.  The fact is it was not difficult to do – ultimately they took control of the grid’s systems to cut the circuit breakers at nearly 60 substations.

The suspected motive for the attack is the war in eastern Ukraine, where Russian-backed separatists were fighting against Ukrainian government forces.

An attack of the same type will happen in the U.S., too – just a matter of time.

He is sending out a warning to all Americans – get ready.

Here is a fact you don’t want to know – U.S. electric utilities have weaker security than Ukraine, and the malicious software the hackers used has already been detected in the U.S.

Yes, it is already inside our system – now.  We have already been impacted by an attack from Russia on our power grid.  Most people do not realize this, but it is true..

See also  Another Brick in the Great Wall of Coolangatta

In March 2018, the Department of Homeland Security and the FBI issued a joint alert: “Russian government cyber actors” have been targeting U.S. critical infrastructure sectors, including energy, nuclear and commercial facilities, since at least March 2016.

On the very same day the U.S. imposed sanctions against 19 Russian individuals and five entities for other cyber-intrusions.  James Lewis is a cybersecurity expert and vice president of the Center for Strategic and International Studies, who said he was not surprised at all.

The United States government informed electric companies that Russia undertook a “multistage intrusion campaign,” by using common hacking techniques.  We all have heard of malware and spear-phishing, and it was that easy. We have to expect it again.

Some say we are ready, and I would like to believe that.  One aspect which is a positive one is that readiness includes operating power plants without digital controls.  This is old-fashioned, but to prevent a cyber intrusion, go back to the old ways. Experts advise utilities to go back to a less-efficient means of operating but still keeps the lights on.

Another precaution is blocking emails and other Internet traffic from outside the country.  We are learning, but most of this is common sense. At least they are practicing the old methods and relying less on computers.

The U.S. power grid is complex, due to its decentralized nature with 50 states sharing control.  However, the U.S. government is taking steps to prepare, and I think it is interesting that includes going back to the old-fashioned ways before society began to be overly dependent on computers.

Now, an update to Hurricane Florence.  Here is the latest update from NOAA for September 13, 2018. The video is the latest information available. 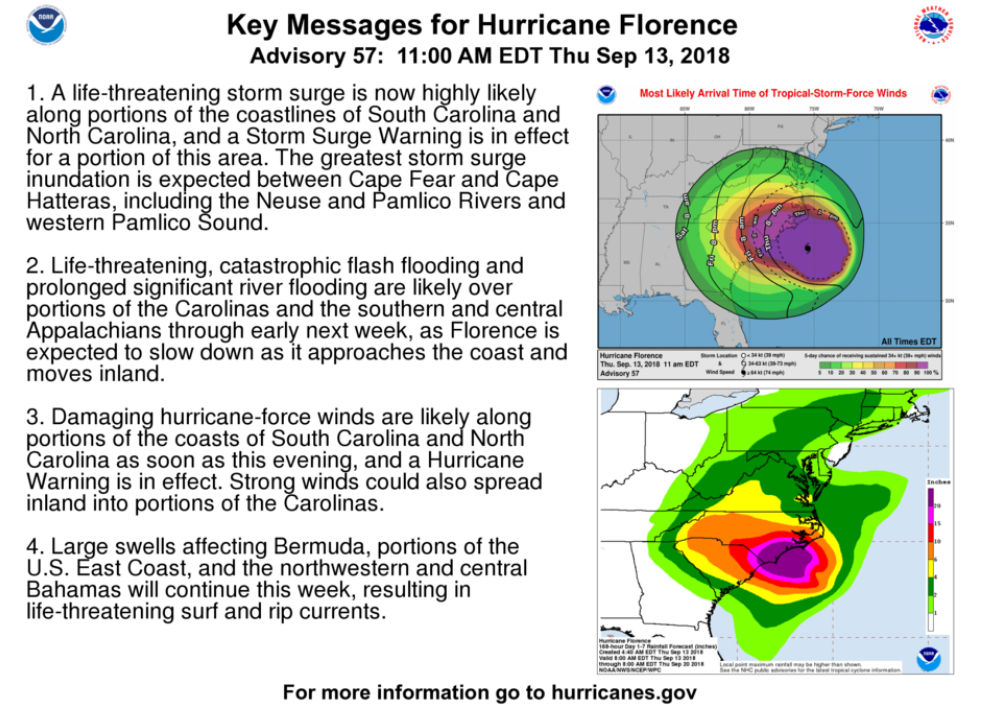 For anyone interested in QAnon, it has just been announced that the Great Awakening board on Reddit has been removed and banned.  The official reason is the online platform said that the subreddit posted content harassed people and incited violence.

Reddit took down a subreddit that served as the primary platform for the promotion of the QAnon elites.

On Wednesday Reddit shut down the GreatAwakening QAnon Board.  I have never followed the “plan,” so I am going by what is in the news.  Before the Board was closed, it had more than 54,000 followers. At least six other Q subreddits were also banned.

In my opinion, the Q ‘thing’ was a money-making machine used by some ‘truthers’ on YouTube.  It is so sad to see the division it has caused among that community. You have the side, who follows the ‘crumbs’ Q drops; then, you have the side exposing the whole money-making scheme.

The whole community is now divided, and some big names have been implicated in the plot strategized from the very beginning to make money basically by lying to the ‘Patriots.’  It is a pathetic below-the-belt scheme founded by some of the biggest YouTubers – so sad. I used to admire and follow some of them, and this has been a huge shock and wake-up call for me.  But you should never follow any ‘plan’ in life but your own or of someone you trust.

I am sure this will shake the QAnon group to its foundation, but I have no doubt it will survive.  They will never let it go, as too many bucks are being made off of the followers. Those followers believe in the reality of QAnon, and I feel it is similar to a cult.  I pray that those who are using those gullible people to take pity upon them and reveal the truth, but that will never happen.

Take care every one, and give it all to God.