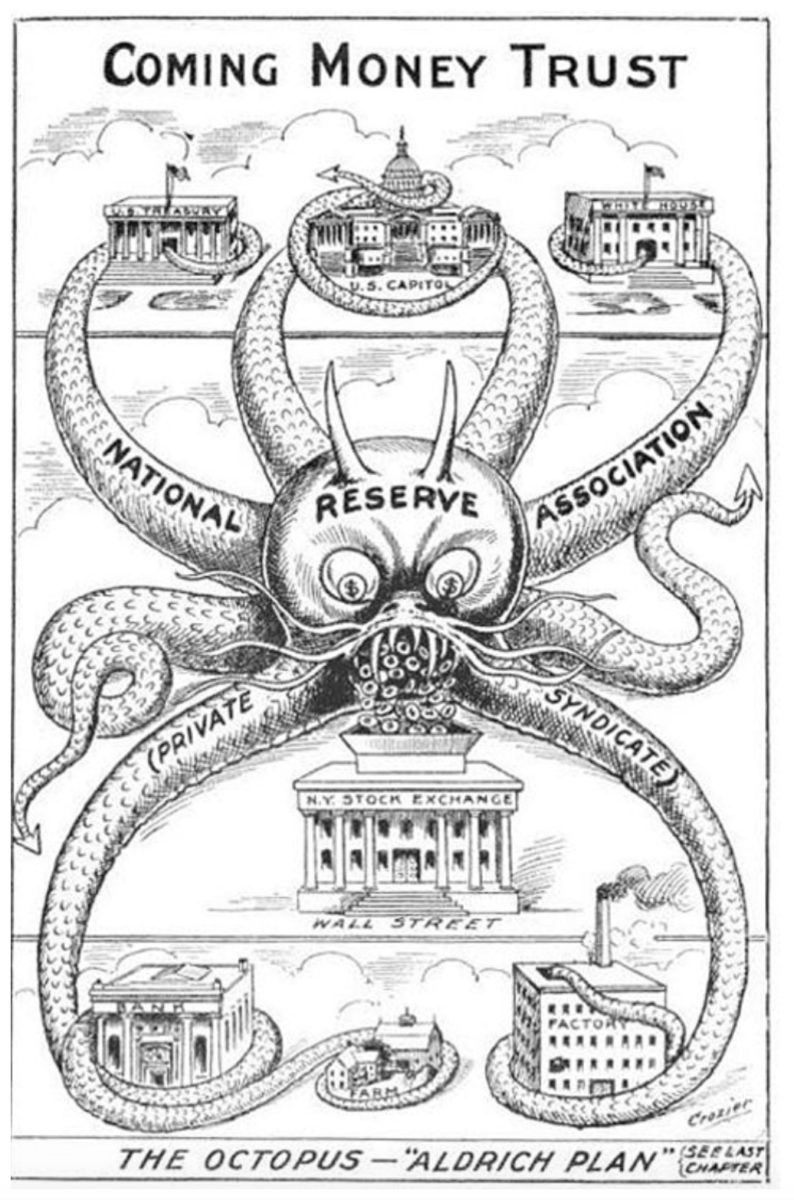 One of the most famous, and prescient, financial cartoons in American history is the above depiction of the Federal Reserve Bank as a giant octopus that would come to parasitically suck the life out of all U.S. institutions as well as free markets.

The image is taken from Alfred Owen Crozier’s U.S. Money Vs Corporation Currency, “Aldrich Plan,” Wall Street Confessions! Great Bank Combine, published in 1912, just a year before the creation of the Federal Reserve.

Last night, the current high priest of money printing, asset bubbles and inequality, Jerome Powell, appeared on 60 Minutes. Interviewer Scott Pelley mentioned the fact that such discussions are rare and noted the last time a Fed head appeared for such a chat was Ben Bernanke back in 2010.

As such, what I find most interesting about this event wasn’t Powell’s boilerplate, bureaucratic propaganda about how the economy’s doing fine and how much central bankers love average Americans, but why he and the institution he heads felt a need to do this now.

There’s no doubt something has the Fed spooked otherwise Powell never would have done this. One factor is they know the economic ground’s starting to shift beneath them, and they need to push a particular narrative ahead of time so central bankers can once again do as they please when “the time to act” arrives.

This is why Powell pushed the blame on the current economic slowdown on China and Europe. The Fed is no different than your average politician. It takes full credit when things go well, but endlessly deflects and blames outside forces when things fall apart.

You get the point. If central bankers accept blame, or admit they got anything over the past decade terribly wrong, then they can’t justify doing more of the same and worse in the future. And that’s exactly what they plan to do, by the way.

Which brings me to the purpose of this piece. The reason I’ve started writing about such topics again after a multi-year hiatus is because the chickens are finally coming home to roost. The recent global slowdown and concurrent central banker panic is proof we’ve arrived at a very important inflection point. The central bankers hope they can prolong this already historic and obscene financial asset bubble a little longer via manipulation and propaganda, but they also understand it may be the end of the road for this cycle.

As such, every person in the world needs to understand what the Fed and other central banks did during the last crisis, and what they plan on doing the next time around (more of the same and worse). If you judge an economy based on stock market performance and aggregate GDP, you might think the Fed did a great job over the past decade, but if you judge it based how we’ve turned an entire generation of young people into debt slaves, arrived at levels of inequality unseen since just before the Great Depression and catalyzed an explosion of populist politics throughout the western world, you might be ready to grab a pitchfork.

What central banks have achieved over the past decade is a surreptitious transfer of risk and cost away from elites and onto the general public. They sent benchmark interest rates down to zero, but only the corporate and financial class really benefits from such distortions. They’re the ones who bought up all the foreclosed upon real estate (hello Blackstone) only to rent it right back to those who were evicted. They’re the ones who can issue debt on the cheap to buyback shares in order to dump their personal holdings to their own corporations. At the same time, credit card interest rates for the average person are at record highs of 17.64%. So who really benefits from the Fed’s record low rates?

Powell: Not everyone is experiencing this widespread prosperity we have.

No contradiction there or anything.

What I also think has the Fed spooked is the fact the public is slowly but surely catching on to its scam. The increased popularity of MMT in the public conversation is proof of this. People are starting to wonder why the central bank can print money and buy assets to save the portfolios of baby boomers, yet the public can’t simply print money for stuff like healthcare, education and roads. The Fed intentionally obfuscates what it does (money printing) with terms like “quantitative easing,” but people are starting to get the joke.  The Fed doesn’t want people thinking about such things.

Another sign that non-financial types are starting to pay more attention to such topics was made clear when I saw Michael Hudson interviewed on the Jimmy Dore show. If you haven’t seen it, take a watch.

The monetary system is slowly being exposed for the scam that it is. It’s merely an opaque and unaccountable mechanism to bail-out and entrench the wealthiest and most powerful segments of society at the expense of the general public. This is one reason the Fed is currently panicking and so desperate to craft and promulgate an alternative narrative.

The Fed will try to do what it did ten years ago (and then some) the next time the economy craters. They already transferred trillions from future generations and society at large to financial industry elites once in the past decade. Will we let them do it again?

Liberty Blitzkrieg is now 100% ad free. As such, there’s no monetization for this site other than reader support. To make this a successful, sustainable thing I ask you to consider the following options.

You can become a Patron.

You can visit the Support Page to donate via PayPal, Bitcoin or send cash/check in the mail.