NewsGuard, which is the establishment media’s latest effort to blacklist alternative media sites, is giving its sign of approval to proven hoaxes, even to stories that have been retracted.

This story is personal for me, let me tell you why. Back on January 6th of this year, I was contacted by a woman named Jennie Kamin who said she was from a company called NewsGuard. She wrote to me and said  “I am doing a site review of NowTheEndBegins.com for NewsGuard a news rating agency, and just had a few requests for comment. I appreciate your help in meeting my Tuesday deadline.”

“The prophets prophesy falsely, and the priests bear rule by their means; and my people love to have it so: and what will ye do in the end thereof?” Jeremiah 5:31 (KJV)

As it turns out, her “few requests” for comments were no fewer than 9 different questions and statements, all of which accused me of writing false news, fake news, misleading news and stated that I used “sensational headlines” in my articles. On that last count, guilty as charged. But on the others, well…not a chance. One of the things she seemed to get stuck on was that NTEB “does not appear to disclose its conservative-leaning to readers“. Really, Jennie?

You have to go to college to get “so smart” that you can come to a site like Now The End Begins, a site loaded to overflowing with thousands of articles and stories that stand for God, the Bible, Jesus Christ, promotes Conservative values, stands against the Progressive Liberals, and then come away asking why we don’t “disclose our conservative leanings” to our readers. Kind of like saying that signs should be posted at all beaches stating that “caution, ocean water may be wet today, and salty, too“.

Ms Kamin’s bio on NewsGuard lists her as a producer for CBS News, a graduate from Tulane with a Masters Degree from the Columbia University Graduate School of Journalism. Lastly, it says that in 2008, Jennie was a Hillary Clinton delegate at the Texas State Democratic Convention. As Paul Harvey would say, now we know the ‘rest of the story’. Looks to me like someone is trying to set the table for another run in 2020, and wants to start by silencing the alternative media like NTEB.

Gee, I wonder how NewsGuard will rate this story, lol. And do you think that Jennie Kamin, with her Masters degree in journalism, knows that Now The End Begins is already listed as an official ‘hate group’ by the race baiters over at the Southern Poverty Law Center? Lions and tigers and bears…oh, my! Excuse my while I run to my ‘safe space‘ to cool down a little.

Please enjoy this article from our friends over at Breitbart News, as they show you in no uncertain terms that NewsGuard is nothing more than a Liberal smoke and mirrors machine, funded by Far-Left Progressives, who want to control the news that reaches your inbox. As you will see below, they are nothing but big, fat, fake news liars.

Microsoft is so desperate to spread fake news and blacklist ideas it doesn’t like, NewsGuard is automatically included in one of its browsers. You will find more examples below, but here is NewsGuard’s seal of approval (on the Google search page) for Rolling Stone’s 2014 hoax about a gang rape at the University of Virginia (UVA).

Rolling Stone which NewsGuard gave a passing grade, was eventually forced to retract the story and settle some lawsuits, but the far-left HuffPost’s aggregation of Rolling Stone’s proven lie is still live, and that green checkmark is NewsGuard’s way of telling readers they are reading something credible:

Compare that to NewsGuard’s labeling as fake news a basic news story like this one:

Why is NewsGuard labeling that fake news? Simply because Breitbart News published it. We didn’t even write that story. The AP did. We are simply aggregating the AP…

Look at the roundup below, which took less than 20 minutes to track down. Every single one of these stories is fake news, starting with BuzzFeed’s debunked lie about President Trump telling his then-personal attorney, Michael Cohen, to lie to Congress.

Look at how NewsGuard and Microsoft openly and audaciously deceive their readers: 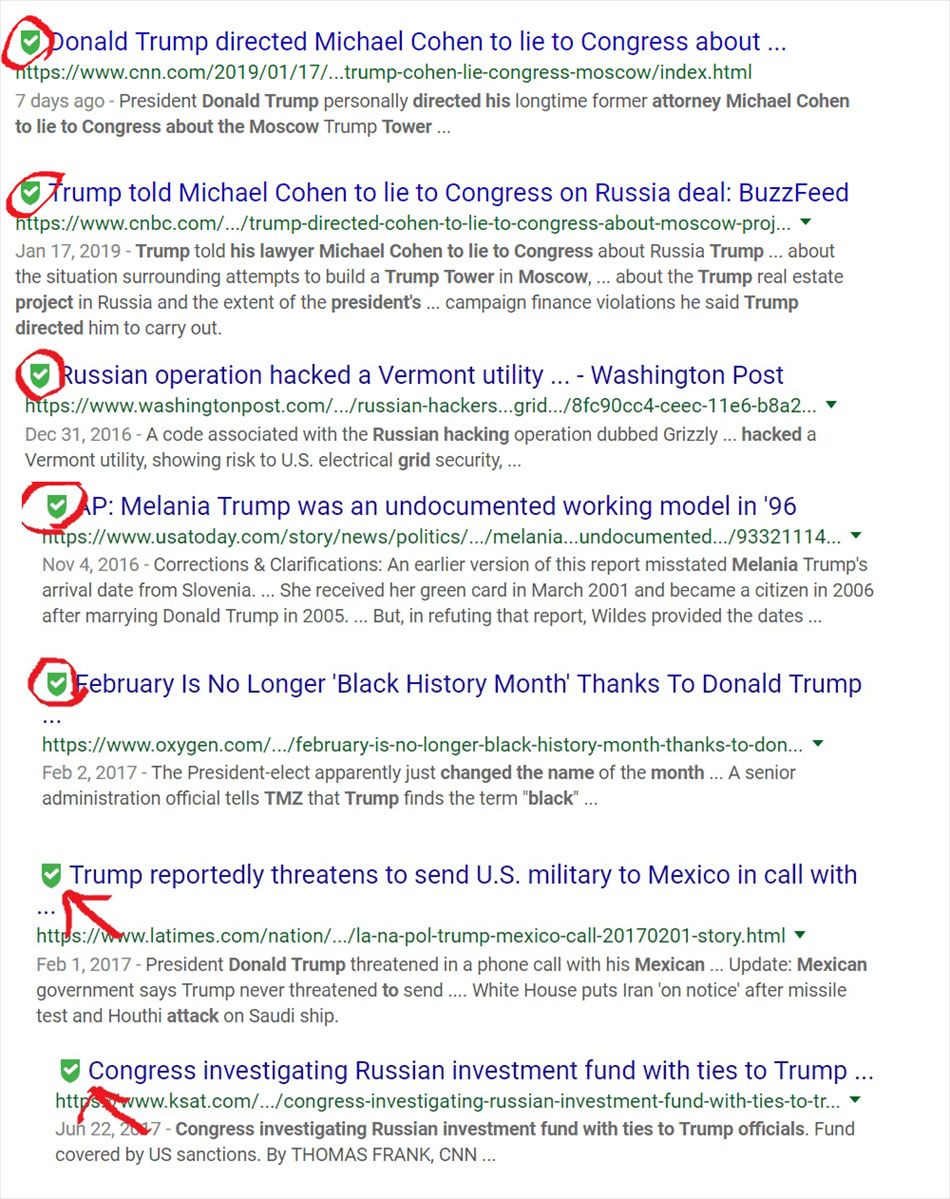 So why are NewsGuard and Microsoft deliberately marking fake news as credible? Why are they looking to fool people into believing proven hoaxes are legitimate stories — even outrageous ones about the first lady coming to the country illegally?

As I pointed out last week, NewsGuard marks as fake every single story Breitbart News publishes — not because the story is inaccurate, but because we report stories NewsGuard does not believe should be reported.

Nowhere in NewsGuard’s lengthy attack on us will you find a single example of a story Breitbart News got wrong. Nowhere can NewsGuard point to an example where our readers were misled.

You can see for yourself.

So we are not placed on NewsGuard’s blacklist for being inaccurate, for being deceptive, for not being careful. No, we are being blacklisted for uncovering and reporting things NewsGuard does not want uncovered and reported.

So what we have here is a fascist group of blacklisters looking to dupe as many people as possible into believing UVA has a rape problem, Melania Trump was an illegal alien, the Russians hacked into our electric grid, Trump told his attorney to lie, and so on…

In a 50/50 country, NewsGuard and Microsoft are obviously hoping to tip the election by fooling enough people into believing up is down and black is white.

There is no other explanation for Microsoft and NewsGuard deliberately marking proven fake news as “credible” and legitimate news as fake.