And the first person to speak once they took the city hall was a communist!

Councilmember Sawant has a key to City Hall, allowing protesters to enter and chant for the mayor’s removal. #seattleprotest pic.twitter.com/EyC7GdT4Xh

These are no longer just “radicals”. This is the whole f**king Democrat party. And they’re taking no prisoners.

They’re preparing to take the country. Coronavirus was a dress rehearsal. They already control the major cities in every state, red or blue. And they’ve used Mr. Floyd’s “murder” to unleash the violence of their army–Antifa & BLM–& other dissidants. They control the transportation systems.

These Democrat cities are going to let violence take over government
& not ask for federal help. Thereby forcing the federal government to intervene.

THEY DON’T WANT TO ABOLISH THE POLICE. THEY WANT TO REPLACE THEM WITH STATE-SANCTIONED MOB VIOLENCE: New Video Exposes the Armed Antifa ‘Militia’ Who Want to Abolish the Police.

Pretty scary. We are in the middle of a war for the soul of our country.

EXCLUSIVE: Donations, Including International Funding, to BlackLivesMatter.com Go Directly to the DNC – This Is Money Laundering

So we know for sure that BLM is a “global” / “international” network because they admit this.

When you research the expenditures of ActBlue, all of their contributions are directly going to top DNC campaigns:

Act Blue is not a charity.
It appears more accurately to be an illegal funding arm of the DNC.
(Do all the individuals around the world know that when they donate to Black Lives Matter, they are really donating to the Democrat Party?)
It is against the law to funnel international money into US elections.
It is a violation of campaign contribution laws and is not legal.
This is just another corrupt wing of the Democrat Party.

Gun sales were trending downwards since 2016, until the pandemic and riots…how convenient. 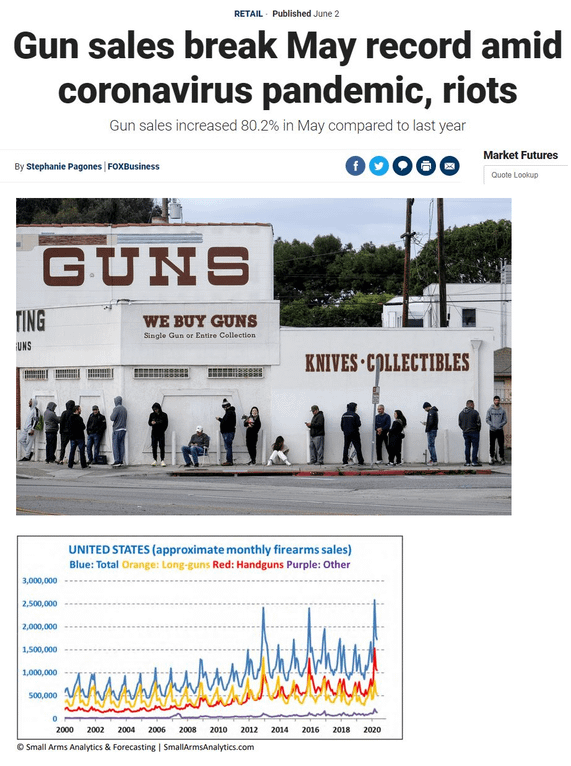 Gun sales showed a slow decline until it got a stimulus with the pandemic and national protests. It’s almost as if these events were orchestrated to create panic and fear. That seems to work well for justifying losing civil liberties and driving up gun sales.