“While most of the political world focused its attention elsewhere, special prosecutor John Durham’s team quietly reached out this summer to a lawyer representing European academic Joseph Mifsud, one of the earliest and most mysterious figures in the now closed Russia-collusion case.”

‘Twas Misfud who contacted Trump advisor Papadapoulos saying he had “dirt” on HRC.

Mifsud is the academic that reached out to Trump campaign advisor George Papadapoulos in early 2016 in London. Mifsud made a claim to Papadapoulos about the Russian government having ‘dirt’ on Hillary Clinton that they were willing to share with the Trump campaign. When details of this conversation between Mifsud and Papadopoulos was brought to the attention of the FBI more than two months later, it directly led to the agency  launching its “Crossfire Hurricane” counterintelligence investigation of the Trump campaign on July 31, 2016.

The FBI investigation into Trump’s Campaign started with Professor Misfud.

So there’s no doubt whatsoever about Mifsud’s central role in launching what became the Crossfire Hurricane investigation run by former FBI Deputy Director … and later morphed into the Mueller Special Counsel probe.

According to the Trump/Russia collusion narrative, [Mifsud is] the only real bona fide Russian agent involved in any part [of the Russian Collusion story]. 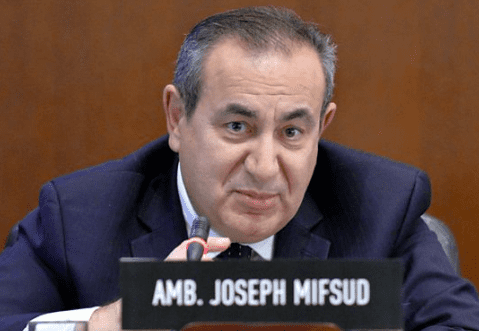 Now, the deposition of Joseph Mifsud has been completed and tapes have been given to US Attorney John Durham and the Senate Judiciary Committee.

From the Epoch Times

[Reporter John] Solomon [of The Hill] is reporting that an audiotape containing professor Joseph Mifsud’s deposition has been given to both U.S. Attorney John Durham’s investigators and to the Senate Judiciary Committee.

“I can report absolutely that the Durham investigators have now obtained an audiotape deposition of Joseph Mifsud, where he describes his work, why he targeted George Papadopoulos, who directed him to do that, what directions he was given, and why he set that entire process of introducing Papadopoulos to Russia in motion in March of 2016, which is really the flashpoint the starting point of this whole Russia collusion narrative,” Solomon told Fox News’ Sean Hannity.

“I can also confirm that the Senate Judiciary Committee has also obtained the same deposition,” he said.

There is a suspicion that Mifsud was working as an FBI asset.  [These deposition tapes will validate or invalidate this suspicion.]

If this turns out to be true, it was an FBI operation that lured Papadopoulos to meet an FBI asset pretending to be a Russian that justified the FBI to launch its Russian Collusion investigation.

You cannot save the Russia-Gate narrative if there were no real Russians in the story.

Political commentator Brian Cates believes that others know of the Mifsud deposition but are NOT PURSUING IT or REPORTING ON IT as it does not support the Russian Collusion narrative and reveals it to be a hoax.