But, but, but, there’s no inflation I’ve been told by Federal Reserve douchebags. 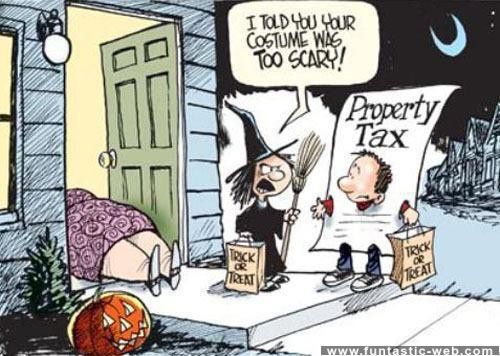 In 2018, property taxes on the nation’s 87 million U.S. single-family homes rose 4 percent to $293.4 billion, reaching an average of $3,498 per home, according to a new report from ATTOM Data Solutions, which runs a property database.

Property taxes have been a hot-button issue of late because of a $10,000 cap on deducting state and local taxes that was imposed as part of the Republican-led tax overhaul. Some homeowners in high-tax states have said the so-called SALT deduction cap means they owe the IRS this year, instead of getting refunds they received in previous years.

The SALT deduction cap “is putting this question back in people’s minds,” said Todd Teta, chief product officer at ATTOM. “Any state or local tax initiative has been heightened in people’s minds over the last two years, given it was in the news.”

See also  Rising Costs At The Grocery? Legacy Media Would Have You To Believe There’s Nothing To Be Done But There’s One Simple Solution

There are indications property tax increases may be slowing in high-tax areas, Teta said. The difference between high-tax states and low-tax states has narrowed, resulting in a smaller gap between the states than in previous years, he added.

Coastal states with big metropolitan areas, such as New York and California, are among those with the highest property taxes, while Southern states had the lowest rates. The state with the lowest average property tax in 2018 was Alabama, at $788 per home.

U.S. states with the highest property taxes in 2018: