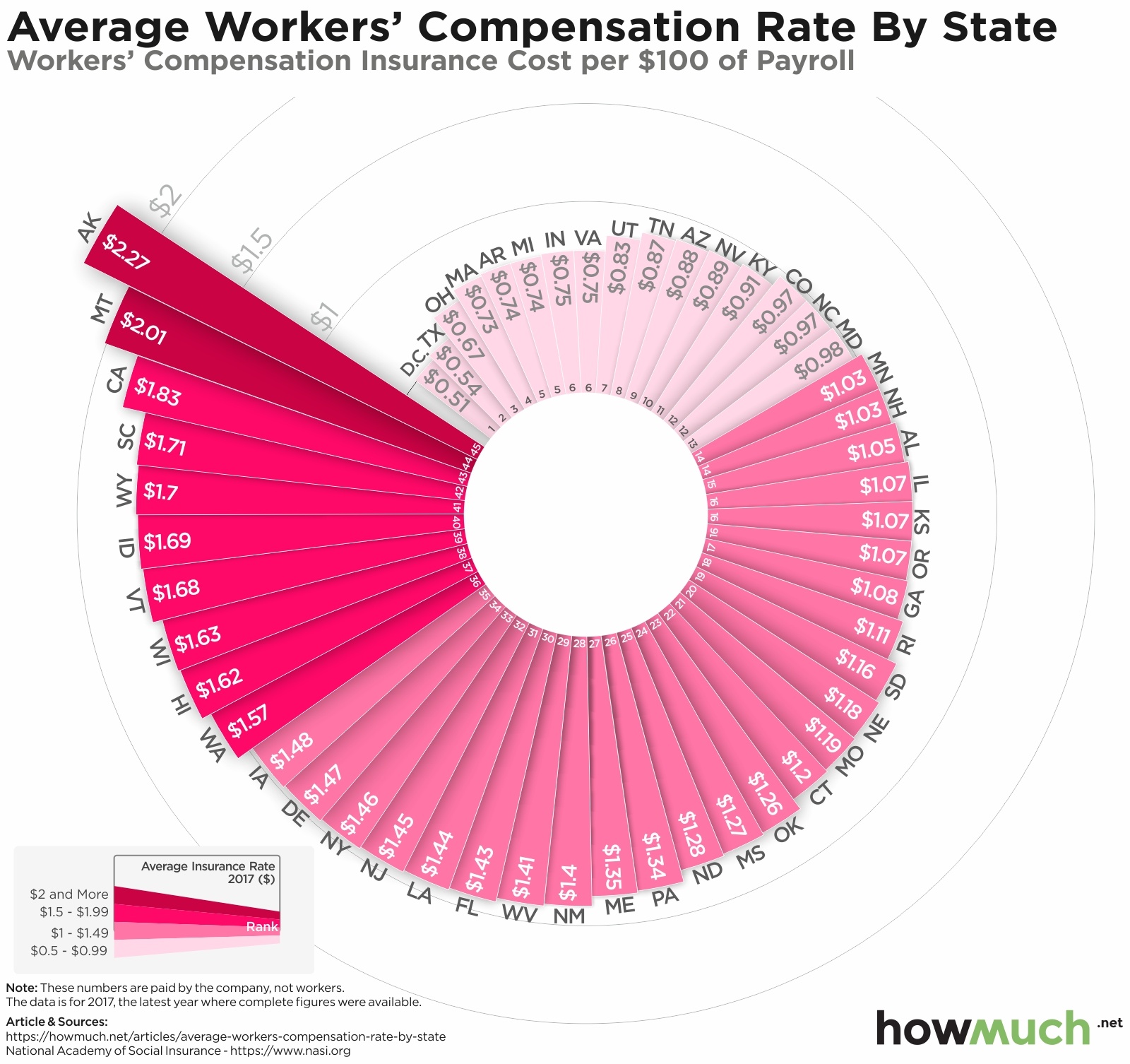 We got the data for our visual from the National Academy of Social Insurance (NASI) for 2017, the latest year where complete figures were available. Proper credit to Fit Small Business for writing an original article bringing it to our attention. We broke the numbers down into a spiraling bar chart with a color-coded breakdown, highlighting each 50-cent increment of cost per $100 of payroll. This lets you easily see which states carry the heaviest and lightest burdens in paying workers’ compensation.

Read the full report from NASI for a detailed description of the research methodology, but there are a couple things to call out in our visual before diving into the details. Workers’ compensation is for people who are injured on the job. It’s an insurance program run by individual states covering specific types of workers. The figures from NASI take into account only employers who are legally required to offer workers’ compensation benefits. Some companies may offer benefits even without a legal requirement, but a lot of workers don’t have coverage. The researchers were also only focused on workers’ compensation through official reporting channels, meaning they don’t take into account all the ways a company might support an injured employee. And finally, workers’ compensation is organized on a state-by-state basis. There is no uniform federal requirement across the country.

Alaska clearly stands out head-and-shoulders above the rest of the states as the most expensive. It costs companies a whopping $2.27 per $100 of payroll just to cover the premiums for insurance in case someone gets injured. That’s likely thanks in large part to the predominance of heavy extraction industries in Alaska and how far away many people are from major hospitals. The only other state to cost more than two bucks is Montana, where it runs employers $2.01, likely for the same reasons as Alaska. But why is California so expensive? Part of the reason has to do with California’s laws on short-term disability due to non-work related injuries as well as leaves due to pregnancy. According to NASI, other states high in the rankings also have similar programs, including Hawaii, New York, New Jersey and Rhode Island.

At the other end of the spectrum, Texas is the second cheapest in the country at $0.54 after Washington, DC at $0.51. That’s because companies aren’t required to offer it unless they want to, which means companies offer workers’ comp as a fringe benefit especially when such insurance plans are cheap. Wyoming likewise restricts workers’ compensation only for employees who are in “extra-hazardous” occupations, likely driving up the cost of insurance and placing the state fifth on the list of most expensive at $1.70.