So here’s a timeline:

In this paper from 2013, Dr. Peter Daszak, Dr. Shi and colleagues isolate and characterize a SARS-like coronavirus from Chinese horseshoe bats from a cave in Yunnan province (some distance from Wuhan). They discover that, like the epidemic strain SARS-Cov-1 (but unlike other SARS-like coronaviruses), the spike protein of this isolate binds human ACE-2. They name this bat SL-CoV-WIV1 (initials seem obvious).

we report the first recorded isolation of a live SL-CoV (bat SL-CoV-WIV1) from bat faecal samples …which has typical coronavirus morphology … and uses ACE2 from humans, civets and Chinese horseshoe bats for cell entry…Our results provide the strongest evidence to date that Chinese horseshoe bats are natural reservoirs of SARS-CoV, and that intermediate hosts may not be necessary for direct human infection by some bat SL-CoVs.

I would note that bats were not sold in the Wuhan market and that the above bat SARS-like virus (WIV1) uses human ACE-2 receptor and needs no intermediate host.

Next is the 2015 paper cited in previous posts, in which Dr. Shi and colleagues create a chimeric SARS Cov virus with a distinct S protein and a SARS Cov genetic backbone, and show that it infects and replicates in human lung cells, causes pathology, and is recalcitrant to neutralization by antibodies because of its novel spike protein.

In 2017, after 5 years of surveillance studies in bat caves, they identify 11 more SARS-like strains from bats in Yunnan province, which differ significantly in the S gene and the ORF8 reading frame, among other sequences.

(I mention these in particular because in SARS Cov-2, the S protein is the key that unlocks the ACE-2 receptor and the ORF8 down regulates MHC expression on human T cells, which would reduce the degree to which these immune cells recognize the virus as foreign).

Much of the paper is devoted to genetic characterization, but one section is noteworthy from our standpoint:

Using the reverse genetics technique we previously developed for WIV1 [presumably the 2013 isolate], we constructed a group of infectious bacterial artificial chromosome (BAC) clones with the backbone of WIV1 and variants of S genes from 8 different bat SARSr-CoVs

So they constructed artificial chromosomes containing the genetic backbone of the bat SARS-Cov WIV1 (that they believe was the progenitor to SARS-Cov-1) but with various different spike protein genes spliced in. So 8 chimeras. (It has been asserted in the press that this technique does not leave a signature of artificial manipulation).

Two of the eight chimeras were cytotoxic to monkey cells, so evidently they obtained replicable virus via the technique of infecting with artificially reconstructed bacterial chromosomes containing the requisite viral genes.

When Vero E6 [monkey] cells were respectively infected with the two successfully rescued chimeric SARSr-CoVs, WIV1-Rs4231S and WIV1-Rs7327S, and the newly isolated Rs4874, efficient virus replication was detected in all infections.

The two engineered viruses, and an additional wild-type virus, were able to use ACE-2 receptor to infect human cells.

To assess whether the three novel SARSr-CoVs can use human ACE2 as a cellular entry receptor, we conducted virus infectivity studies using HeLa cells with or without the expression of human ACE2. All viruses replicated efficiently in the human ACE2-expressing cells.

Conclusion: I think we can conclude that many SARS-Cov viruses have been engineered in a lab, and some of the details have been published.

This group first discovered a SARS-Cov virus from bats that infects human cells directly via ACE-2, then artificially engineered this SARS Cov-1 type virus by manipulating the spike protein in multiple ways over time. Various artificial chimeras were produced that infect human cells via ACE-2, replicate efficiently in human cells, cause pathology, and in some cases resist neutralization by antibodies.

We know that in SARS Cov-2  has a SARS Cov backbone and a spike protein distinct from the SARS Cov-1; and that the S gene includes a 12-base-pair insertion for a cleavage site that makes the spike protein  effective at using ACE-2 for cell entry.  SARS Cov -2 also has differences in other sequences, such as ORF8, which these researchers found to be diverse in different bat corona viruses. Could SARS Cov-2 have come from a lab? Of course the possibility exists. Engineered SARS-Cov viruses made in Wuhan are a reality, not a hypothetical.

Just as an aside, interesting to see how far Yunnan province, site of the bat caves, is from Hubei Province where Wuhan is situated. 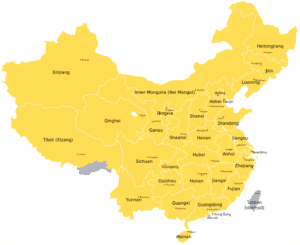