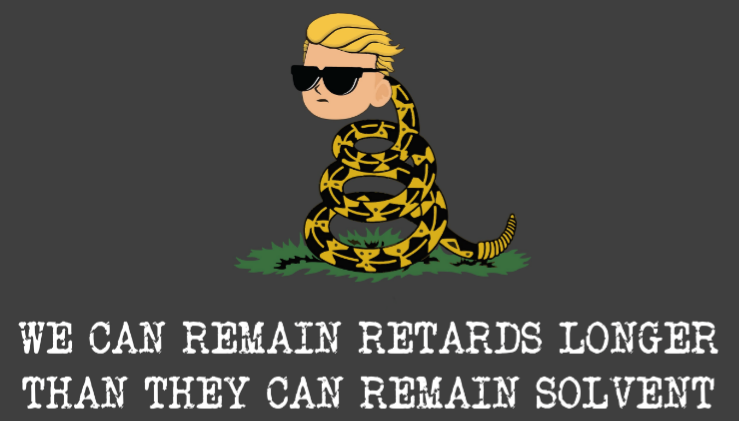 Who said there were free markets? This will end with the absolute decimation of retail trading.

I am old enough to remember the Occupy Wall Street fiasco. Thousands of people spent weeks in drum circles and they achieved absolutely nothing. Funny enough, the Occupy crowd “evolved” into antifa, and now they’re close to achieving “social worker” status in Biden’s militarized occupation government. This is not a joke by the way.

So here we are in 2021, not a month into usurper Biden’s illegitimate presidency, with Reddit of all places going full populist army and burning Wall Street to the ground.

The whole thing about the short sell squeeze is that until now, hedge fund managers on Wall Street thought that they are the only ones who can manipulate markets, and peasants are there just to give them money.

With apps like Robinhood, individual traders can now crowd-fund and manipulate the stock market at scale, just as the cabal of rich vulture-capitalists and hedge fund managers did for years.

And that’s a no-no procedure. Only the rich are allowed to manipulate markets and speculate, as the system is designed to help them make shitloads of money, not you. Here’s some good news. Well, sort of:

Short-sellers are sitting on estimated losses of $70.87 billion from their short positions in U.S. companies so far this year, data from financial data analytics firm Ortex showed on Thursday.

The hefty losses come as shares of highly-shorted GameStop jumped more than 1,000% in the past week without a clear business reason, forcing short-sellers to buy back into the stock to cover potential losses — defined as a short-squeeze — while retail investors then piled in to benefit from the surge.

Chasing shorted companies became a trend among retail traders, rippling across U.S. markets and Europe. Ortex data showed that as of Wednesday, there were loss-making short positions on more than 5,000 U.S. firms.

Its data also showed that estimated losses from shorting GameStop at $1.03 billion year-to-date, while those shorting Bed, Bath & Beyond were looking at a $600 million loss.

If you’re not up to date with the GameStop extravaganza, watch this video:

I bet they already regret allowing little people to do trades. Until now, private people were allowed into the stock market just because the ruling financial elite needed to suck up everyone’s money, just like an online casino. But now the peasants are pushing back.

However, the rich guys never lose. Even if at least one hedge fund has been probably killed by Reddit, the government will step in and bail it out. It’s socialism for the rich and naked capitalism for the poor.

You can lose all your money shorting stocks, but when God’s chosen people are in trouble, the government will surely step up to the plate and rescue them. Because that’s why we have government.

Where’s your bailout , you asked? What are you, a socialist?

The Reddit discussion group where much of the GameStop stock push has taken place, called r/WallStreetBets, was taken private, making it inaccessible to outsiders. Some longtime users also took to Twitter to say they could no longer access it. A Reddit representative confirmed that the group’s moderators took it private but gave no other comment.

In addition, the gamer-friendly platform Discord shut down a text and audio chat group also called r/WallStreetBets for “continuing to allow hateful and discriminatory content after repeated warnings,” the company said in a statement.

Discord said it has been monitoring that group — called a “server” for historical reasons — for “some time” due to repeated violations of its rules, including hate speech, glorifying violence and spreading misinformation and issued multiple warnings to its administrator.

“To be clear, we did not ban this server due to financial fraud related to GameStop or other stocks,” Discord said. “We are monitoring this situation and in the event there are allegations of illegal activities, we will cooperate with authorities as appropriate.”

This is incredibly funny to me.

However, it’s clear that ZOG will not allow this to continue. Robinhood already started manipulating the market, as in it forbid (literally blocked) its customers to buy shares for GameStop et al, allowing them to sell only.

Why did they do it? That’s an easy one:

Online broker Robinhood has raised more than $1 billion of fresh capital from existing investors, having been strained by high volumes of trading this week and raising the ire of customers, celebrities and politicians for curbing the purchase of some hot stocks.

Robinhood’s existing investors include venture capital firms Sequoia Capital and Ribbit Capital, who came together on Thursday night to offer the emergency funding, according to a New York Times report.

Reuters could not immediately verify if Sequoia and Ribbit helped with the emergency infusion.

“We’re pleased to share that we’ve raised over $1 billion from existing investors to continue to invest in record growth. This is a strong sign of confidence from investors that will help us continue to further serve our customers,” a Robinhood spokeswoman said in an email.

The firm has also tapped a credit line so that it has funds to ensure trading continuity when it lifts the rules.

The latest funding comes at a crucial time for Robinhood, which is also preparing for a high-profile initial public offering this year. Recent developments raise questions on whether the company will push forward with those plans.

This is basically bribe money. Since virtually all Redditors used Robinhood to buy GameStop stock, the hedge funds managers called up Robinhood and told them “we will give you a billion dollars if you shut this down”. Which they did.

And the government will not punish them for this. Most probably, they will punish the “insurrectionists” from Reddit.

There is a pretty good case to be made that the WSB crowd conspired to change the price of the underlying security for pure speculative reasons.

This puts trading the stocks in the gambling arena, which can actually trigger RICO charges.

It will be very hard to make a claim that a company that closed over 300 stores and lost $500 million in 2020 should be worth 6x the company’s previous all-time high 13 years ago. The fundamentals of the business to not support a massive increase in value.

The same thing can be said about Apple, Google, Facebook, Tesla, and just about every other traded company. Does a 20% increase in revenue really warrant $2 trillion in increased market cap?

Everything that’s wrong with the financial system in the US is summed up in one tweet:

Reporter: Are there any plans to recuse herself from advising the President on GameStop and Robinhood situation?

Psaki: ‘No and she’s an expert and deserves that money.’

Another good thing about the “Short Squeeze 2021” is that it has shown that the financial system is about as legitimate as the electoral system; so much about “muh free markets”, or “your vote counts”. Everything is fake, everything is rigged against you.

So, where do we go from here? Maybe this is the beginning of the end for the financial elites. A “stop” to their “game,” if you will.

But most probably, this only ends with restrictions on retail traders. There will no longer be free trading platforms. Government regulators will make sure of that.

The point of the Wall Street game is that you aren’t supposed to win. It has been this way since the beginning. The real way to screw Wall Street is to take all of your money out of the system. Never pay into a 401k, never buy stocks.

When you decide to play in the casino, trying to bankrupt them, you just end up making them more money.

If you love GameStop and have $600 to throw away, go to the store and buy $600 worth of stuff. Buying shares doesn’t make the underlying business all of a sudden do well. People buying shares over the last few days don’t care about GameStop, they were trying to buy a lottery ticket in a rigged game.

GameStop doesn’t belong above $30 and there is no fundamental that can explain Tesla being worth $800 billion. Nor can there be any explanation for $2.4 trillion Apple.

The entire system needs to go. You want the solution, ban Wall Street and close the stock markets permanently. There is no middle class because the Wall Street publicly traded corporations decimated middle class business.

Did you know that in the 1980s the average profit margin of a product sold on a store shelf was 30%. In most big box publicly traded retailers, it is now 65%.

We are living in the most fraudulent and dishonest time in history. But, I guess ethics and morals be damned.

PS: You do know that the majority of the shares are held by Wall Street and you are just making oligarchs richer by driving up shares. And AMC is owned by the Chinese.