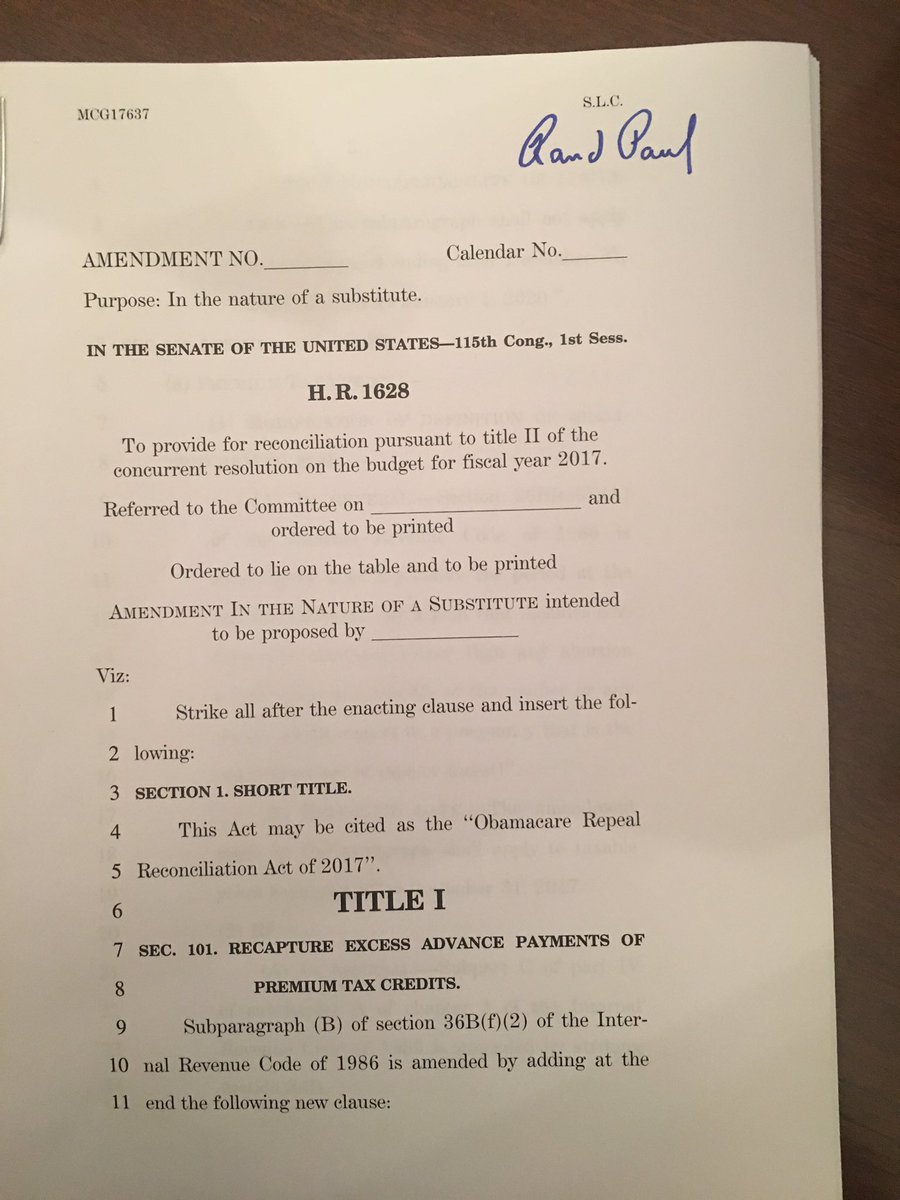 twitter.com/randpaul/status/890005235896385536
I am no expert on healthcare or health insurance. But I do understand politics and economics. I also know that the government should not be involved to the degree that it is in healthcare. And I am certain that many millions of Americans are gaming the system to rely on Medicaid and other big government programs designed to help the needy.

Medicaid now covers over 74 million people, 1 in 5 people in the U.S. The numbers were nowhere near this high of a percentage when it began in the 1960s. With the passage of Obamacare, an entitlement that Republicans were put in power to pull back, those on the Medicaid dole spiked dramatically. But is it too late? Once a government program begins, it is impossible to stop it.

Obama knew this and that is why he lied his way into ensuring that this monstrosity of the federal government’s intrusion into our healthcare system passed no matter what. People are used to it know so it now appears here to stay.

Republicans have been declaring throughout the Obama administration’s eight tumultuous and government power-grabbing years that they will repeal and replace every word of Obamacare. They even held pointless votes in the House that they knew had no chance of passage to show how serious they were.

Now that they have all the power in Washington DC, they can’t deliver. If they do not, we will see the rise of the Democrats once again as Americans get more worked up about healthcare than just about any other issue.

Republican Rand Paul from Kentucky has been leading the real effort to vote on a full repeal of Obamacare. The hapless attempts by the Senate so far have been to implement Obamacare-lite. The Republican base will not stand for this. They want government’s role in healthcare diminished not expanded. This is our last chance.


See also  Biden slammed for tweet blaming Republicans for economic problems: ‘I thought it was Russia's fault’
With my minimal knowledge on healthcare I follow people I can trust, like Rand, one of the only true small government fiscally conservative Republicans in Congress. Senate leadership cannot be trusted.

Paul released a video statement on his Twitter account on Tuesday afternoon discussing his spearheading of the Obamacare repeal movement. The Senate voted Tuesday to move forward with debate on healthcare reform and Vice President Pence had to break the tie.

“I was elected on the promise to vote to completely repeal Obamacare,” Paul said. As were many other Republicans in the red waves that crashed over Washington during the Obama administration. And if every Republican who voted for a clean repeal in 2015 when it didn’t matter voted in favor now, it would pass, according to Paul.

But he is still realistic on the chances of making real change to the crumbling health care law put forward by Democrats who always rely on giving out more goodies to the voters to secure their votes instead of standing for sustainable economic principles, like my man Rand does.

“The thing is that we have so many weak-kneed Republicans now and they need to be reminded that Obamacare is a disaster for the country,” Paul continued. Voters need to wake up and call their representatives in support of a clean repeal. The beginning of the debate on repeal to start Wednesday will still leave chunks of Obamacare in place as more support for full repeal is corralled.

Paul also tweeted out on Tuesday: “This morning,  @SenateMajLdr (Senate Majority Leader Mitch McConnell) informed me that the plan for today is to take up the 2015 clean repeal bill as I’ve urged.” They’ve done that. Now keep down this path and be the conservative party you are supposed to be. Do what your constituents put you there to do. Unfortunately, politicians, as always, say what they have to to get into office and once they are there, care more about keeping their seat than doing what is right for America.

“Maybe we can still in the future come back and revisit this and try to repeal more of Obamacare, but my hope is that we are going to repeal at least some of it now and it’s your effort that has helped us get to this point,” Paul concluded.