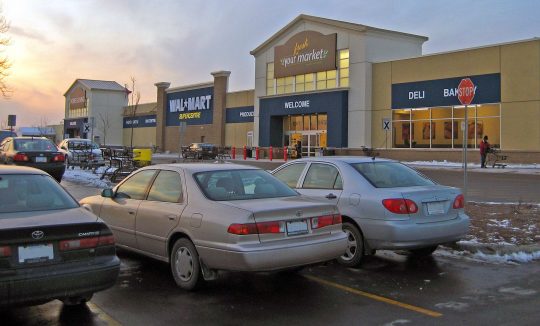 Just like we witnessed during the last recession, major retailers are laying off tens of thousands of workers, and it looks like this will be the worst year for store closings in all of U.S. history.  Many are referring to this as “the retail apocalypse”, and without a doubt this is one of the toughest stretches for retailers that we have ever seen.  But many believe that what we have witnessed so far is just the beginning.  After all, if retailers are struggling this much now, how bad will things be once the next recession really gets rolling?

Of course the truth is that things have been rocky for the retail industry for quite a few years, but the numbers are telling us that this crisis is really starting to accelerate.

According to Challenger, Gray & Christmas, retail layoffs were up a whopping 92 percent in January and February compared to the same period a year ago.  The following comes from NBC News…

More than 41,000 people have lost their jobs in the retail industry so far this year — a 92 percent spike in layoffs since the same time last year, according to a new report.

And the layoffs continue to mount, with JCPenney announcing this week it would be closing 18 stores in addition to three previously announced closures, as part of a “standard annual review.”

Yes, competition from Internet commerce is hurting the traditional retail industry, but it certainly doesn’t explain a 92 percent increase.

And very few retailers have been able to avoid this downsizing trend.  At this point, even the largest retailer in the entire country has begun “quietly closing stores”…

Walmart is closing at least 11 US stores across eight states.

For decades, Wal-Mart has been expanding extremely aggressively.

READ  Preservation Of Wealth Versus ‘You Only Live Once’: Another Victory For Retail Traders

They have plenty of cash, and so the only way that it would make sense for them to close stores is if they anticipated that we are heading into a recession.

Of course Wal-Mart is in far better shape than almost everyone else in the industry.

One of Wal-Mart’s key competitors, Shopko, has just announced that they will be shutting down all of their stores…

Shopko will liquidate its assets and close all of its remaining locations by mid-June.

The company was unable to find a buyer for the retail business and will begin winding down its operations beginning this week, the company said in statement released Monday. The decision to liquidate will bring an end to the brick-and-mortar business that began in 1962 with one location in Green Bay, Wisconsin.

Lifeway Christian Bookstores announced last week it would be closing the doors of all 170 brick and mortar stores, in a pivot to focusing on digital and e-commerce.

“The decision to close our local stores is a difficult one,” said Lifeway Chief Executive Officer Brad Waggoner. “While we had hoped to keep some stores open, current market projections show this is no longer a viable option.”

Whenever I do an article like this, I always have some readers that try to convince me that this is only happening because of the growth of Internet retailing.

And yes, Internet retailing has been growing, but it still accounts for less than 10 percent of all U.S. retail sales.  In addition, it is important to point out that Internet retailers had a very disappointing holiday season just like brick and mortar retailers did.

Ultimately, the truth is that the U.S. economy has been steadily slowing down in recent months.

During the months of December, January and February, the amount of stuff being moved around the country by truck, rail and air was lower than during all of those same months a year earlier.  The following comes from Wolf Richter…

I have a feeling that when we get the final numbers for March that they will show that this streak has now extended to four months.

Right now, unsold goods are starting to pile up in U.S. warehouses at a rate that we haven’t seen since the last recession.  Many retailers that are barely clinging to life will simply not survive if economic conditions continue to deteriorate.

Unfortunately, it appears that things are only going to get rougher for the U.S. economy in the months ahead.