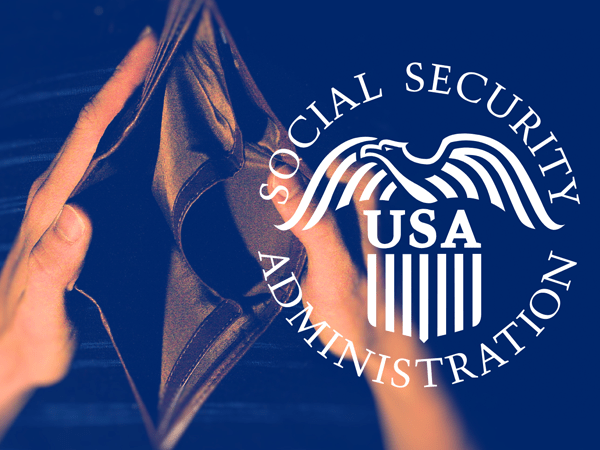 This coming January there will be 62 million Social Security (SSI) beneficiaries who will get 2.8% more in the form of a cost-of-living adjustment (COLA).

Obviously any increase is an improvement, but exactly how much will go into a retiree’s pocket is not very encouraging.

You can see the benefits payable both before the COLA and after for various groups of people in the table below:

Having an extra $34 to $79 on each Social Security check could be helpful towards a better standard of living, if price inflation didn’t take up most of the increase.

Before 1975, increasing prices in goods and services could drain value directly from SSI benefit payments, making budgeting a big challenge.

But thanks to automatic COLA legislation enacted in 1975, CPI-W (Consumer Price Index-W) got tied to annual increases in benefits.

So any time an adjustment was made, price inflation was automatically factored in. On the surface, it would seem like a retiree could maintain a basic standard of living.

But the reality is, price inflation could quickly eat up most of the 2019 COLA adjustment, and leave retiree bank accounts essentially flat. A recent Schwartz Center study may shed light on another uncomfortable reality for most retirees.

40% of Middle Class Americans May Be Poor by 65

If a single person earns less than $12,160 in a year, they are considered poor by Federal government standards.

According to Teresa Ghilarducci, an economics professor who participated in the Schwartz Center study, that number “should be doubled”.

Cited in an article on MarketWatch, she adds, “We base it on what we call the level of ‘economic deprivation… And when you double it, it’s clear that millions of older Americans could slide into poverty when they retire.” 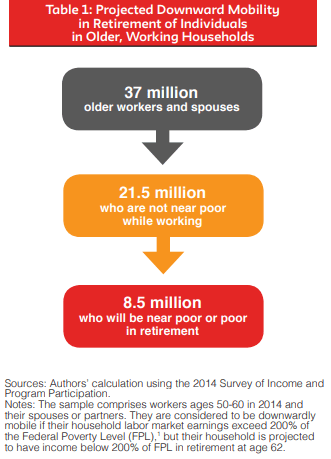 According to the study, of the 21.5 million workers who are currently 50 to 60 years old and not near poor, 40% will be near poor or poor in retirement. (See study graphic.)

Plus, some Social Security income can be taxed, adding to the burden.

Writing at MarketWatch, Paul Brandus says this means “many retirees will wind up sending a portion of their income right back to the government.”

This recent cost-of-living increase also follows a period between 2009 and 2018, where there were three years with no increase in SSI benefits, as reported by internal Social Security Administration documents.

And USA Today reports a problem with the CPI-W inflation method for seniors:

Medical care and housing, which make up a substantive portion of expenditures for seniors, are given less weighting in the CPI-W in favor of education, apparel, and transportation expenses, which matter less to seniors.

The same article also highlighted a “34% drop in purchasing power” for Social Security dollars since 2000.

READ  This Democrat MISTAKE Will Create Their Downfall

Added together, it appears the “Golden Years” for a larger percentage of retirees may not be so “golden” after all.

Experts recommend slashing your living expenses, retiring at the age where you’ll receive full payments, and keeping a realistic eye on your living standards.

If you’re still working or nearing retirement, keep all retirement options on the table so you can form a solid plan.

Bolster Your Retirement With Stable Assets that Appreciate in Value

Social Security is a nice piece of insurance to have. And even if it doesn’t run out of funds (as many are predicting), it is still under intense financial pressure.

The reality of price inflation poses ever-increasing challenges to retiring on Social Security and savings alone. But retirees still have options.

Don’t let inflation drive your retirement into an early grave. Consider investing in physical assets like gold and silver that remain useful tools you can use to bolster your portfolio and ultimately your retirement.