If COVID has solidified one thing, it is that playing the market must be democratic. And as always in a democracy, people get what they deserve: That means we are seeing tons of amateur investors pour into the market, skewing sentiment away from fundamentals.  Much of that goes down on the fee-free Robinhood trading app, whose median user age is 31, but with college kids increasingly jumping on board. And whether they know anything at all about oil—or even markets in general—they have decided that when it comes to hydrocarbons, they love Marathon Oil (NYSE: MRO).

That is some serious crowd-gathering.

So, is it just straight-up parroting going on here, or is there a method to the madness?

Is Marathon really that great? Should it be the Robinhood user’s number one oil and gas stock?

First of all, consider that Wall Street is growing increasingly critical of these amateur investors who are such a large force that they have the power to drive the market and render fundamentals irrelevant—at least temporarily.

They are like the catwalk of stock traders: fashion over fundamentals.

They have been making all kinds of contrarian moves since the pandemic, including buying tons of stock in bankrupt companies like Hertz and JCPenney and betting on airlines at a time when legendary investors such as Warren Buffett were divesting—fast. They even bet on cruise lines during a near-global lockdown.

Related: Iranian Oil Exports Much Higher Than Official Data Suggests
Marathon is different, though. Marathon is not a bankrupt company, nor is it an overtly contrarian play.

So, what gives, and why is it more popular than, say, ExxonMobil?

The simple–and likely only—answer is that it is a cheap stock, so the 30-something and younger investors can afford it, even though Robinhood does now offer fractional shares. The reasoning of the amateur investors is often this: “I need to diversify my portfolio, which means holding at least one oil and gas stock, and this is the only major I can afford.”

It is as simple as that. 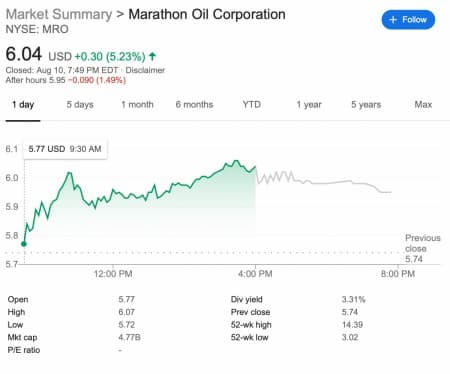 There is also a chance for a more significant upside when a stock starts at such a low price—if oil prices ever start climbing again, that is.

The view from the more advanced trader is rather more nuanced.

First of all, Marathon Oil did not release its Q2 2020 earnings report until August 6th, and when it did, it was with a net loss of $750 million or $0.95 per diluted share. Its adjusted net loss was $477 million ($0.60 per diluted share). MRO reported a net operating cash flow of $9 million ($86 million prior to changes in working capital). That $9 million is a bit short considering that it spent nearly $140 million on capital projects.

That is a fairly grim picture, but there is one thing that stands out: Future cash flow for the full year.

CEO Lee Tillman noted that along with lowering capital spending guidance and raising oil production guidance for the full year, “We believe the Company is successfully positioned to generate free cash flow at commodity prices well below the current forward curve, while protecting operational momentum into 2021.”

Related: Green Hydrogen Prices Are Set To Drop By 50% During The Next Decades

“Though premature to provide a specific business plan, our differentiated capital efficiency is illustrated by a 2021 benchmark maintenance scenario that we believe could deliver total Company oil production in-line with 4Q20 at a free cash flow breakeven of approximately $35/bbl.”

In other words, they are positioned for free-cash-flow generation at commodity prices that are quite a bit lower than they are right now.

If that actually pans out, the Millennial investor scooping up Marathon stock on Robinhood could end up holding a company that is flush with cash soon enough.

The company, overall, has also become more efficient and it suspended dividends. Meanwhile, Exxon is desperately holding onto its dividend, even in this price environment.

None of this means much at all to the novice investor buying up shares on Robinhood, and Wall Street would like to suggest that only those who have the expertise to pick apart an earnings report should be investing. Or, at least, they should be in small enough numbers that they are not driving the market in directions that it has no business going and creating bubbles that will eventually burst.

Perhaps. Once again, though, investing is now democratic, and Wall Street will have to adjust to this Robinhood effect.

When it comes to Marathon, despite poor quarterly reports (which is really the standard these days, anyway), the Robinhood investor can certainly be forgiven for piling into this stock. After all, it has managed to raise its full-year oil production outlook at the same time as it keeps costs under control and continues to lower capex. Wall Street isn’t really going to argue at this point.

By Julianne Geiger for Oilprice.com