RUSH: A lot of polling out there today, folks, a lot of misleading, misrepresentative polling. It’s stunning how we continue to be stuck in the middle of a grand illusion. Do you realize, just to hit you between the eyes with everything here, folks, from the get-go, from the beginning, starting on election night and even prior, but let’s just use election night. Trump wins, shocks the Washington establishment, shocks the world, the coup begins, the effort to remove Trump — and it has not stopped. 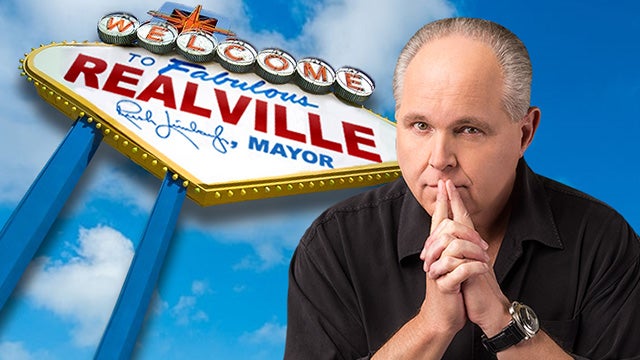 It has been one continuous overall effort, get Trump thrown out of office or reverse the election results. And through this phase there have been numerous discoveries. Trump colluded with Russia, Kavanaugh had a rape train, Trump wanted Ukraine to dig up dirt, Avenatti, Stormy Daniels, every one of these things has been a shocking discovery, apparently. And through it all, the thing to keep — now Trump has released the transcript. You can read the transcript. This is the most amazing of all of this, second only to the Mueller report.

The Mueller report shows no collusion, no obstruction, and yet they continue as though it does. Now, there’s a very interesting reason why this is the case. I’m gonna illustrate here in a minute. They believe that there is no such thing as public opinion. I’m telling you right now they think public opinion doesn’t matter. Public opinion is what their published polls say it is. That’s a big difference, folks. It is a huge difference. There is no public opinion.

NBC found out themselves, NBC, Meet the Press, sent some reporters. They had to get their flu shots, vaccine shots, and visas to go out to other states. They went out to try to find out just how feverishly people are talking and thinking about impeachment. They found nobody cares. They can’t believe it. And yet the polls that they put out claim 49%, 51%, 48% want Trump impeached and gone. And yet whenever they leave Washington to go out and try to find evidence of it from the general public, they can’t. So what’s the disconnect?

The disconnect is that there is one glaring truth. And this is why it is not hard to defend Donald Trump. They have nothing! They never have had anything that is real. And even this impeachment and this transcript of the phone call with the Ukraine president and Vindman and the whistleblower. It isn’t real. None of it is real. They have yet to have a fact backing up their discoveries or their claims or their assertions.

But in politics this one may — and it would be a tough argument because none of us has been alive the entire time the country’s been around, and there have been some outrageous things happen in this country from the beginning. But in our lifetimes, this is the biggest sustained illusion that I have ever seen. That’s what’s so frustrating about it.