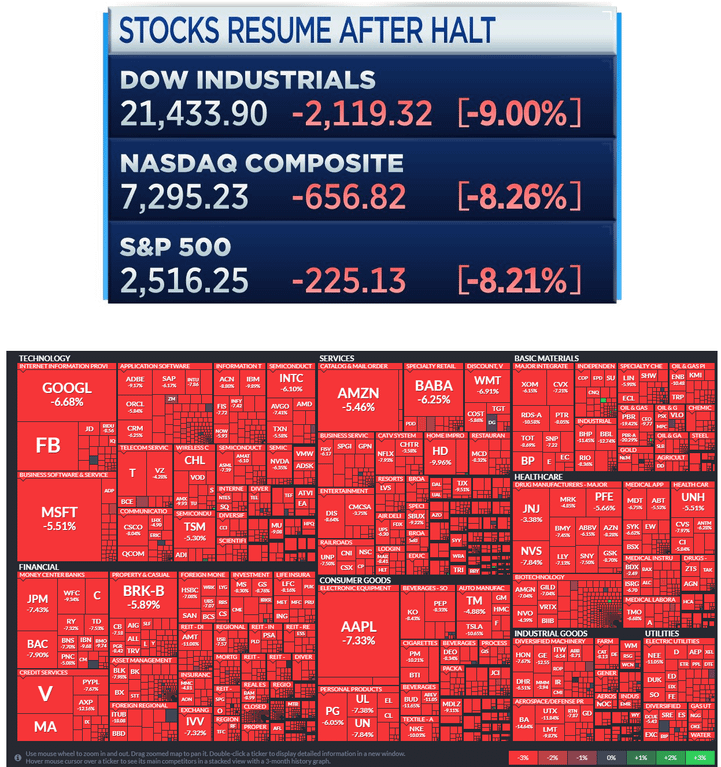 After another 15 minute trading halt a little after the open, markets opened down over -9% when trading resumed; but have now bounced off those extreme lows just a bit as of now.

The S&P 500 and NASDAQ have now joined the Dow, Russell 2000 and Dow Transports into bear market territory, down over -20% from ATHs.

U.S. stocks fell sharply once again on Thursday after an address from President Donald Trump failed to quell concerns over the possible economic slowdown from the coronavirus.

The S&P 500 traded down 8.3% after trading paused due to a 15-minute “circuit breaker,” which temporarily halts trading at the New York Stock Exchange and Nasdaq. The broad index also joined the Dow Jones Industrial Average in bear market territory. The 30-stock Dow slid more than 2,100 points, or 9.2%. The Nasdaq Composite dropped 8.4%.

Before the open, futures contracts tied to the major indexes fell to their so-called limit down thresholds, sliding 5%. These limit down levels act as a floor for selling until regular trading begins.

The Cboe Volatility Index (VIX), widely considered the best fear gauge on Wall Street, jumped to more than 66 and hit its highest level since 2008.

On Wednesday, the Dow ended its historic 11-year bull market run by closing in bear-market territory. A bear market marks a 20% decline from all-time highs. The S&P 500 was just shy of that threshold going into Thursday’s trading and was poised to enter bear market territory based on futures losses.

READ  They Go After Platforms Hosted Beyond Their Control And Are Using The Recent Capitol Riot To Consolidate Power....
READ  Risk On: $45 Billion Injected Into Stock Market Funds In One Week
20 views