When the clock struck noon, the masks came off.

It was Nov. 21, 1918, and San Francisco residents gathered in the streets to celebrate not only the recent end of World War I and the Allies’ victory, but also the end of an onerous ordinance that shut down the city and required all residents and visitors to wear face coverings in public to stop the spread of the so-called Spanish flu.

A blaring whistle alerted gratified residents across the city and, as the San Francisco Chronicle reported at the time, “the sidewalks and runnels were strewn with the relics of a torturous month,” despite warnings from the health department to maintain face coverings. As celebrations continued and residents flocked to theaters, restaurants and other public spaces soon thereafter, city officials would soon learn their problems were far from over.

Now, amid the coronavirus pandemic, as President Donald Trump urges the reopening of the country and some states, such as Georgia, move to resume normal business even as new cases emerge, how officials acted during the 1918 flu pandemic, specifically in cities such as San Francisco, offers a cautionary tale about the dangers of doing so too soon.

Alex Navarro, the assistant director of the Center for the History of Medicine at the University of Michigan, which detailed historical accounts of the 1918-19 flu pandemic in 43 cities, told NBC News in a phone interview that officials often acted quickly at the time but restrictions were eased to varying degrees.

“There was a lot of pressure in pretty much all of these American cities to reopen,” said Navarro, whose research was done in conjunction with the Centers for Disease Control and Prevention. “When they removed those restrictions too soon, then many cities saw a resurgence in cases.”

Graph showing how deaths ramped up in St. Louis when social distancing ended during the 1918 flu 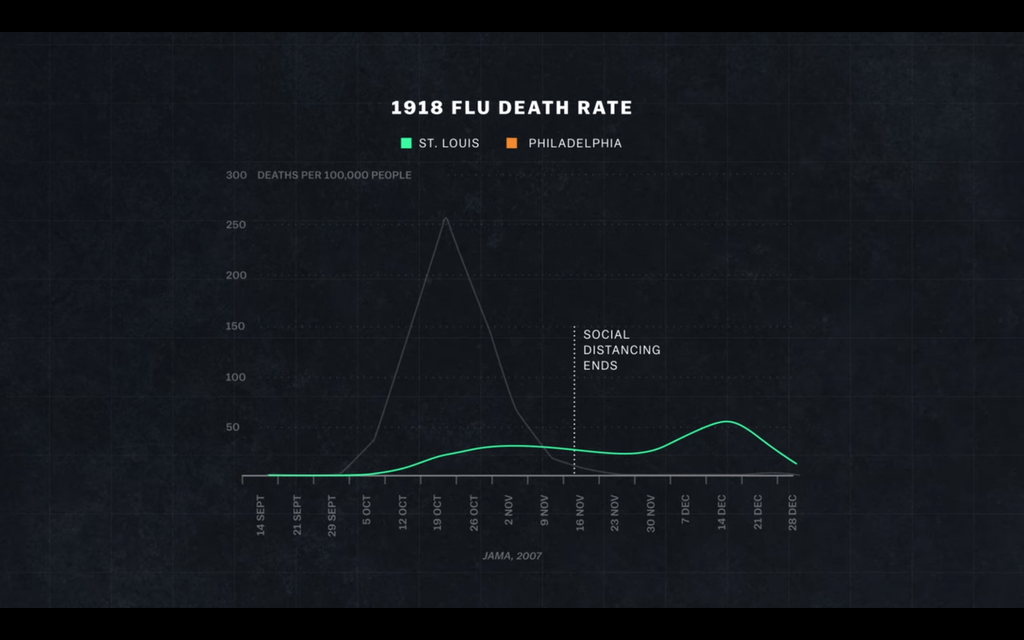 This is a graph from the latest episode of Explained on Netflix discussing Covid-19. St. Louis quarantined early into the outbreak and was able to flatten their curve, while Philadelphia began late (and held a large parade) which led to a much higher death rate. If we’re not careful about when to re-open our states, our curves could ramp up again just like it did in St. Louis (which needed to implement a 2nd quarantine).