While US personal incomes grew, as expected, at 0.3% MoM, Americans resumed spending fare more than they make (increasing 0.6% MoM in April). For the 28th month in a row, YoY growth in spending has outpaced incomes, sending the savings rate back down to just 2.8, the lowest since the debt-funded holiday spending spree of December 2017, and just shy of record lows.

Spending YoY is the highest since April 2017:

Adjusted for inflation, real consumption rose 0.4%, double the median projection of 0.2%. The Commerce Department said spending for gasoline and other energy goods, as well as household utilities, were leading contributors to the monthly increase in real outlays. Real durable goods spending, rose 0.3% after a 1.9% increase in the prior month; nondurable goods advanced 0.4% for a second month. Outlays on services, adjusted for inflation, rose 0.4% after a 0.3% gain in prior month.

On the income side:

The Federal Reserve’s plan for accelerating the pace of monetary policy-tightening might be running into some trouble.

Investors have unwound bets the Fed will pick up the pace of interest-rate increases over the past few days as political and financial turmoil rattles countries such as Italy, Turkey and Argentina.

The Fed has penciled in three rate increases for 2018, and investors still see a more than 70% chance of that happening. But they have grown increasingly skeptical the Fed will deliver a fourth increase this year. That is something investors and Fed officials had been warming up to recently amid evidence of stronger U.S. growth and inflation.

Markets are now pricing in just a 24% chance the Fed raises rates four or more times this year, according to CME Group data. That is down from over 50% last week. 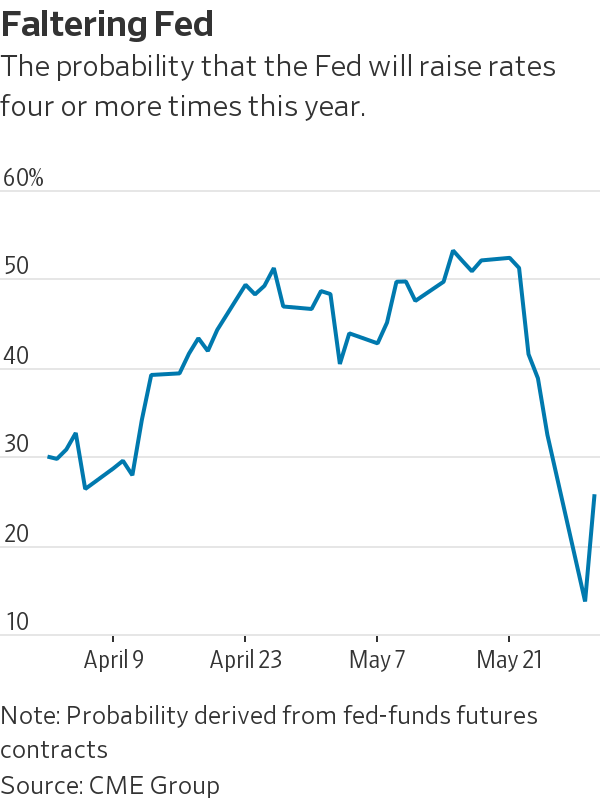 Political turmoil unfolding in Italy–which is now facing the prospect of snap elections that could strengthen the position of anti-euro parties–and volatility across emerging markets are the main culprit behind the markets’ dimmer outlook. Some investors also worry U.S. trade policy could hurt global growth as the Trump administration puts tariffs in place on Chinese and European goods.

Is another global financial crisis on the horizon?

Investors are increasingly worried that an escalating political crisisin Italy could lead to a populist, euroskeptic government taking power. As a result, there’s rising uncertainty about whether the country might eventually abandon the euro currency zone or default on its giant debt pile. To make things worse, the Trump administration continues to toy with the idea of a trade war with Europe and China. That would be the last thing the global economy would need if the Italian situation deteriorates further. Debt crises and trade wars are a toxic combination.

To fully understand the risk, it’s helpful to recall that before there was a Brexit, there was the threat of Grexit. There was widespread concern a few years ago that Greece’s government debt crisis would force it to exit the eurozone, and that such a shock departure would be a crushing blow to both the broader European economy, in the middle of recession, and the American economy, which was still recovering from its own downturn.

These fears prompted what is perhaps the most amazing — albeit apocalyptic — research note ever published by a major Wall Street bank or investment firm. In December 2011, Citigroup clients were treated to dark speculation by the firm’s chief economist, Willem Buiter, on what might happen if Greece’s departure led to a daisy chain of eurozone exits and the eventual collapse of the European Union:

A breakup of the euro area [currency zone] would be rather like the movie War of the Roses version of a divorce: disruptive, destructive, and without any winners. … If Spain and Italy were to exit, there would be a collapse of systemically important financial institutions throughout the European Union and North America and years of global depression. … Even if the breakup does not destroy the EU completely and does not represent a prelude to a return to the intra-European national and regional hostilities, including civil wars and wars, that were the bread and butter of European history between the fall of the Roman empire and the gradual emergence of the European Union from the ashes of two made-in-Europe world wars, the case for keeping the euro area show on the road would seem to be a strong one: financially, economically, and politically, including geopolitically. [Willem Buiter, Citigroup]

So, yeah, pretty much everything other than pestilence, famine, and zombies roaming through Manhattan. Now generally, Wall Street research doesn’t read like the Book of Revelations or a dystopian alt-history novel. But Citigroup was hardly the only financial player pondering the worst.

Thankfully, the worst didn’t happen. Europe muddled through thanks to a combination of Greek debt bailouts and massive money printing by the European Central Bank. But Italy poses a far bigger threat than Greece ever did.

Italy is the eurozone’s third-largest economy, 10 times the size of Greece’s. It also has the world’s third-largest sovereign debt market, some $2.7 trillion. Only Greece has a higher public debt-to-GDP ratio in the eurozone. My AEI colleague Desmond Lachman, a former International Monetary Fund official and Wall Street emerging market strategist, argues that Italy’s troubles have the potential to roil the global economy much like the 2008 Lehman bankruptcy. (The 10th anniversary of “Free Market Day”is coming!) America wouldn’t be spared.

That’s just one of the problems with Donald Trump’s America First worldview. It ignores how America is deeply and irreversibly enmeshed in the global economy through linkages we probably don’t fully understand, as the original global financial crisis of 2008 showed.

Listen to this podcast on our site by clicking here or subscribe on iTunes here.

This time on the Financial Sense Big Picture, Jim Puplava discusses why he thinks disappearing liquidity could be the next big unseen factor to kick off a crisis. There are three large forces precipitating this coming crisis, he noted: high-frequency trading, the ETF and passive index fund fad, and government regulation.

READ  Guy brags about breaking a world record with 31 made 3 pointers in 1 minute. Kenny Smith challenges him to a 3 point contest, where he misses every shot.

Liquidity Is the New Leverage

Liquidity could become a serious problem for basic market operations, Puplava noted, and high-frequency trading is the match that could start the fire.

Whenever we head into a bear market, Puplava noted, there’s always one factor that nobody sees coming. As Goldman Sachs recently warned, “liquidity is the new leverage if we head into another downturn.”

On a daily basis, almost 90 percent of trading on exchanges is carried out through high-frequency trading and index investing, Puplava noted. In the words of recent FS Insider guest Don Coxe, markets are no longer driven by humans but by machines, and machines know the price of everything but the value of nothing.

In the event of a major macro event or worse, a monetary event, we could see markets move down rapidly, such as happened during the Flash Crash and also the Taper Tantrum. A minor correction is magnified because as HFT enters the picture, bids happen in nanoseconds and HFT traders withdraw liquidity from the market.

Additionally, it isn’t just equities that will be impacted. Bond markets, commodities, currencies, and more are now bought and sold largely through HFT. As these split-second trades go bidless, reducing the price at which someone steps in, it can drive markets down in the blink of an eye.

“Machines — and not humans — are making trading decisions,” Puplava said. “Humans have the ability to process complex macro information. … The result is, we’re seeing more instances where this occurs in this decade as the machines take over the market. … This feedback loop kicks in as investors interpret this price decline as confirmation that there must be news out there that’s really bad.”

Mortgage Rates, at a Five-Year High, Mean Headwinds for Housing

The housing market is one of many asset classes that have been inflated by the Fed and risen to irrational levels in the Everything Bubble.

After Fed “Secretly” Put US Operations On “Troubled” Watchlist

Some Public Pensions Funds Could Run Dry in Downturn

When a recession hits, pensions “will be on the chopping block.”

The Gap Between Revenue and Spending Will Grow… pic.twitter.com/f6b5KBAhRK