by Pamela Williams
This is a huge development update on the Steve Scalise shooting.  It was reported to me by IWB Sleuths.
Steve Scalise was under pressure from the Democrats to step down as GOP Majority Whip.  We have a Wikileaks email sent to John Podesta asking him to sign a petition demanding that Steve Scalise step down.
tweetsave.com/lizcrokin/status/878815612893515776 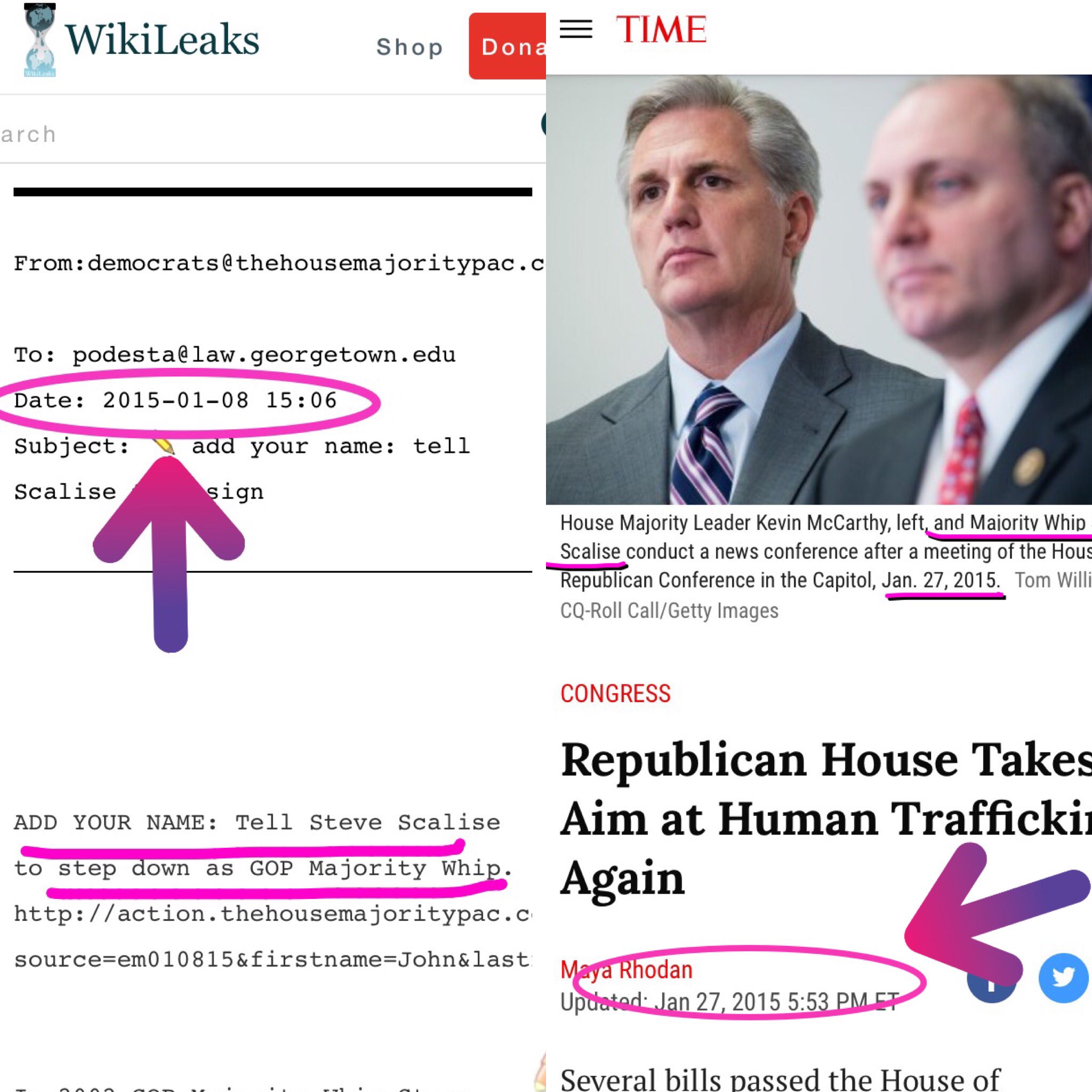 I just want to say the origin of this news come from Liz Crokin, who is one of the best reporters we have today.  She rocks!
Here is the original email to Podesta:  archive.is/KBd2o
So it seems that the Democrats had a campaign going to remove Steve Scalise.

Lets look into the background of Scalise to understand why he was such a threat to them.  Of course, you will see from the email the following reason was given:
NAME: John Podesta
PETITION SIGNATURE: PENDING
John:
Bottom line: the third-ranking member in the House spoke at a rally sponsored by white supremacists! It’s time for him to step down from his leadership position for the good of the country.
The email began with the following:
From:democrats@thehousemajoritypac.com
To: podesta@law.georgetown.edu
Date: 2015-01-08 15:06
Subject: ? add your name: tell Scalise to resign

So we see the reason given was basically he was a white supremacist…lol.  Now, we will talk about the important cause he had been assigned to work on by President Trump.

www.912communique.com/forum/topics/experts-believe-they-know-why-there-was-an-assassination-attempt
On February 24th, 2017, barely a month into the Trump presidency, President Trump announced an initiative to aggressively pursue the prosecution of human traffickers and their pedophile clients.  By April 2nd, just ten weeks into Trump’s presidency the war against pedophilia had already resulted in 3,000 arrests compared to Obama’s Justice Department that had bothered to arrest only 400 low-level pedophiles in all of 2016.
President Trump was turning up the heat on human traffickers and their pedophile clients, and in response the Deep State ramped up its efforts to end the Trump presidency before those arrested had the chance to implicate the Deep States’ elected operatives that had taken years of careful cultivating to put in place.
Scalise had enlisted in President Trump’s army fighting for the victims of human sex trafficking.  Now he lies in a hospital fighting for his life.
If you think this was the act of a crazed assassin acting independently then consider the role that NAMBLA – the North American Man-Boy-Love Association – is playing in the violent Antifa movement that was exposed by the good people at the Daily Caller in an article entitled “Documents Tie Berkeley Riot Organizers To Pro-Pedophilia Group, NAMBLA.”
Remember the words of the F.B.I. agent who had examined the Weiner-Abedin laptop:
“There is enough for her and the entire government to be brought down.  People do not realize how enormous this whole situation actually is.
Why did Hillary Clinton and Barack Obama refuse to appoint an inspector general to watch over the State Department for five years and then, after one had been appointed an internal memo surfaced that claimed senior State Department officials quashed eight different internal investigations of wrongdoing in the diplomatic corps?
The F.B.I. and 16 other “intelligence” agencies have spent 11 months investigating Donald Trump with nothing to show for their efforts.

I just did a report on the FBI COVER-UP OF THE SCALISE SHOOTING.  Here is a part of the report:
Of course, I have previously said I blame James Comey for the destruction of the highest law agency in the land, the FBI.  This still applies, and I will always see this as James Comey’s legacy.  It is all he deserves!  Here we are seeing another bizarre action of the FBI in covering up the GOP Baseball Shooting.  What is their motive in doing this?
When James Hodgkinson walked onto the baseball field and fired on those practicing a beloved American game, he committed the most serious political assassination in decades.  The Capitol Police were there at the scene, and they acted in saving lives. If they had not, it would have been a massacre.
There was little for the FBI to do here.  The motives of the shooter are pretty clear, and he had a list of  names of his targets.  He ranted and raved about Republicans on social media, and he asked before the shooting were the players Republicans or Democrats.  Looks like pretty cut and dried to me.  Yet, the FBI is actually treating Hodgkinson as if he were a Muslim terrorist.  They are actually appearing to launch a cover-up of his motives.
Here is a shocker for you:  There appears to be an odd denial of Rep. DeSantis’ account of the shooter asking if the players were Republican or Democrat. Why would the FBI DO THIS?  The following is what Rep. DeSantis said:  www.nbcnews.com/news/us-news/rep-desantis-shooting-suspect-asked-if-republicans-or-democrats-field-n772351

The following is reported by:  fellowshipoftheminds.com/2017/06/19/pedogate-and-the-attempted-assassination-of-rep-steve-scalise/
On June 14, the day of the shooting, President Trump and First Lady Melania made a surprise, unscheduled visit to Rep. Scalise at MedStar. They were accompanied by Trump’s personal physician, Dr. Ronny Jackson. (New York Daily News)

on February 21, President Trump had a meeting with human trafficking experts, after which he said in a short, dramatic press conference that the issue of sex trafficking has been on the radar of the federal government “for some time,” but that since he took office, the investigation has become “much more focused”. Trump vowed that he will direct the Department of Justice, the Department of Homeland Security and other federal agencies to devote more resources and personnel so as to bring the “full force and weight of our government” to put an end to the “horrific, really horrific crimes taking place.”
Recall that three weeks ago, the new Trump administration’s Department of Homeland Security released a very curious PSA on human trafficking which prominently featured a pizzeria.
What you may not know is that Trump has long inveighed against pedophilia. In a tweet on October 8, 2012, Donald Trump said something must be done about the sex trafficking of “missing children” and that pedophiles should be put to death after a “fast trial”.

President Trump said the following at a press conference:
“I want to make it clear today that my administration will focus on ending the absolutely horrific practice of human trafficking and I am prepared to bring the full force and weight of our government at the federal level in order to solve this horrific problem that is getting worse.
Human trafficking is a dire problem, both domestically and internationally, and is one that’s made really a challenge. And it’s really made possible to a large extent, more of a modern phenomenon, by what’s taking place on the Internet, as you probably know.
Solving the human trafficking epidemic, which is what it is, is a priority for my administration. We’re going to help out a lot. ‘Solve’ is a wonderful word, a beautiful word, but I can tell you, we’re going to help a lot.”

What type of opposition was President Trump receiving from Democrats?  The following has blown my mind…again:  Supreme Court Justice Ginsburg favors decriminalizing pedophilia and child sex trafficking.  This is unbelievable that anyone would want to do this, but unfortunately it is true!  She is a Clinton appointee, and recommended in a book weeping changes be made by the federal government in the name of sex equality.  What did she mean by that?  This is what she wants:
Ginsburg recommends that the Mann Act be repealed. The Mann Act is a federal law passed in 1910 which makes it a felony to engage in interstate or foreign commerce transport of “any woman or girl for the purpose of prostitution or debauchery, or for any other immoral purpose”.
From Sex Bias in the U.S. Code, pp. 98-99:
The Mann Act . . . poses the invasion of privacy issue in an acute form. The Mann Act also is offensive because of the image of women it perpetuates . . . . It was meant to protect from ‘the villainous interstate and international traffic in women and girls,’ ‘those women and girls who, if given a fair chance, would, in all human probability, have been good wives and mothers and useful citizens. . . .’
Also Ruth Bader Ginsburg implies sexual abuse of children 12-years or older should not be a crime:
On p. 102 of Sex Bias in the U.S. Code, under the sub-heading “Recommendations,” Ginsburg and Feigen-Fasteau recommend a revision of 18 U.S.C. §2032 from “carnal knowledge of any female, not his wife who has not attained the age of sixteen years” to “A person is guilty of an offense if he engages in a sexual act with another person, not his spouse, and . . . the other person is, in fact, less than 12 years old“.
You have to remember this woman sits on the Supreme Court!
I want to end this report by quoting a verse from the Bible:
“But who so shall offend one of these little ones which believe in me, it were better for him that a millstone were hanged about his neck, and that he were drowned in the depth of the sea.” -Matthew 18:6