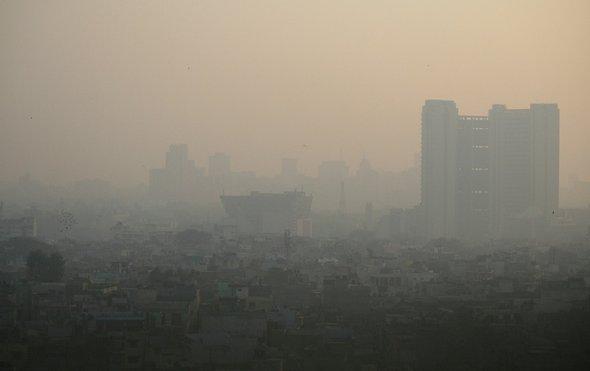 Pollution in the atmosphere is having an unexpected consequence, scientists say—it’s helping to cool the climate, masking some of the global warming that’s occurred so far.
That means efforts worldwide to clean up the air may cause an increase in warming, as well as other climate effects, as this pollution disappears.
New research is helping to quantify just how big that effect might be. A study published this month in the journal Geophysical Research Letters suggests that eliminating the human emission of aerosols—tiny, air-polluting particles often released by industrial activities—could result in additional global warming of anywhere from half a degree to 1 degree Celsius.
This would virtually ensure that the planet will warm beyond the most stringent climate targets outlined in the Paris climate agreement. World leaders have set an ambitious goal of keeping global temperatures within 1.5 to 2 degrees Celsius of their preindustrial levels. But research suggests the world has already warmed by about 1 degree—meaning even another half a degree of warming could push the planet into dangerous territory.
“Since we’re trying to keep to a 1.5- or 2-degree target, then this is something we still need to keep in mind,” said Bjørn Samset, a climate scientist at Norway’s CICERO Center for International Climate Research and the study’s lead author.

See also  This is the perfect environment for a collapse - Everyone is not hedging, everyone keeps calling a pivot bc of a recession and everyone is buying gold/BTC

A U.S. Navy ship is trapped in Montreal until spring due to icy waters

A newly commissioned Navy warship will be wintering in Montreal after its journey to Florida was interrupted by cold and ice.
A Navy spokeswoman says the USS Little Rock was commissioned in Buffalo on Dec. 16 and was expected to make its way to its home port in Mayport, Fla.
Instead, the 118-metre Freedom-variant vessel has been moored in Montreal’s Old Port area since Christmas Eve due to unusually heavy ice conditions.