by Ruby Henley
After reviewing real-time transcripts and audio from the Las Vegas Metro Police Department, along with Firefighters; it is shocking to realize the Las Vegas massacre was a mass shooting event with multiple shooters. Not long after real-time audio events between the police and firefighters, the mainstream news media began a false narrative that Stephen Paddock was a “lone wolf.”
Although civilians and police officers alike were eye witnesses reporting multiple shooters on the ground, the “handlers” leaped over actual eye witness reports to establish a fictitious narrative that would dominate mainstream news media.
The media was obviously sent orders to quickly turn on damage control and re-craft the “nightmare” into  one in which Stephen Paddock had setup a meticulously planned “military-style” ambush of innocent people enjoying themselves in “Sin City.”
I liken this to the “Killing Fields of Las Vegas” or to the “Hunger Games of Las Vegas,” as honestly it could be described as both of these things.  A group of innocent people were herded into an area that was then closed off by fences, lights were turned on them, and gunfire thought to be fireworks began to mow them down.
I want to discuss timeline events which are authentic and prove that “the powers that be” have yet again betrayed the American people, treating them like mere chattel.

11:23-25: Suspect reported down inside his room in Mandalay Bay.
“We are clearing this room. We have one suspect down.”

11:26-27: Officers announce and execute “another explosive breach,” then say the area is clear.
“The breach is going off here in about 5 seconds.”
“We’ve got these two rooms secure. We’ve got one suspect down, multiple firearms.”

NEXT as the clock nears and rounds midnight, the officers in the gunman’s room begin to turn up clues — including his address and the name of a possible person of interest.
BUT meanwhile, officers across the city struggle to vet and investigate a series of active shooter reports.

The following video offers an eyewitness account by a woman, who meticulously reports on her ordeal of staying at the hotel Aria, walking over to Planet Hollywood to eat, and ended up being quarantined by police in an underground room for hours.  Her father is an ex-police officer, from whom I am sure she learned her skills of documentation and her knowledge of guns.

My experience in Las Vegas during the shooting event at Planet Hollywood. CORRECTION TO TIMELINE EXPLANATION can be viewed here  https://www.youtube.com/watch?v=ntiv7RcMP7k&feature=youtu.be
Official Time is within 4 minutes of 11:22pm Nevada time. Also, please excuse the audio when I am doing the screencast. The webcam mic is crackling.
VIDEO CONFIRMATION OF CHAOS IN PLANET HOLLYWOOD THAT IS TIMESTAMPED ON FACEBOOK FOR THAT EVENING!!! THANK YOU TO COMMENTER B PEG for posting this here.
www.facebook.com/dioakim/videos/pcb.10211737913536851/10211737869735756/?type=3&theater
POLICE SCANNER TRANSCRIPT : forbiddenknowledgetv.net/eyewitness-report-of-shooting-at-the-tropicana-and-ny-ny/
Gio Rios and his Girlfriend shot at In many different locations beginning with the Route 91 festival. PLEASE LISTEN TO HIM. He recounts shots fired and also crossfire situations during his long night!!! …
www.youtube.com/watch?v=ca3UdjrKt_Y&t=382s
Canadian Couple in Bellagio for 10th anniversary Shots fired in the Lobby of the Hotel
10/18/17 YOUTUBE HAS TAKEN THIS VIDEO DOWN FOR THE 2ND TIME. I’M CURRENTLY SEARCHING FOR A NEW LINK TO THIS VIDEO. You can read the transcript of Jeff’s account  Episode 38 Mandalay Bay the Untold eyewitnes stories.
Austin and Patrick – Shots Fired at New York New York

People running at the Aria

www.globalresearch.ca/las-vegas-shooting-an-in-depth-analysis-timeline-of-events-as-they-occurred/5612849
Las Vegas Shooting: An In-depth Analysis. Timeline of Events as They Occurred
A detailed analysis of Las Vegas Metro Police Department (LVMPD) radio traffic –
The following confirms that gunshots came from Gate 7:
10:11 pm
Officer reports that the gunfire ‘sounds like its coming from an elevated position.’
Officer reports ‘multiple casualties.’
“Control be advised: shots are coming from Gate 7” (This report verifies that a second active shooter may be firing from Gate 7)

The following lends itself to the report there were active shooters at other venues other than the Mandalay.  Also, shockingly we have TWO SHOOTING LOCATIONS!  Remember this is actually police transcript:
10:43 pm
Pedestrian reports ‘older white male with black fatigues and a black bag went into a white motorhome by the Motel 6 (Corner of Cobalt and Tropicana on the south side.) Witnesses say he came from the area of the shooting.

ALERT!
SECOND SHOOTING SCENE:
10:46 pm
Multiple casualties reported at Giles and Alibaba.
10:48 pm
Around 20 dead bodies reported in the venue.
YOU MUST WATCH THE FOLLOWING VIDEO ABOUT THE SECOND SHOOTING SCENE:
www.youtube.com/watch?v=XEq73_Zm04M
11:02 pm
Officer reports that a man in a maroon shirt and black short did not listen to his orders. He was headed to the Delano.
11:03 pm
Report of active shooters headed down the escalator from New York New York to the Excalibur.
[End of Transcript #1]

11:06 pm
Report: ‘Many subjects were down […] shooter at front desk of New York New York.’
Leaving the strip listening to live police scanner. 911 “Many subjects are down” / “Shooter at the front desk of NY NY” #LasVegasShooting pic.twitter.com/jcp96yTOcv
— Deep State Intel (@DeepStvte) October 11, 2017
11:07 pm
Officer reports that a male suspect got out of a white Ford super-duty dually truck and ran north with a rifle and hid in the bushes. 20-30 years of age. (Transcript #3)

ALERT!  LOOK AT THIS:
11:08 pm
Control: ‘Please be advised there is a woman with a gunshot wound to the head at the Tropicana.’ (Transcript #3)
YES, YOU READ THAT RIGHT – THE TROPICANA.

THE FOLLOWING PIC IS CIRCULATING AROUND THE INTERNET, BUT IT IS STRIKE TEAM 6 AT THE TROPICANA RESPONDING TO A CALL:  A 6-man Strike Team enters the casino floor at the Tropicana. (Screenshot via KPCCRadio/YouTube)

www.globalresearch.ca/las-vegas-shooting-an-in-depth-analysis-timeline-of-events-as-they-occurred/5612849
This is interesting as reporter Laura Loomer said she had a receipt which might prove Marilou Danley was with Stephen Paddock.
11:59 pm
Zebra-Twenty finds a credit card in the shooter’s room which bears the name “Marilou Danley” on it. (Transcript #3)

Here again, we have another mention of Giles:
12:20 am
Reports of gunshot victims at Reno and Giles
Officer: ‘One in custody at the Motel 6.’


See also  Floods hits the DESERT of Las Vegas! Casinos and airports UNDERWATER
And here:
www.youtube.com/watch?v=gpMrm1xUJ40
Again to back up reports and audio on second shooting scene:
atavisionary.com/least-two-shooters-las-vegas/

“CONFIRMED there are at least 2 shooters with fully automatic weapons,” a police officer reported at 18:54 in the recording.
Multiple scenes then developed across Las Vegas, with police reporting and confirming multiple active shooters at the Tropicana and New York, New York Hotel-Casino (NY, NY).
“CONFIRMED – Giles and Alibaba, casualties, East of the Catholic Shrine. SO WE HAVE TWO SCENES!,” said another officer at 38:30 in the recoding, confirming that there were casualties at Giles and Alibaba, a location out of range of Stephen Paddock’s gunfire from the Mandalay Bay. 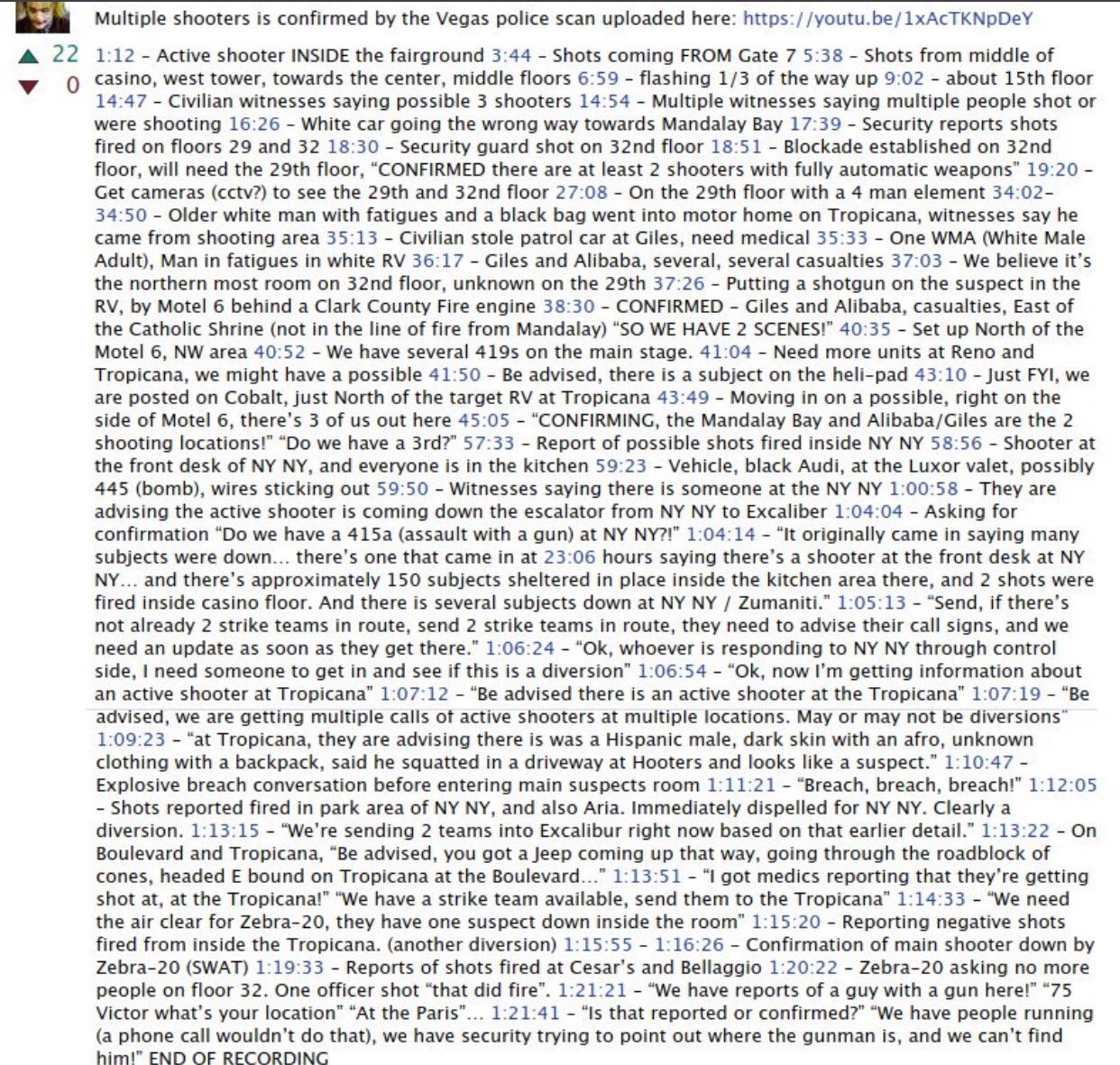 34 thoughts on “SECOND SHOOTING SCENE In The Las Vegas Massacre – Giles And Alibaba – Police Transcript Reveals Much More Than Reported!”