15 March 2017
America is a nation built by immigrants, and on the premise that anyone can make it to the top. While that may be true, most new arrivals find themselves starting at the bottom of the pile. Right across the country, households headed by persons born outside the U.S. earn less than households run by native-born Americans. But that wage gap varies widely per state, from close to $20,000 to less than $1,000. And in some places, the gap is even reversed, in favor of the immigrant households. 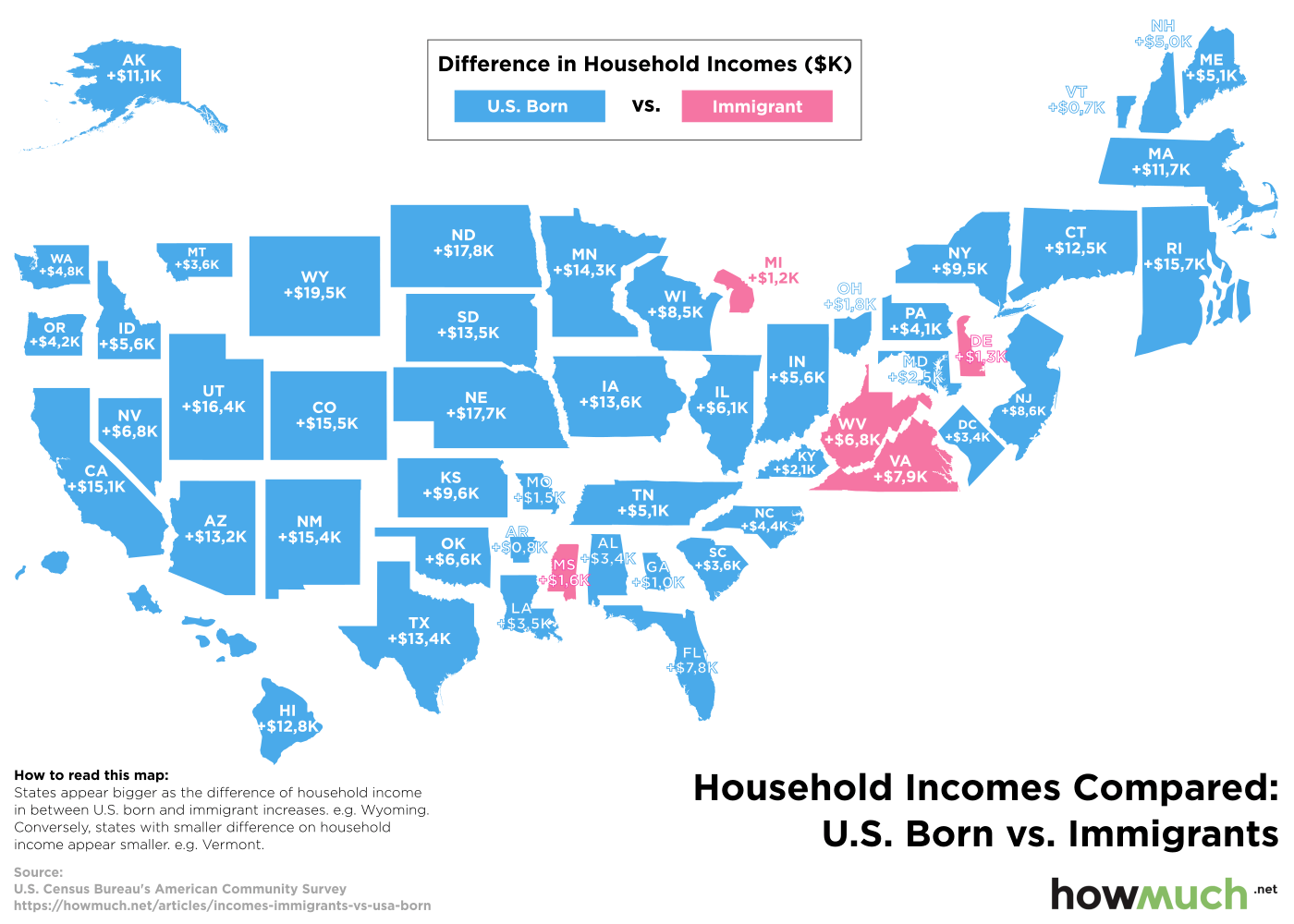 The gap is biggest in Virginia, where immigrant family income is $7,935 higher. Second is West Virginia, with a wage gap of $6,792 to the advantage of immigrant families; followed by $1,582 in Mississippi, $1,299 in Delaware and $1,249 in Michigan. Each of those states is scaled to reflect the size of the wage gap.

The same goes for the other 45 states, the sizes of which also reflect the gap in household incomes between families headed by persons born inside and outside the U.S. Except that in these blue-colored states, it is the native-born families that out-earn the immigrant ones. On average, the worst state to be an immigrant head of a household, financially speaking that is, is Wyoming: the median annual income of a family headed by a person born in the U.S. is $59,689 – more than $19,500 over the median for families led by someone born outside the States: $40,145.

READ  If the Dems can turn 22+ million illegals into citizens then Demonrat rule will be established forever.

The wage gap runs into five digits in no less than 17 states, with North Dakota, Nebraska, Utah, Rhode Island, Colorado, New Mexico and California also showing a discrepancy greater than $15,000. In Minnesota, it’s just over $14,000 and in Iowa, South Dakota, Texas, Arizona and Hawaii it’s all around $13,000. In Connecticut, the wage gap is around $12,500 to the advantage of households headed by a native-born American, while in Massachusetts and Alaska, the difference runs in the $11,000s.

READ  If the Dems can turn 22+ million illegals into citizens then Demonrat rule will be established forever.

The wage gap between families headed by immigrants and native-born Americans dips below four digits in only three states: Georgia ($957), Arkansas ($825) and Vermont ($702). Of course, the wage gap is relative and does not reflect the absolute size of incomes – for either category. Immigrant households earn most in Maryland ($73,723), even though it is not one of the five states where median immigrant incomes are higher than native ones, and its ‘blue’ wage gap ($2,522) is higher than in six other states. The lowest median annual income for households headed by a person not born in the U.S. is in New Mexico ($31,725), even though it is only seventh in the ranking of states with the biggest wage gap to the advantage of native-born households.

While this map shows that households run by people born outside the U.S. are much more likely to earn less – and sometimes a lot less – than those run by native-born Americans, the great variation in the width of that gap also speaks to the hard work and effort with which the newly-arrived are working to achieve their American Dream. And in at least five states, at least on average, it seems they have achieved it.