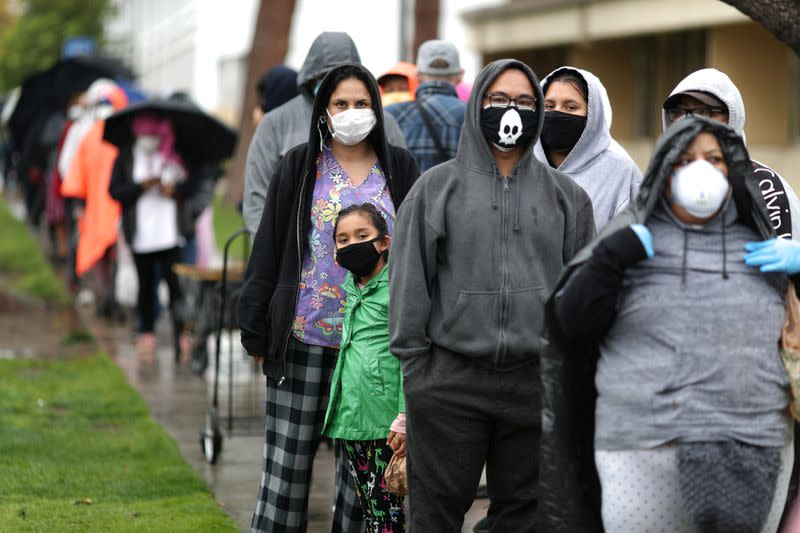 Sign of the times: Mile-long line of cars outside California grocery giveaway

VAN NUYS, Calif., April 9 (Reuters) – A pop-up food pantry in Southern California on Thursday drew so many people that the line of cars waiting for free groceries stretched about a mile (1.6 km), a haunting sign of how the coronavirus pandemic has hurt the working poor.

Hundreds of other people, many wearing trash bags to shelter from the rain, arrived at the one-day grocery giveaway on foot, forming a blocks-long queue in Van Nuys, in the central San Fernando Valley region of Los Angeles.

Organizers said they had enough groceries to hand out to more than 2,500 families, with each receiving a 36-pound (16-kg) box of rice, lentils and other staples as well as frozen chicken, oranges and other foods.

“I have six kids and it’s difficult to eat. My husband was working in construction but now we can’t pay the rent,” said Juana Gomez, 50, of North Hollywood, as she waited for her turn.

The COVID-19 pandemic has shut down nonessential businesses across the United States, with more than 90% of Americans under some kind of stay-at-home order, depriving millions of a paycheck.

Global virus death toll passes 94,000, but some signs of hope

Another horror day of the coronavirus pandemic saw the global death toll pass 94,000, although there were tentative signs of hope that the crisis was peaking in the United States and Europe.

The picture of the unfolding economic catastrophe also became clearer with the IMF warning of a Great Depression and data showing 17 million Americans lost their jobs, but a European Union financial rescue package agreement offered some relief to the barrage of bad news.

Another 1,700 people died in the United States on Thursday, while there were hundreds more deaths across Europe, driving the confirmed global toll above 94,000.

Nearly half of all pandemic fatalities have occurred over the past week.

But authorities in worst-hit Europe and the United States said a slight decline in daily deaths and infections gave reason to hope the worst could be over.

“The fire started by the pandemic is starting to come under control,” said Prime Minister Pedro Sanchez of Spain, where fatalities inched down to 683 from 757 a day before, pushing that country’s total above 15,000.

“Our priority now is not to turn back, especially not to return to our starting point, not to lower our guard.”