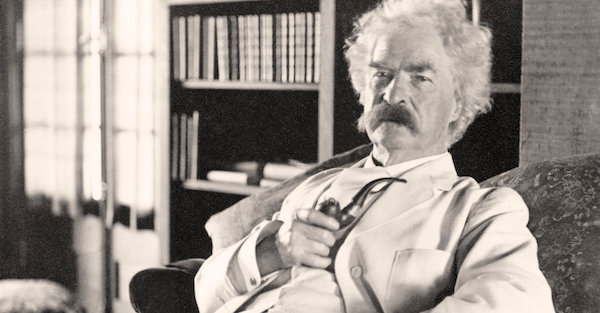 In the late 1800s towards the end of his life, Mark Twain wrote one of his greatest observations of humanity:

“When you remember we are all mad, the mysteries disappear and life stands explained.”

Twain’s quote was primarily a commentary on himself.
A lot of people don’t know this, but Mark Twain went bankrupt late in life.
His enormous fame as an author had brought him substantial wealth. But Twain squandered it all on countless business and investment blunders.
Twain’s publishing company, for example, racked up record sales of its 11 volume “Library of American Literature”.
The problem, however, was that the books cost him $25 to produce… but he only collected $3 up front from customers.
The more volumes he sold, the more money his company lost.
Twain started borrowing heavily to keep his business afloat, eventually mortgaging his home and taking substantial personal loans from wealthy friends.
But Twain was unable to indebt himself back into prosperity, and the company was run into the ground.
Simultaneously Twain made some hilariously boneheaded investments.
He chose NOT to invest in Alexander Graham Bell’s telephone (even though he boasted one of the country’s first telephones in his own home).
Instead Twain dumped more than $40,000 (nearly $1.5 million today) in a failed technology that went bust.
Twain invested in another technology that was supposed to revolutionize steam engines. Per the terms of the deal, Twain paid the inventor a stipend of $35 per week.
Twain wrote in his journal,

He visited me every few days to report progress and I early noticed by his breath and gain that he was spending 36 dollars a week on whisky, and I could never figure out where he got the other dollar.

Twain lost money in the stock market too, famously buying shares of Oregon Transcontinental Railroad at $78 per share, ignoring the stock bubble when it hit $98, and ultimately selling at $12.
Obviously there’s nothing wrong with buying stocks or even making high-risk speculations.
But Twain had an extraordinary knack for massively overextending himself… betting way too much on deals with excessive risk.
Even on the rare occasion that one of Twain’s businesses or investments turned a bit of success, it got wiped out in the Panic of 1893.
Every major newspaper in America picked up on his troubles, publishing stories like “Mark Twain Fails” (Washington Times) and “Mark Twain’s Company in Trouble” (New York Times).
Twain was nearly 60, yet he was totally insolvent and had been publicly humiliated. Even worse, the stress of his financial situation was starting to have a serious effect on his health.
Reflecting on his life, he was probably mystified at where he ended up. But “when you remember we are all mad. . .”
Now, Twain’s story ultimately has a happy ending.
He eventually found the grit and wherewithal to embark on a multi-year speaking tour, giving lectures around the world in places as far away as Australia, Bangladesh, and South Africa.
Today we’d think of these ‘lectures’ as stand-up comedy shows.
Between the tour and the stories he wrote about his travels, Twain managed to claw his way out of debt.
There’s a really fantastic book called Chasing the Last Laugh which chronicles Twain’s misfortunes and speaking tour– I highly recommend it.
I spent much of my holiday break over the past few weeks re-reading parts of the book, and it really drove home a very simple ethos: avoid major mistakes.
Twain made plenty of enormous mistakes, and he suffered dearly for them. His life would have been totally different had he avoided them.
Looking around today I see a multitude of opportunities to make major mistakes.
Nearly every major asset class– property, bonds, stocks, venture capital, etc. is simultaneously at all-time highs with valuations not seen since historic crashes… yet investors keep piling in.
Even emerging asset classes have created spectacular bubbles that have literally never been seen before in history, replete with novice speculators who truly believe that they are hot shot investors despite having zero financial literacy.
Almost every major western government is so deeply in debt that they are officially insolvent, i.e. their debts and liabilities dramatically exceed their assets.
Trillions of dollars worth of debt has been issued by bankrupt governments at NEGATIVE interest rates. It’s insane.
National pension funds, which tens of millions of people depend on, are rapidly running out of money.
These conditions are so irrational, it’s hard to imagine how we even got here. But “when you remember we are all mad. . .” it starts to make sense.
In our upcoming conversations I’d like to dive into these risks in greater detail, and talk about how to avoid major mistakes.
It’s incredible what a profound impact it can have on your life when you follow this rule.
Avoiding major mistakes doesn’t mean hiding in the basement and cowering in fear. It means acknowledging some basic realities, being brutally honest with yourself, and staying rational.
We usually make major mistakes when we’re driven by emotions… especially when those emotions are fear, greed, or ego.
(I’ve committed more than my fair share of those mistakes over the years… though fortunately fewer and fewer of them as time goes on. I’ll tell you some of those stories this week.)
We also make major mistakes when we totally misjudge (or fail to see) obvious risks.
Yet risk assessment is far from rocket science:
If your government is bankrupt, it probably makes sense to diversify a bit. If assets are trading at record high valuations, it might make sense to consider taking some money off the table. Simple.
We’ll discuss all of this in more detail in the coming days. For now, I wish you a Happy, Healthy, and Prosperous New Year. More to follow.

READ  More than 500 people were infected with an unknown disease in Senegal.