US manufacturing is no longer defying China's gravitational pull. The next few months are going to be tough. pic.twitter.com/reDIdP13vE

Another analyst warning of the 'flowless rally.' Citigroup joins Goldman and JPMorgan in warning the equities rally hasn't been matched by inflows into equity funds: "Buybacks, not investor inflows, now drive the US market." pic.twitter.com/DHRfDUZ6Ba

🌍On the subject on softer central bank language. Don't forget the rather looooong time lags before activity responds. And by the way, it's so far only language… pic.twitter.com/MXhcPsRpe3

The Chinese economy is slowing down — on this, almost everyone seems to agree. Last year, official GDP growth in China came in at 6.6 per cent, which beat the official estimate of 6.5 per cent, but was still the slowest mark for the world’s second-largest economy in almost three decades. And it doesn’t look like it’s going to get much better.

Even as there are signs of hope from U.S.-China trade discussions, Premier Li Keqiang, in his opening speech to the annual National People’s Congress earlier this month, downgraded official growth projections for 2019 to a range of six to 6.5 per cent. Even at the top end of that band, this year is shaping up as a new low for economic expansion.

All this of course matters deeply to investors, international businesses and economists. China is the biggest driver of global growth, so its slowdown — or fear of it — is stoking concerns about the prospect of a worldwide recession. It’s no wonder, then, that its economic data are closely watched, analyzed, discussed and debated by market-watchers around the world, especially now.

The Red Ponzi Keeps On Sinking Toward The Flatline

The very heart of the Chinese economic “miracle”, it is now the primary source of its further undoing. The rhythm of decay is, in light of eurodollar acknowledgement, unmistakable. 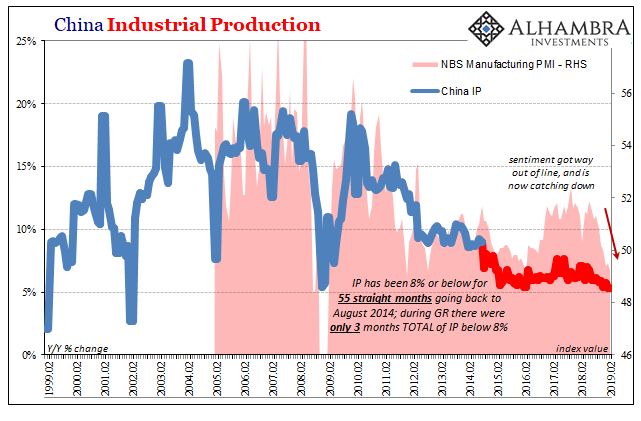