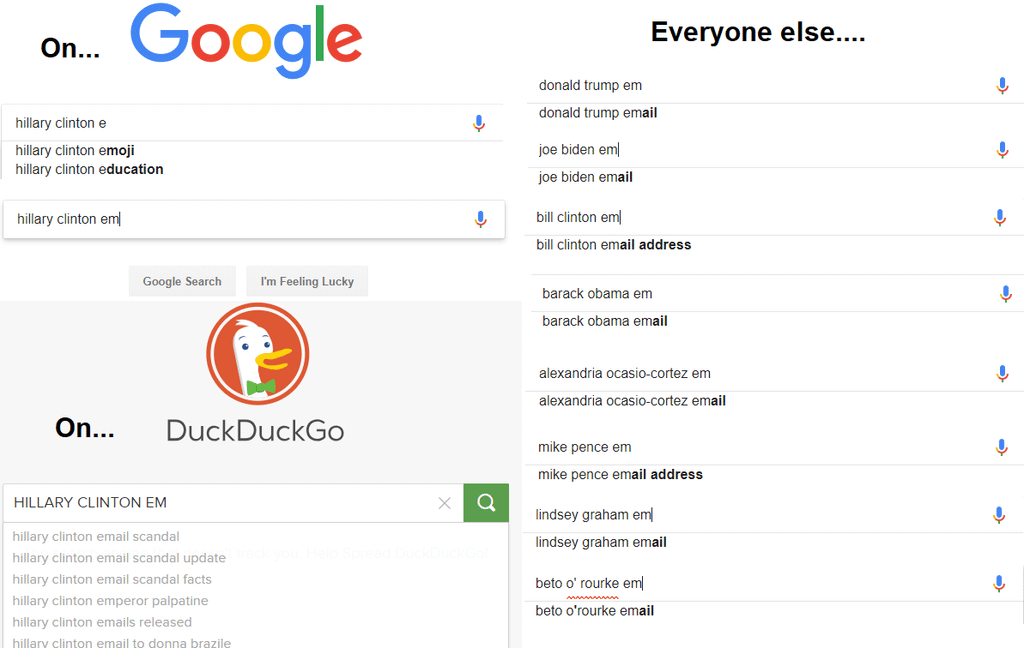 Searching “Hillary Clinton e” produces no mention of email but the 1st autocomplete suggestion is emoji. Adding the m produces no results.

Searching every other politician with “em” gives email as the 1st result.

Taking the search to duckduckgo you get all the results you would expect when typing this in.

I know they’ll be a lot of comments like “why are you bringing up Hillary something bad with Trump must be happening!” but heard someone mention it yesterday and thought it was interesting and I’d share.

I decided to see what google would autocomplete for a semi famous controversial topic during the 2016 Dem Nomination & Final election.

See also  Tucker NAILS IT - "There is something really wrong"

Google won’t autocomplete any of that search even up until the last letter:

Edit: For those interested in the other search results underneath my search request it is interesting for another reason.

Clinton claimed for years that she was named after “Sir Edmund Hillary” who reached Mt Everest’s peak first.

This is impossible because it happened 6 years after she was actually born.

What is actually interesting about Google’s ‘top result’ is a website explaining the reasons why Clinton wouldn’t know any better to claim that & how republicans are horrible for bringing it up as ‘dishonest’ behavior.

So basically anytime she lies Google front loads an article explaining why she may have believed some dishonest behavior to be ‘reasonably ok’.