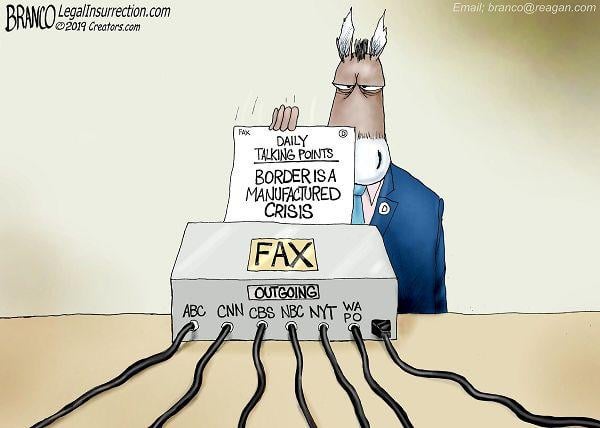 JUST THINK OF THE MEDIA AS DEMOCRATIC OPERATIVES WITH CHYRONS, AND IT ALL MAKES SENSE: The MSM Never Questioned Airing An Obama Speech Despite These 1,063 Examples Of His Lies, Mendacity, Etc.

WIDELY CITED STUDY OF FAKE NEWS TURNS OUT TO BE BOGUS:

Last year, a study was published in the Journal of Human Behavior, explaining why fake news goes viral on social media. The study itself went viral, being covered by dozens of news outlets. But now, it turns out there was an error in the researchers’ analysis that invalidates their initial conclusion, and the study has been retracted.

The study sought to determine the role of short attention spans and information overload in the spread of fake news. To do this, researchers compared the empirical data from social networking sites that show that fake news is just as likely to be shared as real news — a fact that Filippo Menczer, a professor of informatics and computer science at Indiana University and a co-author of the study, stresses to Rolling Stone is still definitely true — to a simplified model they created of a social media site where they could control for various factors.

Because of an error in processing their findings, their results showed that the simplified model was able to reproduce the real-life numbers, determining that people spread fake news because of their short attention spans and not necessarily, for example, because of foreign bots promoting particular stories. Last spring, the researchers discovered the error when they tried to reproduce their results and found that while attention span and information overload did impact how fake news spread through their model network, they didn’t impact it quite enough to account for the comparative rates at which real and fake news spread in real life. They alerted the journal right away, and the journal deliberated for almost a year whether to issue a correction or a retraction, before finally deciding on Monday to retract the article.

Good for them to note the error.

On his quest to help the media reclaim its journalistic integrity, Bruni turned to a laughable source: Disgraced former CBS News anchor Dan Rather, who had to step down in disgrace after using forged documents to “prove” George W. Bush shirked his duties when he was in the Texas Air National Guard in the 1960s and 1970s.

Bruni admitted that the media covered Trump to the detriment of his rivals.

Why did Trump receive so much more coverage than the other presidential candidates, and why was his coverage positive in tone when the Republican race was still being contested and yet negative in tone after it had been decided?

Bruni warned his colleagues in the media about falling for that old “fairness” trap:

Regarding their fitness for office, [Clinton and Trump] were treated identically? In retrospect, that’s madness. It should have been in real time, too.

But we fell prey to a habit that can’t be repeated when we compare the new crop of Democratic challengers to Trump and to one another. We interpreted fairness as a similarly apportioned mix of complimentary and derogatory stories about each contender, no matter how different one contender’s qualifications, accomplishments and liabilities were from another’s. If we were going to pile on Trump, we had to pile on Clinton — or, rather, keep piling on her.

As John Hinderaker writes at Power Line, Bruni’s column is “unintentionally revealing. It is headlined, ‘Will the Media Be Trump’s Accomplice Again in 2020?’ As though the press were pro-Trump in 2016! ‘We have a second chance. Let’s not blow it.’ A second chance to help a Democrat beat Donald Trump.”

But we’ve been here before with a prominent Democratic Party activist with a byline, at least once. As I wrote in a 2012 post at Ed Driscoll.com titled “Our Advocacy-Obsessed Apparatchik MSM,” the DNC-MSM are always looking for an excuse to junk even the appearance of a veneer of fairness.

In October of 2004, as the presidential election was entering the final stretch, and with RatherGate then freshly in the media’s collective mind, Mark Halperin, then the ABC News political director, drafted an internal memo that stated both political parties were not equally accountable, as Matt Drudge noted at the time:

The controversial internal memo obtained by DRUDGE, captures Halperin stating how “Kerry distorts, takes out of context, and mistakes all the time, but these are not central to his efforts to win.”

But Halperin claims that Bush is hoping to “win the election by destroying Senator Kerry at least partly through distortions.”

“The current Bush attacks on Kerry involve distortions and taking things out of context in a way that goes beyond what Kerry has done,” Halperin writes.

Halperin’s claim that ABCNEWS will not “reflexively and artificially hold both sides ‘equally’ accountable” set off sparks in St. Louis where media players gathered to cover the second presidential debate.

Halperin states the responsibilities of the ABCNEWS staff have “become quite grave.”

In August, Halperin declared online: “This is now John Kerry’s contest to lose.”

And concurrently, the media raise their opinions of George W. Bush and his late father in order to bash the current man with an (R) after his name in the White House. Old and busted: Texas man bad. The new hotness? Orange man bad.