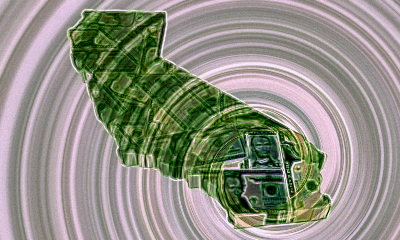 Southern California’s economy is growing at its slowest pace in more than seven years, according to an index from the Federal Reserve Bank of St. Louis.

To create regional indexes that track a region’s business output, Fed researchers reviewed a dozen economic benchmarks — from jobs and salaries to construction permits to bank profits and gross metropolitan product. The results mirror the economic growth of 66 metropolitan areas.

The latest results, as of June, show the economy of the metro area of Los Angeles and Orange counties growing at a 2.7 percent annual pace — No. 49 out of 66 nationally. That’s the slowest expansion rate since August 2010 — early in the recovery from the Great Recession — and down from 3.7 percent growth a year ago when L.A.-O.C. was 19th best. Since 1990, the two-county region has averaged 2.5 percent annual growth.

In Riverside and San Bernardino counties, business growth by this St. Louis Fed measure was 3.7 percent annualized in June, 33rd nationally and slowest since January 2011. That’s quite a cooling from 5.5 percent a year earlier when the Inland Empire ranked No. 5 in the U.S. Since 1990, this two-county region has averaged 3.6 percent annual growth.

Yes, the local chill is still growth, just less of it. But it’s not what’s showing up in many places elsewhere. Median growth rate among these 66 metro areas is improving, by the St. Louis Fed’s math: increasing 3.6 percent as of June up from 2.9 percent 12 months earlier.

READ  California's brilliant plan to setup homeless tents in parking lots - only $2,600 per tent per month

Fastest growing U.S. metros in June? Portland was best at 8.3 percent, then Las Vegas at 7.1 percent and Bridgeport-Stamford, Conn. at 7.07 percent. June’s laggards? New Orleans was worst, down 1.5 percent, then Baltimore, up 0.6 percent, and St. Louis, up 1.4 percent.