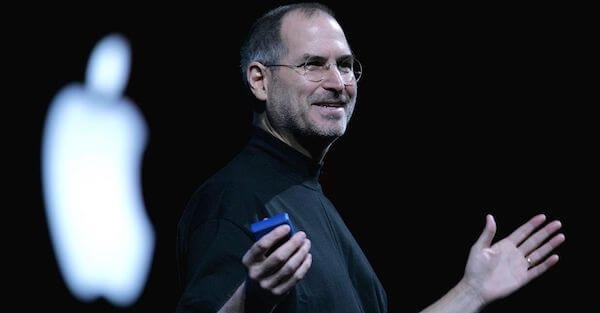 One of the most brilliant businessmen of our time decided to do nothing.

In 1997, after being kicked out of his own company, Steve Jobs took back the reins of Apple.

At the time, Apple had less than 4% of the personal computer market. And the market didn’t think Apple could do anything more than corner its little niche (while Windows/Intel maintained the lion’s share).

“Steve, this turnaround at Apple has been impressive. But everything we know about the PC business says that Apple cannot really push beyond a small niche position. The network effects are just too strong to upset the Wintel standard. So what are you trying to do in the longer term? What is the strategy?”

Jobs answer was unexpected, but simple… “I am going to wait for the next big thing.”

Jobs knew there wasn’t anything compelling at the time.

One of the greatest visionaries of our time, didn’t try to force a strategy or BS Rumelt with business school jargon about “sticking to Apple’s core competencies” or “improving margins through synergies”…

He just waited until he spotted the next BIG opportunity.

At the time, in the late 90’s, the PC market was changing rapidly. And Jobs knew there would be major, technological advances that he could capitalize on… he had already successfully done it with the Apple II, the Macintosh and at Pixar.

And only two years after Jobs decided to “wait for the next big thing,” he introduced the iPod, which revolutionized the music industry. Then he did it again with the iPhone. The rest is history…

The result of Jobs’ do-nothing strategy pushed Apple to become the first publicly traded company with a $1 trillion valuation.

I’m telling you this story because, often times, in both business and investing, the best strategy is to simply do nothing.

Warren Buffett, the greatest investor in history, is a strong adherent to that strategy.

Buffett says that if every investor was given a punch card with 20 slots, representing the 20 investments you could make in your lifetime, their results would no doubt improve.

It’s great advice. And we’ve been saying the same thing for awhile now.

We work very hard for our money. And it makes sense to treat it with great care.

If you don’t see a compelling investment, there’s no need to force it. Sometimes the best thing is to do nothing.

The markets are crazy today. Almost every asset is at or near an all-time high (measured by the CAPE ratio, price-to-revenue, total stock market to GDP, you name it…).

It’s pretty clear things are either a top, or they’re forming a top.

Nobody has a crystal ball, but in the absence of any really compelling opportunities, it makes sense to sit on the sidelines.

And it turns out, you may not even be giving up that much return by doing so…

Bessembinder looked at the performance of publicly traded companies over the past 92 years. There were plenty of ups and downs over that period.

He wanted to see if buying and holding stocks performed any better than owning one-month Treasury bills.

The result is pretty shocking…

He found that only 4% of listed companies were responsible for 100% of the net gain for the entire stock market.

The other 96% performed just as well as one-month Treasury bills.

So over the past 92 years, you could get the same return as you would get from 96% of all listed companies by just holding T-bills.

As much as I begrudge loaning the federal government any money, it’s certainly safe to say that T-bills are one of the most liquid and least volatile assets in the world. It’s a cash equivalent.

I’m not sure if the government has the ability to repay its 30-year bonds. But I’m pretty sure Trump won’t default in the next 28 days.

And, while you’re waiting for the next big thing, you can still earn 2.25% in one of the world’s safest assets.

That makes a lot of sense to me.