The Heart of the Matter
by John Hussman of Hussman Funds

Let’s be clear. October’s market decline was a rather mild warning shot. At its lowest close, the S&P 500 lost -9.9% from its September peak, before rebounding in recent sessions. As I noted during the 2000-2002 and 2007-2009 collapses, intermittent “fast, furious, prone-to-failure” rebounds are among the factors that encourage investors to hold on through the entirety of major declines. After particularly severe down-legs in the market (which we have not yet observed), these rebounds can extend for weeks, and sometimes approach gains of as much as 19% before the market plunges again. 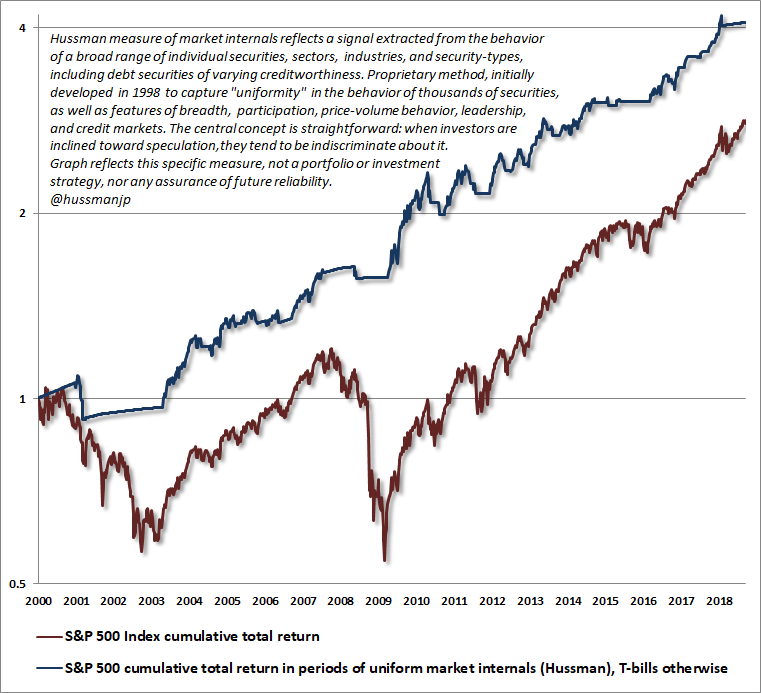 Get used to that kind of volatility. Though it will be essential to monitor market internals for periodic shifts in investor psychology, by the completion of the current market cycle, I continue to expect the S&P 500 to lose nearly two-thirds of its value.

It’s been nearly a year now since we finally identified and fully addressed the core of our difficulty in the half-cycle advance since 2009. In my view, this is such a critical moment in the markets that a careful understanding of that core issue is essential. Though portions will (hopefully) be familiar, I can presently think of no other topic in finance for which the time spent reviewing and understanding will be as valuable.

The heart of the matter, and the key to navigating this brave new world of extraordinary monetary and fiscal interventions, is to recognize that while 1) valuations still inform us about long-term and full-cycle market prospects, and; 2) market internals still inform us about the inclination of investors toward speculation or risk-aversion, the fact is that; 3) we can no longer rely on well-defined limits to speculation, as we could in previous market cycles across history.

Read the full article on AdvisorPerspectives.com