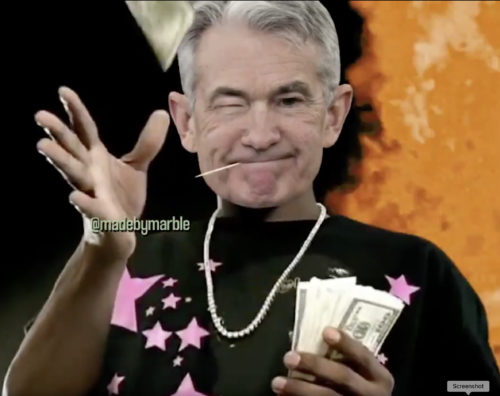 The past week has been a story of stagflation infecting the US economy while the stock market grimaces as Fed officials express the need to start a gradual pullout from economic stimulus much sooner or face a rapid pull-out a little later. Word on the Street has been that inflation is coming hot and heavy and here to stay:

“Our take on inflation is that — whether it’s structural or transitory — at the very least, this is going to be structurally transitory, and this is not going away anytime soon,” said Hetts, whose London-based firm managed more than $427.6 billion as of June. “Inflation is just one risk in people’s portfolios….” A quarterly survey by UBS Group found that 57% of U.S. investors with at least $1 million of assets to invest think that inflation will accelerate over the next 12 months.

Company mentions of inflation on earnings calls jump to record levels, accelerating as businesses tracked by the S&P 500 index report their latest quarterly results, according to research from Bank of America … with “inflation” mentions soaring about 1,100% year-over-year…. That exceeds the year-over-year jump of 900% that was seen in the previous quarter.

The upward movement we’re seeing in prices is not transitory and big tech will suffer from it, says one financial adviser. “Wages are going up and typically what happens is they just don’t go down over time….” Chris Payne of Payne Capital Management told Yahoo Finance Live. “Even if you’re going out to the grocery store, things are just more expensive. So not only do I think inflation is not transitory, I think it’s here to stay. And I really think it will impact different markets,” he added…. “I think big tech is going to face the biggest headwind when it comes to inflation….” Payne’s comments are in stark contrast with Fed Reserve Chairman Jerome Powell’s repeated comments that inflation is transitory.

Investors are struggling to discern the path forward and have lately focused on signs of inflation, which could lead the Fed to lift interest rates.

These are the tales that I’ve said would come to dominate the year. Now they are here.

On the other hand, investor hopes should be buoyed by signs of a collapsing economy. So, that’s good news!

Investors considered a much weaker-than-expected report on private payroll growth last month. ADP reported that private-sector employers added back just 330,000 jobs in July, or fewer than half the expected gain of 690,000, according to Bloomberg consensus data.

The Fed, after all, has said its determining factor for when to raise interest rates and roll back bond purchases will be the return of a recovered and healthy jobs market. It looks like that fantasy is falling further away.

That, as I’ve been saying, is exactly why the Fed will find itself (or already does find itself) trapped into keeping its economic stimulus fully empowered. Which means you can expect plenty more where that came from.

See also  CRISIS BY DESIGN: A major border city is on the brink of collapse because of Biden’s immigration policies, local official says.

Not everyone at the Fed is comfortable with the Fed’s continued economic stimulation:

The Federal Reserve should start reducing its $120 billion in monthly bond purchases this fall and cut them “fairly rapidly” so the program ends in the first months of 2022 and paves the way for an interest rate increase that year if needed, St. Louis Federal Reserve president James Bullard said on Friday.

In what amounted to a warning that his Fed colleagues risked a “scramble” to hike interest rates – and possibly spark a recession – if inflation remains high, Bullard said it was time to start accounting for that risk now.

“We are tilted too much to the dovish side,” Bullard said in comments to reporters, urging the Fed to decide at its September meeting on a plan to phase out its bond purchases by the end of March, 2022. “The whole central bank community has been in dovish mode for a long time. If the data shift against us we may have to move quickly, and that can be disruptive.”

On the income side, private wages are up 11.5% YoY while government workers’ wages are rising at a record 8.1% YoY…

Finally, and perhaps most importantly, The Fed’s favorite inflation indicator – PCE Core Deflator – rose to +3.5% YoY (vs 3.4% in May), the highest since July 1991…

Looks like their back is already to the wall. In summary, we have rapid inflation pounding away at the producer side in the form of high wage increases creating the certainty of surging inflation on the consumer side, pressing the Fed increasingly hard to curtail its loose and easy economic sluttery sooner than later, even as its jobs goal forces it to hang loose longer in spite of rapidly rising wages.

Meanwhile, last week, we experienced our first trillion-dollar, orgasmic reverse repo operation as the proof of how loose the Fed has been. The scream heard overnight from the RRP facility is that of a central bank trying to secretly suck money out of the economy on one end as fast as it is pumping it in on the other end, which it does for one reason more than any other: This salacious mistress must please her master — the one who allows her to exist for his pleasure.

The Fed must fund the US government and keep the government’s bond interest rates where the government needs to be while denying that it is doing that because it’s kind of, sort of … well … illegal for the Fed to be playing the whore for money with the federal government by buying US bonds for the sole purpose of funding the US government, rather than out of the purity of monetary policy goals, but who cares?

Here is a graph of just how much monetary policy does not need this endless liquidity pumping:

That is a picture of banks throwing off cash as fast as they can (a trillion dollars plus rolling over night after night (so to speak) in exchange for some of those treasuries the Fed is hosing up. It is a measure of how much monetary slop the Fed is having to sop back up as spillage from its pleasuring of the US government.

See also  A woman had to move out of her tiny home after 1 day because the city threatened to fine her $1,000 a day

And, yet, the Fed cannot let up now because recovering GDP, as reported last week, only grew by 6.5% as compared to the 8.5% that economists expected. Even with all this stimulus, the economy is showing signs of exhaustion, instead of the full recovery from the rapid takedown forced upon it by the the global governments’ shutdowns of everything.

That is the Fed’s back to the wall as the government pounds away with free money to the masses to keep the dying economy feeling alive!

It was good while it lasted, but the party is finally ending. One day after we reported that unemployed households which no longer receive emergency benefits are suddenly spending far less, and on the same day we read about an “unprecedented spike” in evictions as foreclosure moratoriums end, the only thing missing was a sellside downgrade to the US economy. Well, we got just that early this morning, when Goldman … cut its 2021 second half consumption growth forecast, resulting in 1% downgrade to its GDP growth forecasts … as it is becoming apparent that the service sector recovery in the US is unlikely to be as robust as the bank had expected. Which is odd considering the trillions in monetary and fiscal stimulus that have entered into the economy. One wonder how many more trillions would be needed for Goldman to be happy.

Oh, but wait! That was Goldman’s revised set of expectations BEFORE Q2 GDP was reported, and look at how extreme to the optimistic side their downwardly revised expectations remained.

Our revels now are ended, and stocks are just starting to feel the burn.