I’ve talked much about the looming pension crisis lately.

The bad news is that the problem is approaching a breaking point, and yet everyone seems to ignore it.

The good news is we’re starting to get data that might shake people out of their denial.

A new Harvard study funded by Pew Charitable Trusts uses “stress test” analysis to see how retirement plans in 10 selected states would behave in adverse conditions. (It’s similar to what the Federal Reserve does for large banks.)

The Harvard scholars looked at two economic scenarios, neither of which is as stressful as I expect the next downturn to be. But relative to what pension trustees and legislators assume now, they’re devastating.

Scenario 1 assumes fixed 5% investment returns for the next 30 years. Most plans now assume returns between 7% and 8%, so this is at least two percentage points lower. Over three decades, that makes a drastic difference.

Scenario 2 assumes an “asset shock” involving a 20% loss in year one, followed by a three-year recovery and then a 5% equity return for years five through year 30. So, no more recessions for the following 25 years. Exactly what fantasy world are we in?

But these models are just that—models. Like central bank models, they don’t capture every possible factor and can be completely wrong. Whether they really help or not remains to be seen.

States That Are Most Likely to Go Bankrupt

Crunching the numbers, the Pew study found the New Jersey and Kentucky state pension systems have the highest insolvency risk. Both were fully funded in 2000 but are now at only 31% of where they should be. 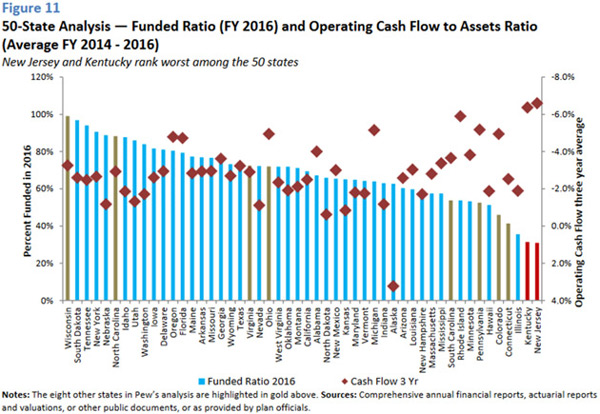 But that’s not all.

Even if you are in one of the (few) states with stable pension plans, you’re still a federal taxpayer, and that’s who I think will end up bearing much of this debt. That’s right, it is simply debt.

The Money Is Simply Not There

All these people think someone owes them something. In many cases, they’re right. But what happens when the assets aren’t there?

A new report shows why this is true. It notes that the unfunded liabilities of state and local pension plans jumped $433 billion in the last year to more than $6 trillion.

That is nearly $50,000 for every household in America. The report is far more alarming than the report from Harvard. They believe that the underfunding is more than 67%.

There are several problems with this.

First, there simply isn’t $6 trillion in any budget to properly fund state and local government pensions.

Second, we all know about the miracle of compound interest. But in this case, that miracle is a curse.

This means in six years, without the $6 trillion being somehow restored (magic beans?), pension underfunding will be at around $8.4 trillion, even if nothing else goes wrong.

Worse, the level of underfunding will rise dramatically during the next recession. Total US government debt from top to bottom will be more than $40 trillion only a few years after the start of the next recession. Again, not including unfunded liabilities.

I wrote last year that state and local pensions are The Crisis We Can’t Muddle Through.

That’s still what I think. I’m glad officials are starting to wake up to the problem they and their predecessors created. There are things they can do to help. But I think we are beyond the point where we can solve this without serious pain for many innocent people.

Like the doctor says before he cuts you, “This is going to hurt.”

This is not going to be the end of the world. We’ll figure out ways to get through it as a culture and a country. The rest of the world will, too, but it may not be much fun. Just ask Greece.