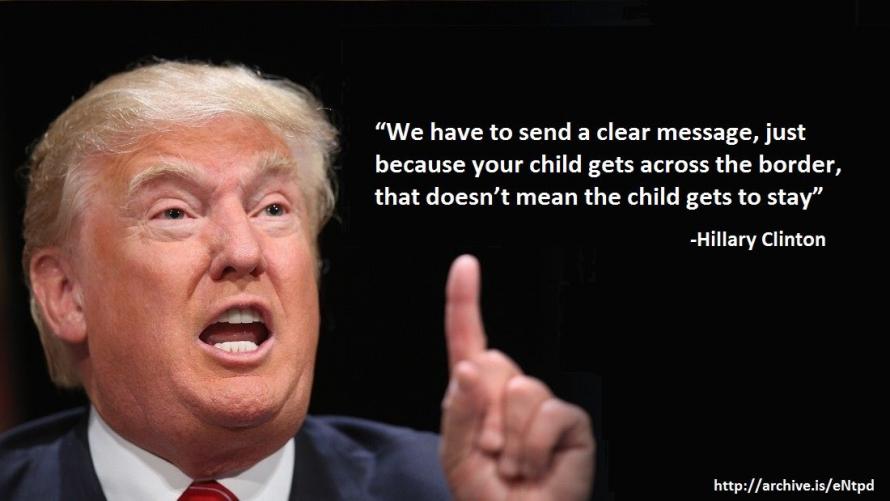 The left now goes all in, as the POTUS vows to stop illegal immigration and the invasion of our country from the South. Basically, the DEMs and their lapdog-media pundits have decided to make a stand on this issue of allegedly separating the children of illegal aliens from their parents who have entered the US with zero respect for the law of the land. As in illegally, of course. The “progressive” left is now willing to risk everything, as they seem to believe they have the “winning issue” to break Trump. Again. The defiant POTUS is digging in his heels in return, thus making a final stand. Drama aside, here’s the deal: the Democratic party is now accusing Trump of engaging in torture, child abuse and gross violence of human rights.  And this is not a joke, but Trump derangement syndrome at its peak stupidity. The mainstream media is now saying that Trump is a fascist (and literally Hitler) for separating the children of illegal aliens from their parents as they’re being detained.

As all of this is going on, Hollywood  too has now moved in heavy against the POTUS, missing yet another opportunity to shut up, sit down and do their job (as in make-believe stuff), but the cherry on top is represented by establishment Republicans, also known as RINOs, led by the Bush family, who are now saying that Trump’s policies are inhumane and heartless, with Laura Bush comparing them to the internment of Japanese Americans during WW2. Trump openly told the media that America will not go down the road of Germany or Sweden, i.e. the land of the free, home of the brave will not be turned into a third world shithole migrant camp. Not under his watch anyway. Check out this cool video:

In Europe, untold (and unknown) millions of unvetted illegal migrants from Africa and the Middle East were let in by the EU’s crazy and suicidal open borders policies, resulting in an unprecedented crime wave, radical demographic change, terrorism,  huge pressure on social-welfare systems (Cloward-Piven strategy 101) and societal collapse in many parts of Europe (read no-go zones, big city areas that look like third world countries etc). Oh, and a populist wave that is sweeping Europe as we speak (that’s the good news by the way).

What the media and the DEMs are now basically saying is that American citizens who commit crimes can be separated from their children. But illegal aliens get special treatment, despite them entering the US illegally and criminally. I know, laws suck if you’re a leftie, but you’ll have to learn to deal with it. According to the standard the unhinged left is now trying to impose on America, we’ll soon be living in a 2-tier justice system and a 2-tier society, in which illegals are given preferential treatment over Americans. That is the crux of the issue, and the reason they want this is because they want to import millions of DEM voters.

Democrats are the problem. They don’t care about crime and want illegal immigrants, no matter how bad they may be, to pour into and infest our Country, like MS-13. They can’t win on their terrible policies, so they view them as potential voters!

Their official policy is that the US and especially Trump is are not allowed to deport illegals, nor to separate them or detain them, never mind prosecute them. They want catch and release, plain and simple. All they care about is the votes. That’s the truth, cut and dried. Contrary to all of the lies pedaled by the left wing corporate media, who is comparing the detainment of illegal aliens’ children to WW2 concentration camps, slavery or even death-camps, here’s the truth:

To summarize it for you liberals, follow the law, keep your kid. Break the law and get separated, just like any other law breaker in this country who gets caught and ends up in jail. Leftists never have arguments when presented with facts. That is why they present their false ideology on emotion. If the facts of progressivism and the Marxist philosophy behind it become widely known, their useful idiot followers would flee in droves. That is why it is cradle to the grave indoctrination and absolutely no tolerance for counter philosophy (constitutionalism/individual liberty).

The problem with communists and social justice warriors is that they never care about facts, but “the Internet Never Forgets”:

Wow. Obama really did agree with @realDonaldTrump on Immigration.

Show this to your friends. pic.twitter.com/oQGcz5Ng87