See the bottom of the article for an important last minute update on the BBC, Boris Johnson and the UK election.

The terrorist was previously known to MI5, having previously been released from jail for committing terrorist offences. 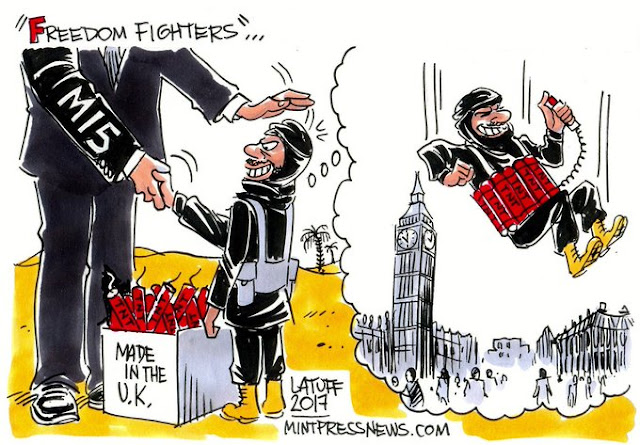 The London Bridge Attack should never have happened.
It illustrates the dangers of releasing too early from prison “serious jihadists” as the judge presciently put it at the time.
www.telegraph.co.uk/news/2019/11/30/london-bridge-terror-attack-usman-khan-know-suspect/ 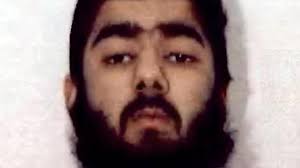 Sky News happened to be filming  the ‘elite’ unit who “saved the day” during the London Bridge Attack. A BBC reporter also happened to be there when the incident began.
twitter.com/OffGuardian0/status/1200568764963708928 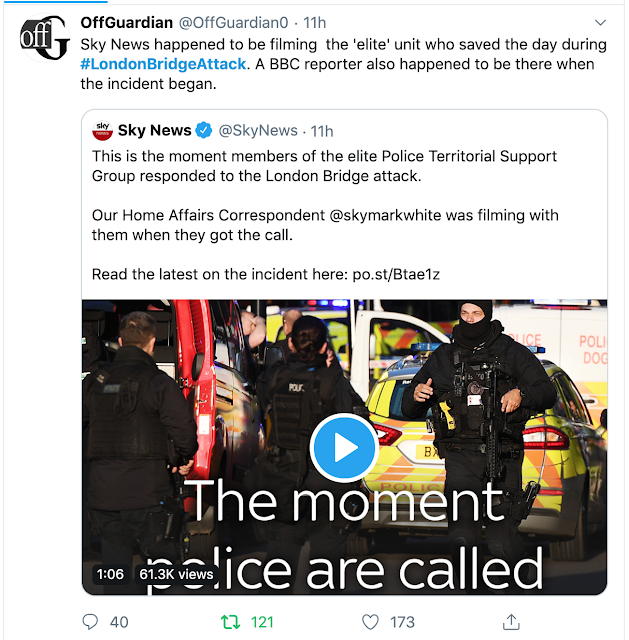 The UK General Election was 13 days away on the day the attack took place.
Boris Johnson is running partly on a platform of Jeremy Corbyn “being weak” on anti terrorism.
The UK disinfo Corporate Media and the UK Establishment is supporting BoJo’s campaign messaging.

The UK’s Neoliberal and Right Wing Press (including the BBC, Sky News and the “liberal” Guardian) are all actively campaigning against Corbyn with a constant barrage of ridiculous 100% false smears (e.g. he’s a “Kremlin bot” and false antisemitism / racism smears).

The terrorist attack will bolster BoJo’s support and weaken Corbyn’s in the coming election.

The Neoliberal media will certainly push this. They are currently operating 24 hours a day coverage of the attack to ram home the message into the public’s conscious and unconscious mind.

Irrespective of the fact that Tony Blair, David Cameron and Theresa May have all actively encouraged, supported, recruited and/or funded al-Qaeda and/or ISIS terrorist groups and have been actively encouraging terrorist attacks in the UK, Europe and elsewhere for well over a decade, to pass things like “Snoopers Charter” and thousands of CCTV cameras to spy on everyone.
.
The Corporate and government controlled media will of course never mention this.

Exactly the same thing happened immediately before the UK’s June 2017 election.
5 days before voting day, there was another terrorist attack near London Bridge.
N.B. there is a famous mathematical relationship between the numbers 5 and 13. Kudos to anyone who knows what it is.

Again the terrorists were previously known to MI5, but MI5 did not prevent the attack.
See references to Rachid Redouane in the article below. 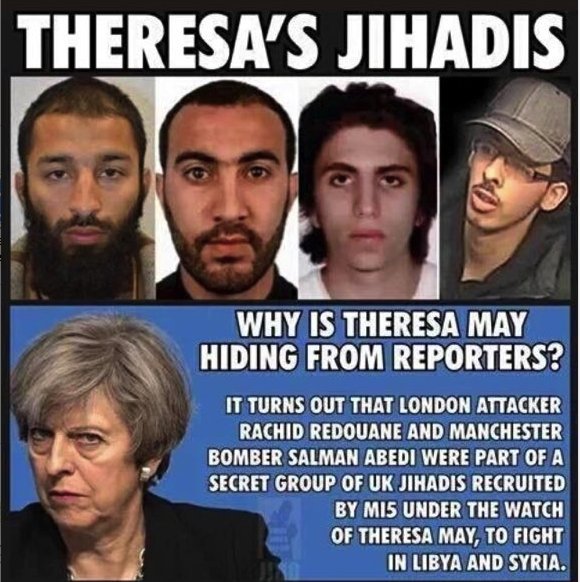 Only a short time earlier in May 2017, the Manchester Bomber Salman Abedi had murdered 22 people in the Manchester Arena at an Ariana Grande concert.

Salman Abedi and his family were known al-Qaeda supporters, living in Manchester.

Theresa May was responsible herself as Home Secretary in 2011, for lifting the travel restrictions to allow the Abedi family to travel to Libya to join US and UK government backed al-Qaeda affiliated terrorist groups fighting in Libya as part of the Neocon and NATO Regime Change War to topple Gaddafi.
Salman Abedi was brought back to the UK from war torn Libya, aboard a Royal Navy ship and then allowed to carry out the Manchester bombing unhindered by MI5 or the police, a couple of years later.

Why was such an obvious terrorist threat brought back from terrorist infested Libya to the UK, by the Royal Navy?

How could such an obvious terrorist threat operate unhindered to prepare the bomb and blow up the Manchester Arena?
What happened to all the Snoopers Charter Surveillance?
Why weren’t MI5 constantly monitoring his activities and his associates? 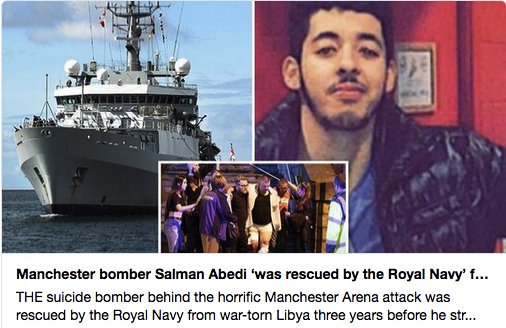 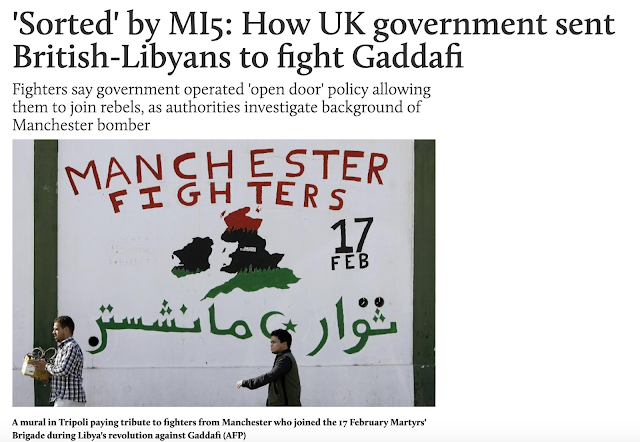 The UK government is allied with the Salafi / Wahhabi barbaric Despots of the House of Saud in Saudi Arabia.
The Saudi government is responsible for spending £100m’s every year in spreading the extremist ideology of Wahhabism – the same ideology as al-Qaeda and ISIS.
This recruits more terrorist extremists from among disenchanted susceptible youths and young adults.

The Saudi government does this by funding extremist mosques, hate preachers and madrassas, in the UK, throughout Europe, throughout North Africa, and in Sunni parts of the Middle East and throughout South East Asia.

The Saudis and other Gulf Arab States are the Wellspring of Islamist (Wahhabi) terrorism throughout the world.
N.B. Wahhabism is NOT Islam. It is an extremist derivative of Islam. Like the Moonies or the Klu Klux Klan are extremist derivatives of Christianity.

The U.S. and UK governments ENCOURAGE the radicalization of susceptible youth among their domestic populations and in Europe, so that terrorist attacks will occur in the West and provide the pretext for massive military budgets, massive spy agency budgets, panopticon surveillance and other draconian laws to reduce civil rights with the aim of imposing a militarized Police State for domestic control. 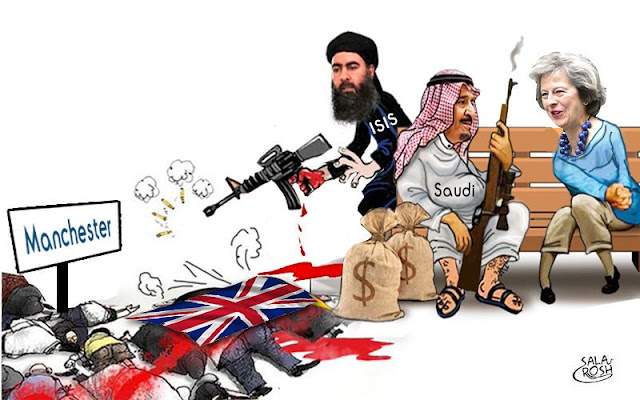 The latest terrorist attack may be real, or it may have been engineered by Boris Johnson’s UK government and MI5.
I doubt we shall ever know. The terrorist is now conveniently dead so we won’t know his motives, mental state, or any recent interactions with UK government authorities or radicals.

But it is part of a larger pattern where Terrorist “Events” are encouraged and used by Western governments and Israel, to pursue the wider agenda of Militarism, Mass Surveillance, Censorship, Domestic Political and Social Control, and Regime Change Wars in the Middle East.

Increased al-Qaeda type Wahhabi terrorist activity is a primary objective of the Israeli government to encourage U.S. military and other intervention for Regime Change Wars in the Middle East against Israel’s enemies.
The massive increase in the number of refugees is also encouraged by the Israeli, U.S. and UK governments to destabilize Europe for further militarism, more wars, surveillance, and further draconian laws to control their domestic populations.
Wars always create refugees. And large numbers of refugees destabilize countries and regions.

The Neocon Wars were the primary cause of the 2015/2016 EU “refugee crisis”.
The secondary cause was Merkel’s “Everyone Welcome” statement to encourage more of the dispossessed to try and illegally enter the EU from North Africa, Turkey and elsewhere.

If you really supported refugees, you would demand that the Neocon Wars immediately end, the U.S. UK and France would end their illegal occupation and War of Aggression against Syria, to prevent more refugees being created and allow a large number of existing refugees to go home.

If you really supported the Troops or the countries of Europe, you would be demanding the same.

You would also be demanding the U.S. UK and other governments immediately cease their support of the barbaric Despots in Saudi Arabia, stop selling them arms, and sanction them for supporting terrorism – whether that be funding or arming al-Qaeda or ISIS directly, or recruiting more terrorists by funding extremist Wahhabi mosques, extremist Wahhabi hate preachers and extremist Wahhabi madrassas (schools). 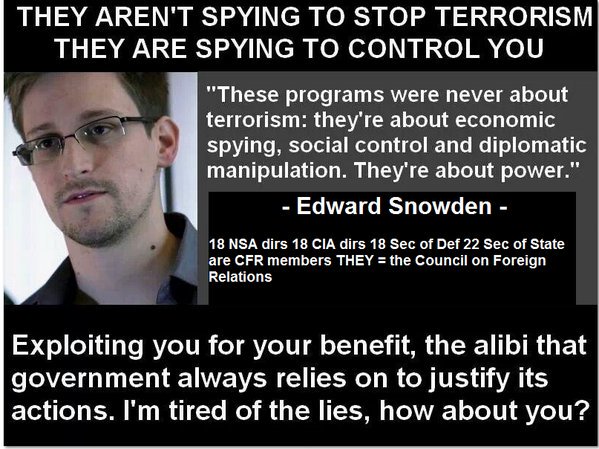 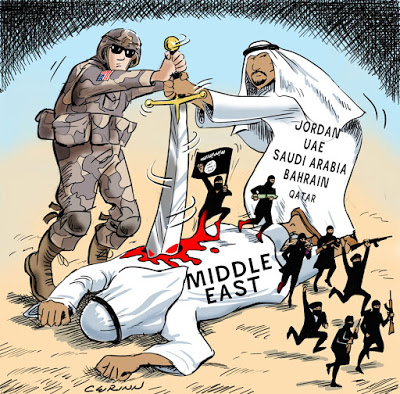 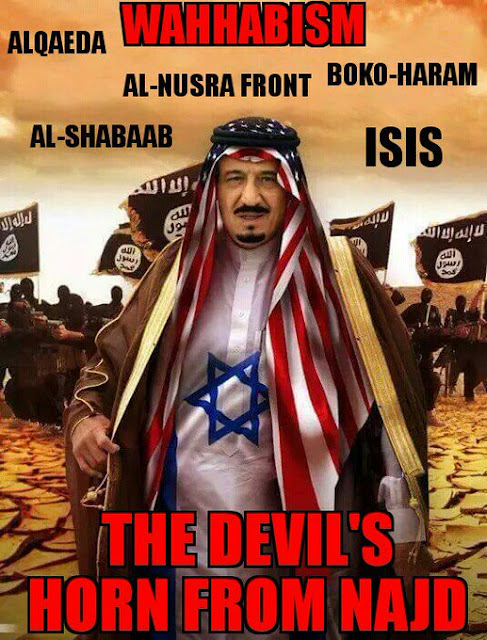 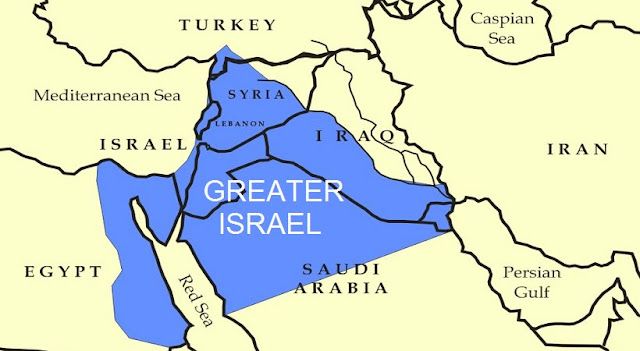 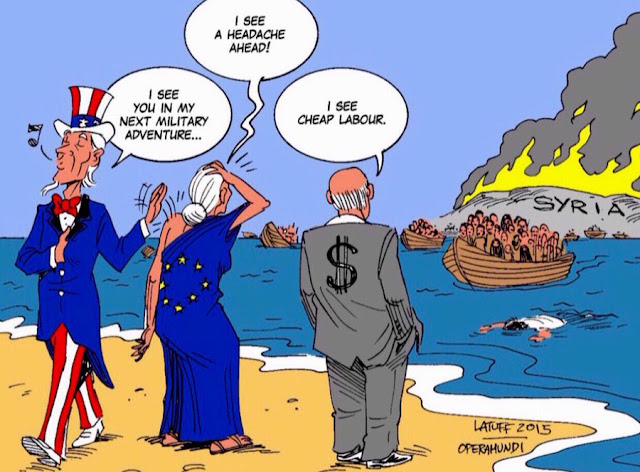 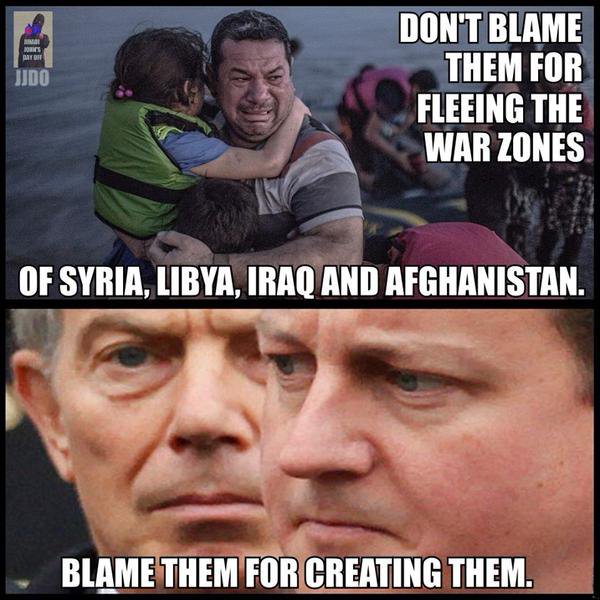 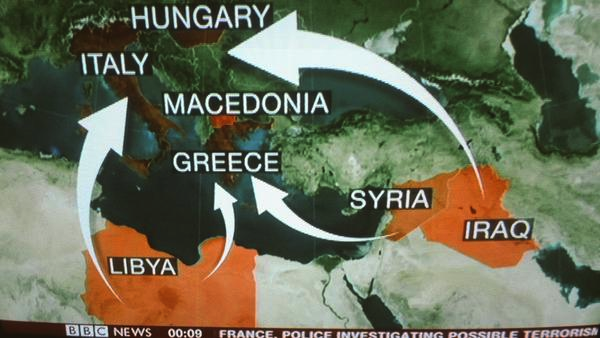 Not suspicious at all!

The BBC a few minutes ago, announced they have just caved in and will now allow Boris Johnson to have a soft soap “interview” from anti democracy, Neocon / Neoliberal Fascist disinfo propaganda hack Andrew Marr, including pushing blatant Neocon disinfo propaganda on the London Bridge Terrorist attack, after previously saying BoJo couldn’t have a Marr interview without first doing a tough Andrew Neil interview where he would be grilled and put through the wringer – like the other Party Leaders.

The BBC, MI5 and the government controlled Board of Governors and Editorial Heads are SO transparent. 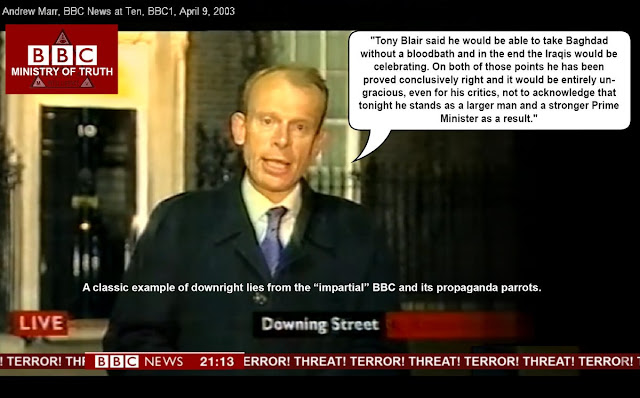